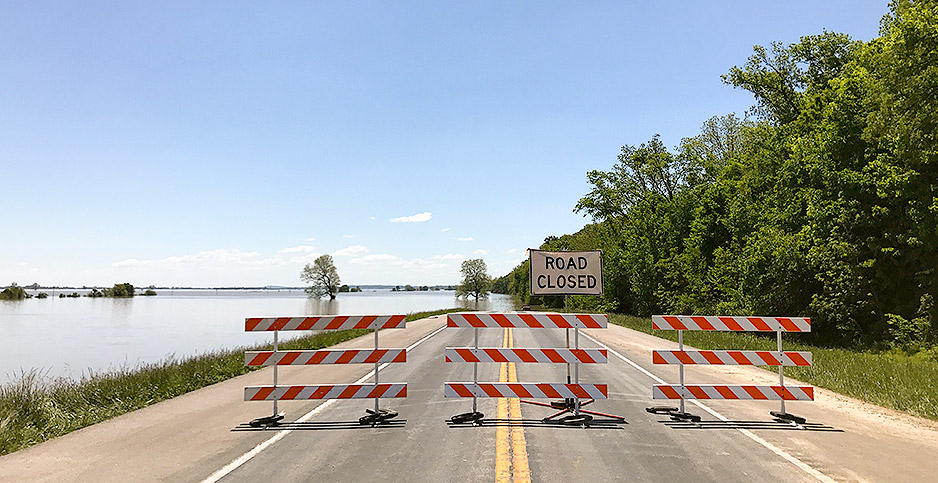 CAPE GIRARDEAU, Mo. — Dewayne Schaaf is at the top of the courthouse steps with his two children on a perfect spring night, looking down the hill to the riverfront where almost 46 feet of water is pressing up against the flood wall that keeps the Mississippi River from pouring into the historic downtown.

"This has happened twice, gosh, in what, the last 15, 16 months?" Schaaf said. "The more walls that are going up, and the man-made condensing of the water, the channelization, I’m not saying it’s not climate change, but I think this is the biggest reason why we’re seeing it here.

"I think it was an unforeseen thing that they knew might happen," added Schaaf. "But I don’t think they realized to the extent of what it is."

Scientists and the engineers who monitor the flow of the Mississippi are asking similar questions, as 100- and 500-year floods become more frequent along the Mississippi.

They’re beginning to examine whether flood walls, levees and the other structures added to the river since the historic floods of 1993 have caused more flooding and misery, especially as development has migrated to once-vulnerable floodplains now protected behind levees. And the question overtopping all: Will increased precipitation, a consequence of climate change already being seen in much of the United States, exacerbate spring flooding?

"The scientific consensus I think is pretty clear here," said David Stokes, executive director of the Great Rivers Habitat Alliance, which addresses issues affecting wetlands and promotes sensible use of floodplains in the confluence region of the Mississippi, Missouri and Illinois rivers.

"The increased flooding we’re seeing in many parts of the Midwest, it’s a man-made phenomenon," he said. "We’re building in the floodplain, we’re putting concrete and asphalt shopping centers where Mother Nature wanted to go, and we’re over-channelizing the rivers top to bottom at the same time."

Climate change is "exacerbating poor choices that we’ve made on development," he added.

"If this pattern continues, we’re in for some expensive repeats going into the century," he said. "How do we make it so that the way that we mitigate, we can still have the economic possibility and prospects that the Mississippi River provides? How do we learn to live with the river, not make the river live with us?"

Wet storms that swept through a wide swath of the South and Midwest in recent weeks killed more than 20 people and flooded out towns perched on the banks of this mighty channel. The storm forced the closure of hundreds of roads in and around Missouri last week, including parts of both interstates 44 and 55 in and around St. Louis. Floodwaters hit near-record levels along the Meramec River, and in St. Louis, the Mississippi lapped up the steps leading to the base of the city’s iconic arch. Farther south, farms and small towns in Illinois and Arkansas have been overrun with floodwaters.

It’s supposed to rain in the spring, and flooding has long been a part of life along the Mississippi. But in recent years, the frequency of major flooding events has been on the rise — and sometimes at unexpected times of year. Catastrophic flooding, often driven by unexpectedly heavy rain events, has swept through many states, and many of those big rain events caught people by surprise in places like Houston and Baton Rouge, La.

Already, there’s evidence that extreme rainfall events are on the rise and are expected to worsen in the coming years. The 2014 National Climate Assessment predicted that many U.S. communities will see extreme precipitation events more often as global temperatures rise. More water vapor in the atmosphere caused by higher global and sea temperatures means the intensity of extreme precipitation events is on the rise.

Researchers have been trying for some time to determine how much of a connection exists between climate change and extreme events like downpours.

Kevin Trenberth, an atmospheric scientist at the National Center for Atmospheric Research in Colorado, gets asked the question so often about the connection between big rain events and climate change that he had this response via email: "Here we go again."

Trenberth described the recent weather throughout the Midwest as a "typical springtime situation bolstered by climate change." Sea surface temperatures are higher because of climate change, he said, adding about 5 to 10 percent to precipitation levels. He attributes another 10 percent of extra moisture to weak El Niño conditions in the Pacific.

Although spring rains and swollen rivers are inevitable along the Mississippi River and its tributaries, the flooding problems are almost entirely man-made, argues Bob Criss, a professor of geology at Washington University in St. Louis.

Criss published research in 2015 suggesting that the Army Corps of Engineers is underestimating flood levels in the Midwest by failing to fully incorporate changes like new levees, expanding development and heavier downpours. In St. Louis, for example, Criss’ research shows that the government is underestimating the reach of a 100-year storm by 5 ½ feet (Climatewire), July 9, 2015).

Human-caused climate change has little to do with the human-caused flooding problems, Criss argued last week.

"Believe me, I am concerned about what humans are doing," he said. "That is not our hugest problem, and that does not explain this. This river constriction is the No. 1 cause. Heavier precipitation in four days, of course that’s going to make these events more frequent. But the main flooding problem is that we don’t get along properly with our rivers."

An article in the St. Louis Post-Dispatch in the wake of the flooding found that about 40 percent of levees along the Mississippi River north of St. Louis are higher than their authorized heights. The reporting, which was based on findings of the Army Corps of Engineers, suggests that areas unprotected by levees might be bearing the brunt of the redirected waters.

Even if exacerbated by climate change, spring floods wouldn’t be as serious of a problem if local governments hadn’t allowed development in vulnerable floodplains, Criss said.

"Flood damage, human beings are absolutely responsible," Criss said. "It does not take a rocket scientist to look at a map and see where floodplains are. We know where these low-lying areas are. And yet we seem to insist on building levees and thinking that developing in these low-lying areas is OK. And it’s not OK."

Noah Diffenbaugh, a professor of earth system science at Stanford University, was the lead author of a study in Proceedings of the National Academy of Sciences released last week detailing a four-step framework for testing whether global warming contributes to record-setting weather events.

Climate change means communities must re-evaluate hazards, exposure and risk, said Diffenbaugh. All of them contribute, he said, and an exclusive focus on any one dimension, whether it’s levees that are too high or the effects of global warming, "doesn’t give people accurate answers."

"It’s clear just from the disaster losses in the U.S. on an annual basis that we’re not adapted to the climate we have now," he said. "Americans will be more safe and more secure if the management of those risks also acknowledges that the climate is changing. We have a lot of opportunity to catch up with the climate change that’s already happening, and prepare for the climate of the future."

Wall can stop 55 feet of water

In Cape Girardeau, which sits behind a flood wall that runs more than a mile along the river, Mayor Harry Rediger sees the barrier as a requirement for living along a mighty waterway — even as he acknowledges that it’d be near-impossible to get the funding for such a project today.

Finished in 1964, the wall is designed to withstand floods up to 55 feet. So far, the highest floodwaters seen in Cape Girardeau came last year, when waters crested after a December storm at 48.86 feet. The most recent floodwaters, expected to go down in the history books as the sixth highest in a city that dates to 1793, crested at 45.99 feet.

"There not an expense project, they’re an investment," Rediger said of the flood wall, while giving a reporter a tour of the city and its flood-defense infrastructure. "They’re an investment because they mitigate future damage, and just have paid for themselves so many times.

Schaaf and his family live on the edge of the city’s Red Star neighborhood north of the flood wall. His family lives on a hill, but the sloped, lower part of their backyard is vulnerable to flooding. They had to fight to get into a lower flood-insurance premium category by proving that their home was at higher elevation than the flood-prone lower yard, said Schaaf.

Over time, the city has bought out many of the lower-lying homes, and would like to buy out more in the neighborhood, Rediger said. The buyouts have given the city a floodplain that can hold excess floodwaters. Eventually, he envisions an RV park adjacent to the casino, one that could be easily evacuated when waters rise.

"The buyouts in that area have saved a lot of grief for a lot of people and a lot of damage," he said.

Many of those who live in the neighborhood are renters who say they’ve seen enough. Rhonda Weaks, 53, was out sweeping her front walk after her son, Wesley Myers, 18, mowed the grass Sunday afternoon.

River waters crept up almost to the top of that same walk in early 2016, the last time they had such severe flooding, Weaks said. It was shortly after they moved in. Now, they’re considering moving back to South Dakota.

"I’m tired of the river coming and visiting," Weaks said.