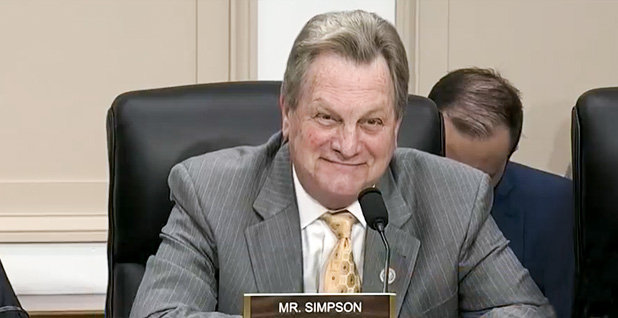 Rep. Mike Simpson (R-Idaho), chairman of the Energy and Water Development Appropriations Subcommittee, would have liked to see the House move forward with more spending bills this week. C-SPAN

House Republican leaders are anticipating hundreds of amendments to a package of four security-related spending bills due on the floor this week that will include funding for the Energy Department and Army Corps of Engineers water projects.

"We assume that there will be hundreds of amendments," said Majority Leader Kevin McCarthy (R-Calif.) on the House floor Thursday afternoon when outlining his expectations for the "minibus" package that will contain the fiscal 2018 defense, military construction-veterans affairs, energy-water development and legislative affairs bills.

Additionally, the bill is expected to provide $1.6 billion to pay for a wall along the U.S.-Mexico border, a top priority for the White House that could generate strong Democratic opposition.

Rep. Mike Simpson (R-Idaho), chairman of the House Energy and Water Development Appropriations Subcommittee, said he expected both funding and policy amendments to his $37.6 billion portion bill, which is $203 million less than fiscal 2017 enacted levels but $3.2 billion more than requested by President Trump.

Simpson said any changes in funding are unlikely to fly given the bill meets tight spending caps backed by GOP leaders. He said the bill’s national security and corps accounts were increased, and he doubts lawmakers would cut those programs to reverse reductions in areas like DOE science research.

Additionally, Simpson predicted amendments, similar to those offered in committee by Democrats, that would try to strip out environmental riders. He said the minority may target a provision to exempt the Trump administration’s repeal of the Clean Water Rule, also known as the Waters of the U.S., or WOTUS, rule, from the Administrative Procedure Act and allow firearms on Army Corps property.

Simpson and other appropriators blasted GOP leaders for moving only a four-bill minibus rather than a broad package with all 12 annual measures, including those that fund U.S. EPA and the Interior and Commerce departments.

Appropriators processed all the bills, but chamber leaders worried they might not have enough support to move the package if it contained large domestic bills, too.

"We did what they asked us to do, and then they did not give us a chance. That’s frustrating for us," said Simpson.

Rep. Ken Calvert (R-Calif.), chairman of the Interior and Environment Appropriations Subcommittee, said he too is "disappointed and frustrated" his panel’s bill did not make the package. Calvert said he had "no idea" when or if it would come to the floor before the new fiscal year begins on Oct. 1.

Appropriators believe the most likely outcome is for all 12 bills to be cobbled together late in the year into an omnibus package assembled by House and Senate leaders. They said if the House had passed all 12 bills this month it would have had a stronger hand in negotiations with the Senate.

The upper chamber has yet to approve any bills and is moving at a slower pace, but the Senate Appropriations Committee is set to advance two more spending bills this week.

Rep. Hal Rogers (R-Ky.), the chairman of the State and Foreign Operations Appropriations Subcommittee, said leaders were "premature" in backing off a 12-bill omnibus that he believes could have passed the House.

Rogers said having the domestic bills paired with the more popular national security bills would have allowed the often-contentious measures to win support across the GOP conference.

Meanwhile, House Republican leaders have not said when they will take up the chamber’s fiscal 2018 budget resolution that passed committee last month. It matches the funding levels in the spending bills but also would make it easier to move tax reform legislation and make about $200 billion in mandatory cuts.

House Budget Vice Chairman Todd Rokita (R-Ind.) said he believes the budget could advance if it’s sold as a "gateway to tax reform." He said the spending plan could move in September if it does pass before the House departs for its summer recess at the end of this week.

GOP leaders so far have not appeared to bridge a split between moderates, who oppose many of the mandatory cuts, and conservatives, who want even deeper reductions and are not fully on board with the tax plan.

The House Rules Committee will meet later this evening and again tomorrow to decide which amendments will move forward to the floor for the natural-security-focused minibus.

The Senate Appropriations Committee has set votes on measures to fund the Transportation, Commerce and Justice departments, as well as science programs. They will release those bills tomorrow, and the full committee plans to advance them Thursday.

Senators will likely show an even greater split on transportation spending from the Trump administration than their House counterparts, who have already rejected many of the deep cuts.

The House Commerce, Justice and Science Appropriations Subcommittee spending bill includes cuts for climate research programs. Also, there is a provision that would bar the Justice Department from entering into settlement agreements that require donations to third parties.

Schedule: The Senate Appropriations Committee markup is Thursday, July 27, at 10:30 a.m. in 106 Dirksen.