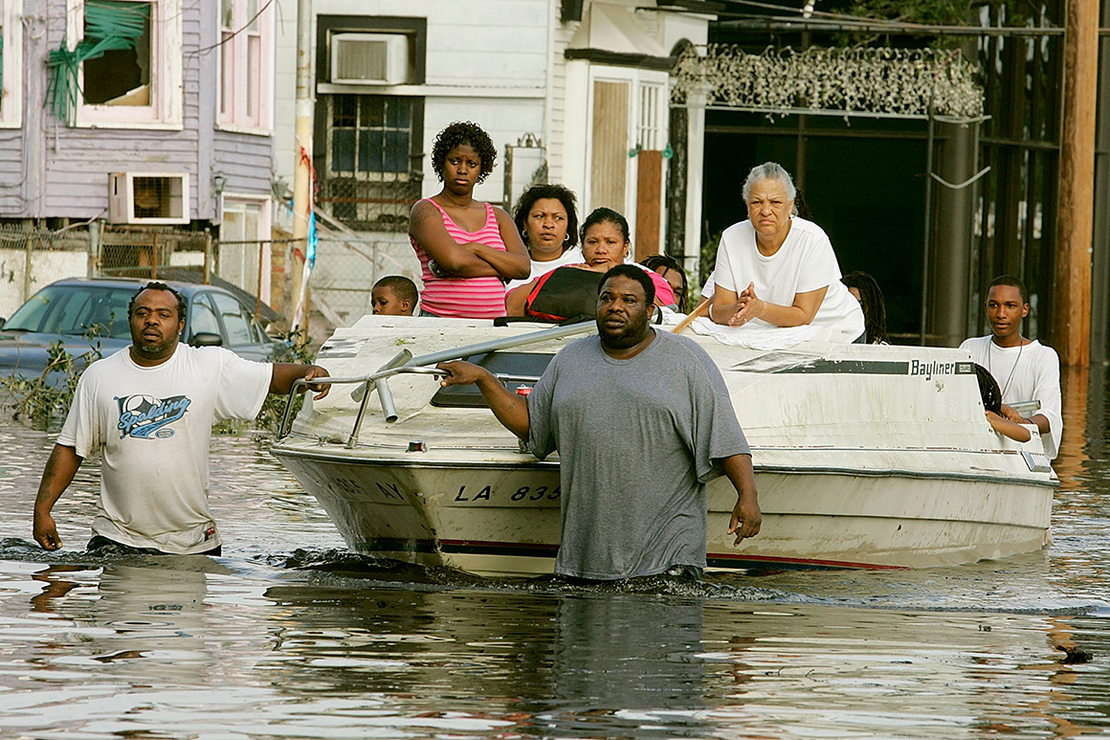 People on Canal Street are pictured using a boat to get to higher ground as water began to fill the streets of New Orleans in the aftermath of Hurricane Katrina in August 2005. Mark Wilson/Getty Images

When the Federal Emergency Management Agency overhauled its flood insurance program last year, it wanted to encourage homeowners to buy coverage by showing them more precisely the risk that each property faces of being flooded.

But instead, hundreds of thousands of people have dropped the flood policies they were buying through FEMA, raising concerns that an unprecedented number of households are financially exposed to flood damage.

Records reviewed by E&E News show that more than 425,000 people have discontinued the coverage they had through FEMA’s National Flood Insurance Program since October, when FEMA began to raise rates on millions of properties to reflect flood risk more accurately. FEMA also lowered premiums on hundreds of thousands of properties where rates were too high.

The NFIP provides most of the nation’s flood insurance and has been trying for years to increase the number of households with flood coverage as climate change and development intensify flood damage. Flood insurance is sold separately from homeowners’ insurance policies.

But FEMA’s own records and interviews with insurance agents indicate that so far, the restructuring is having the opposite effect, prompting some people to let their policies expire when faced with higher insurance premiums.

“It’s going to backfire in their face,” said Tammy Whitehead, an insurance agent in New Orleans who is critical of FEMA’s restructuring.

It is unclear how many people who dropped NFIP policies have bought flood coverage through a private insurer.

Tuna Siraci, president of insurance brokerage National Flood Insurance LLC, said insurance companies are taking advantage of the rising NFIP rates and are starting to offer flood coverage, which insurers had avoided for decades because the losses are catastrophic and unpredictable.

FEMA told E&E News that “there are many factors that could influence this drop in policyholders, including the economic impact of the pandemic, inflation, the housing market, affordability or purchasing flood insurance from the private market.”

“We remain confident that policies will increase, over time, under our new Risk Rating methodology,” FEMA spokesperson Jeremy Edwards said, referring to the agency’s restructuring program, known as Risk Rating 2.0.

An internal FEMA report in December projected that the number of NFIP policies would drop to 4.04 million by 2030, though the agency said the projection represented a “pessimistic financial model” (Climatewire, July 25).

The declining number of NFIP policyholders raises fears that more people whose homes are flooded will not be able to rebuild or recover financially, and that low-income households will suffer. Only about 4 percent of the nation’s households have flood coverage.

“Unfortunately, those who need insurance the most are the least able to afford it,” said Carolyn Kousky, a flood insurance expert and associate vice president for economics and policy at the Environmental Defense Fund.

Kousky said the drop in insurance coverage shows the need for Congress to create a subsidy program that helps low- and moderate-income households buy flood insurance. A flood policy through the NFIP costs about $1,000 a year.

“There is a lot we could be doing to improve communication of flood risk. Simply telling people they are in the SFHA is insufficient,” Kousky said, referring to the special flood hazard area, which FEMA delineates on flood maps to show properties at the greatest risk of being flooded.

Sen. Bob Menendez (D-N.J.) said in a statement to E&E News that with storms intensifying, “more uninsured homes is a recipe for financial disaster for working- and middle-class families across the country.”

“We need to focus more on having affordable premiums,” said Menendez, who has been critical of FEMA’s insurance restructuring.

Most of the people dropping NFIP policies are those who are not required to have flood coverage and who faced higher premiums when their policies came up for renewal in recent months, said Whitehead, the insurance agent.

Federal law requires people to have flood insurance on properties that are in a high-risk flood zone and are secured by a federally backed mortgage.

But a large number of people with NFIP coverage face no requirement because they live in a lower-risk area or do not have a federally backed mortgage.

Whitehead said those people who buy flood coverage voluntarily are dropping their policies.

Siraci, the brokerage president, estimated that 90 percent of the people dropping NFIP coverage were not required to have flood insurance.

“Even before, when policies were $500 … it was very difficult to have homeowners buy voluntary flood insurance policies,” Siraci said. “Obviously when the premium goes up three times, that is a great reason for them not to continue with the policy.”

FEMA records show a sharp drop in the number of so-called preferred risk policies that cover properties located in areas with a moderate flood risk.

An E&E News analysis of FEMA records also shows the largest percentage decrease in NFIP policies occurred in inland states, where relatively few insurance claims have been filed since the program was created in 1968.

The states with the biggest drop in policies are Minnesota, Arizona, Wyoming, North Dakota, Nebraska and South Dakota.

The states with the smallest drop in policies include high-income coastal states such as New York, New Jersey, Maryland and Hawaii.

Sen. John Kennedy (R-La.), a vocal critic of FEMA’s insurance restructuring, said in a statement that the new program “is already costing Louisianans their flood coverage” and is “robbing Louisiana families of the flood protection they need for their homes.”

Louisiana, which has sustained some of the costliest flood damage in the nation, saw an 8.5 percent decrease in the number of NFIP policies since October.

“The reality is that it is the responsible thing to carry flood insurance in many areas of our country, but especially in Louisiana,” Rep. Troy Carter (D-La.) said in a statement.

“However, the skyrocketing prices of flood insurance coverage under Risk Rating 2.0 is pricing people out of doing the right thing,” Carter added. “Especially with the climate crisis exacerbating extreme weather across the country this isn’t just poor policy — it’s downright dangerous.”