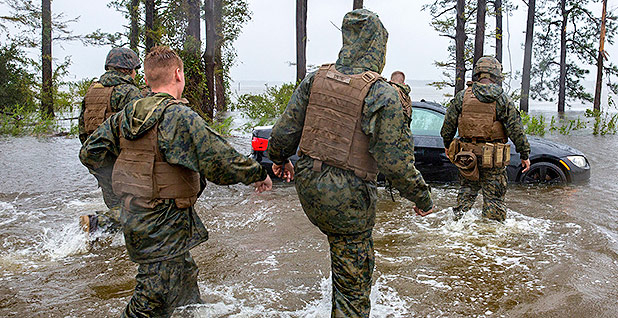 House Democrats are hoping that the destruction Hurricane Florence brought to the Southeast coast over the past few days could jump-start efforts to reform federal disaster law and spur fresh interest in the continuing hurricane recovery in Puerto Rico and the U.S. Virgin Islands.

Large swaths of North Carolina are underwater, and 17 people had died as of last night.

At the top of the reform list would likely be the Robert T. Stafford Disaster Relief and Emergency Assistance Act, which governs federal disaster declarations, to allow houses and the power grid to be rebuilt to be more resilient after disasters.

"We need a provision that allows enhancement of the grid, not just fixing it back to where it was," Rep. Sheila Jackson Lee (D-Texas) said at a news conference Friday. "Right now in the Southeast region, I think we all know, there are thousands of people without power pursuant to Hurricane Florence."

It’s an idea that’s popular with lawmakers from both parties and one that was discussed at length after last year’s storms. It was also among the recommendations the Texas General Land Office laid out in its post-Hurricane Harvey report (Greenwire, Aug. 27).

Current law says damaged infrastructure must be rebuilt to pre-disaster standards, a requirement that has historically hamstrung efforts to invest in stronger infrastructure.

One measure to reform the Stafford Act to allow more resilient building, H.R. 4460, was attached to the House-passed Federal Aviation Administration reauthorization bill.

Lawmakers from both chambers are currently in talks to produce a final version of that bill, and although the White House has opposed the Stafford Act reforms, Senate Commerce, Science and Transportation Chairman John Thune (R-S.D.) suggested last week that Florence could ensure the disaster provisions remain in the bill.

"It certainly puts more pressure on it," Thune said.

But failing that, Jackson Lee suggested that some sort of Stafford Act reform could find a home in a potential supplemental disaster funding bill for states affected by Florence.

"Every year, we keep talking about, ‘Can we overcome that provision to just go in and make it the way it was?’" she said.

House Democrats are also pushing a handful of measures aimed at Puerto Rico, which is still reeling from the damage brought down by Hurricane Maria last year.

That includes two bills from Rep. Nydia Velázquez (D-N.Y.), a Puerto Rican native. One would create a 9/11-style commission to investigate the federal government’s response to Maria, while the other would require a probe into how the Federal Emergency Management Agency counts victims of disasters.

Those measures have struggled to gain traction among Republicans in Congress, but Velázquez said President Trump’s recent tweets about the Puerto Rican death toll underscore their importance.

The president last week downplayed a study that found nearly 3,000 died as a result of Maria, saying that it was "done by the Democrats in order to make me look as bad as possible when I was successfully raising Billions of Dollars to help rebuild Puerto Rico."

"We pray the administration has learned from their mistakes and the response in the Carolinas will be better," Velázquez said. "But President Trump’s tweets do not inspire confidence."

Meanwhile, states affected by Florence will likely get more clarity this week on the outlook for a supplemental package.

Sen. Thom Tillis (R-N.C.) on "Fox News Sunday" said the damage would likely be "in the billions" of dollars.

"This storm is likely going to produce impacts greater than Hurricane Matthew. The floods that come midweek are likely to be as damaging or more damaging than the original event," said Tillis.

"The agriculture industry, the largest industry in our state, is hard hit," he said. "We’re going to have to sort out the crop damage."

Lawmakers on both sides of the aisle have said there will probably be some kind of supplemental measure, though they’ll have to wait to determine the scope of the damage.

But lawmakers have also downplayed the immediate need, suggesting that FEMA has enough in its coffers to hold on through at least the end of the fiscal year.

Sen. Richard Burr (R-N.C.) welcomed the president’s disaster declaration for North Carolina over the weekend. He tweeted that "federal aid can get to the people who need it most faster."

FEMA and its parent agency, the Department of Homeland Security, could be covered by a stopgap measure until December, with lawmakers preferring to hold off on fights over Trump’s border wall until after the midterm elections.

A GOP aide last week said the stopgap measure lawmakers are looking to pass before the Sept. 30 deadline is not expected to include any disaster aid (E&E Daily, Sept. 14).