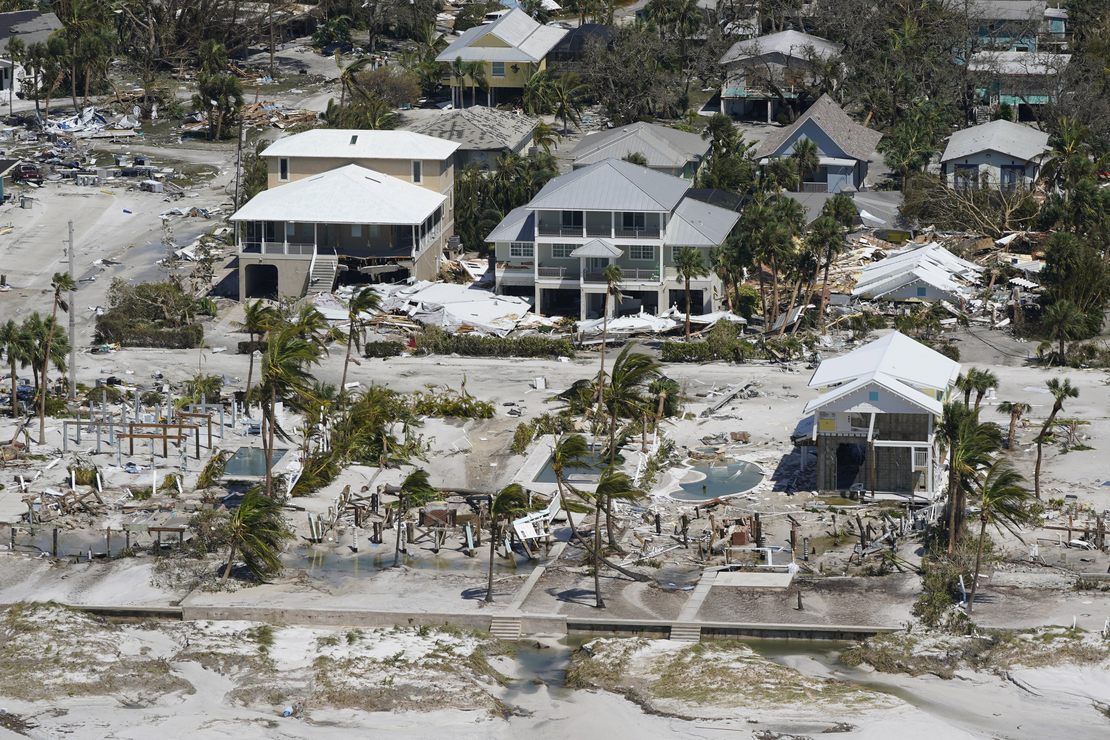 Damaged and missing homes are seen in the wake of Hurricane Ian on Thursday in Fort Myers Beach, Fla. AP Photo/Wilfredo Lee

Millions of Floridians remained without power, food and water on Friday as emergency crews stepped up their efforts to rescue people still trapped by Hurricane Ian.

As the unofficial death toll hit 21, state officials said 10,000 Floridians had yet to be accounted for.

Florida Gov. Ron DeSantis said emergency workers had gone door-to-door to more than 3,000 homes in the hardest-hit areas in search of survivors.

“There are over a thousand dedicated rescue personnel who are going up and down the coastline,” DeSantis, a Republican, said at a morning news conference at the Florida Emergency Operations Center in Tallahassee.

At least 700 Floridians had been rescued, mostly by air.

As Ian prepared to make landfall in South Carolina on Friday, Florida officials said the Category 4 hurricane that slammed their state with 150-mph winds on Wednesday could rank as the biggest natural disaster to ever hit the state.

The governor said that officials had contacted 20,000 Floridians who filled out a “shelter-in-place” survey, indicating that they planned to remain in their homes to ride out the storm, but that they had heard back from only 10,000 of those residents.

With cellphone connectivity “sparse in some areas,” DeSantis urged people to use a new website — missing.fl.gov — to connect with family members and help search-and-rescue teams find any missing Floridians.

Thousands of Floridians are also lacking access to food and water. DeSantis said emergency workers had set up food and water distribution centers in Lee and Charlotte counties, using the training facilities of the Tampa Bay Rays and the Minnesota Twins.

The governor said the state had evacuated six health care facilities in southwest Florida that “were having problems with water or problems with power for an extended period of time.”

As workers dug through the debris, city officials in Fort Myers Beach said that 90 percent of the homes had been destroyed. Emergency crews planned to use barges to reach hundreds of people trapped on Sanibel Island after a causeway that served as the only access to the Florida mainland collapsed.

The governor said Fort Myers Beach was “ground zero and obviously very important” but that Ian had also caused widespread destruction farther inland, noting that 99 percent of the residents in Hardee County in central Florida were still without electricity.

Across the state, 1.9 million customers had yet to have their power restored, DeSantis said.

The White House said President Joe Biden talked to DeSantis on Friday and “has directed his entire Administration to prioritize lifesaving actions and ensure delivery of essential services and support to survivors.”

Biden also approved four additional counties in the state for “Individual Assistance and Debris Removal” as part of a major disaster declaration for Florida, and the White House said more counties may be added in the coming days.

The White House said Biden has also approved a pre-landfall emergency declaration for South Carolina. After weakening when it left Florida, Ian strengthened again and is expected to strike South Carolina later Friday as a Category 1 hurricane.

While the storm dumped more than a foot of rain in parts of central Florida, a study released Thursday found that climate change added at least 10 percent more rain to Hurricane Ian.

The study compared storm rainfall in forecast simulations with and without human-induced climate change.

“In short, the hurricane was wetter than it would have been in a world without climate change,” said Kevin Reed, one of the researchers involved in the study and an associate professor at Stony Brook University.

In an email, Reed called it “another reminder that climate change is here and impacting our weather events, including hurricanes.”