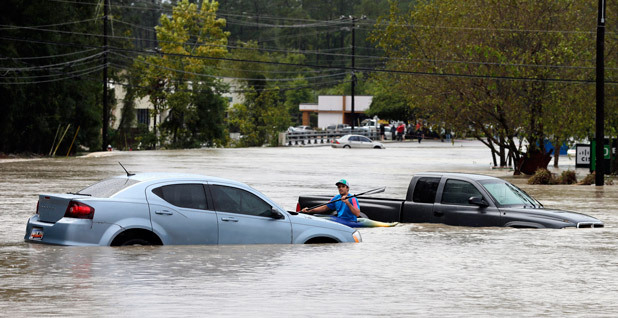 A kayaker maneuvered between two cars floating down a street in Columbia, S.C., yesterday as record rains forced hundreds of water rescues and cut out electric power for thousands. Photo by Chuck Burton, courtesy of AP Images.

Heavy rains and chest-deep floodwaters inundated much of the Atlantic Seaboard yesterday, swamping coastal Georgia and parts of New Jersey and setting historic records in the Carolinas, which received the worst flooding.

By 2 a.m. today, Hurricane Joaquin, the force behind the destructive storm surge and rainfall, was about 100 miles northwest of Bermuda, moving at 13 mph. Its winds had slowed to 85 mph, down from speeds well above 100 mph.

The National Weather Service had also downgraded Bermuda from a hurricane warning to a tropical storm warning. The storm will be in the central Atlantic by Wednesday evening, the service forecast.

Still, NWS expects the "large and destructive waves" will join a storm surge and hit Bermuda. And ocean swells from Joaquin’s wake will continue to hit the Bahamas, at least through the day, and trouble the East Coast up to Canada’s Atlantic shores. The two island nations appear to have sustained the worst property damage.

"These swells are likely to cause life-threatening surf," a weather service advisory published this morning said. "A prolonged period of elevated water levels and large waves will affect the mid-Atlantic region, causing significant beach and dune erosion with moderate coastal flooding likely."

By late yesterday, authorities had reported five weather-related deaths, and at least 30,000 people were without power in South Carolina. President Obama, through the Federal Emergency Management Agency, approved federal disaster relief Saturday for South Carolina after signing an emergency declaration for the state.

"We haven’t seen this level of rain in the low country in a thousand years," South Carolina Gov. Nikki Haley (R) said at a press conference. "That’s how big this is."

Parts of the state received a foot and a half of rain in approximately 24 hours.

"The storm’s winds are generating ocean swells capable of causing coastal erosion along the Outer Banks, Virginia and Maryland, as well as areas of the New England, most likely to see the effects," said Nathaniel Plant, a U.S. Geological Survey oceanographer, in a statement. "Isolated locations along the New Jersey and New York coast, areas that were hit hard by Hurricane Sandy, could also experience dune erosion."

The Coast Guard urged boatmen in southern Massachusetts and Rhode Island to tie down vessels. The Coast Guard said yesterday that search-and-rescue crews in helicopters, planes and cutters continued to search a 70,000-nautical-square-mile portion of the Caribbean Sea for a missing cargo ship — El Faro — that had been listing after Hurricane Joaquin pummeled the Bahamas and the ship last week. Officials said crews spotted an oil slick and debris but couldn’t confirm the materials’ origin.

Members of the crew, 33 in total, said Thursday the ship had taken on water but flooding was contained, according to the Coast Guard. Guardsman rescued all 12 crew members of another vessel caught in Joaquin’s path, the sinking 212-foot Minouche, Friday near Haiti, where a fisherman died due to the storm.

Joaquin pummeled the Bahamas with 130 mph winds this weekend. The Caribbean Disaster Emergency Management Agency said about 70 percent of Crooked Island, in the archipelago nation’s southeast, is flooded with water 5 feet deep. Crooked Island and others lost functional airports, bridges, power lines and access to docks.

In the United States, Maryland, New Jersey, North Carolina, South Carolina and Virginia declared states of emergency last week, and New York, Pennsylvania and other states stood ready to deal with the hurricane. South Carolina was most heavily hit with a "firehose" of moisture from the Atlantic Ocean bringing rainfall at 3 inches per hour at times, resulting in flash flooding. Some of the moisture came from Hurricane Joaquin, whose eye passed to the west of Bermuda last evening, with 100 mph winds.

Some parts of South Carolina got more than 20 inches of rainfall by yesterday evening. Previous notable flooding events caused by heavy rainfall were seen in 1999, 1990, 1908 and 1903, according to South Carolina Department of Natural Resources.

Swells associated with Joaquin elevated water levels and triggered large waves along the Mid-Atlantic region, and increased the likelihood of coastal flooding. The warnings were a reminder that inland flooding and storm surges have been the most deadly phenomenon associated with hurricanes in the last 30 years, according to the National Weather Service.

Joaquin, a slow-moving mass of water and wind, was a spaghetti monster of a storm.

As the Category 4 storm veered out to sea northeast of Bermuda yesterday, the nation’s weather forecasters struggled to get an early bead on its track. Some models Thursday showed the storm potentially making landfall on the U.S. East Coast, raising concerns of significant damage.

Other models showed the hurricane veering off into the sea. The divergence indicates just how difficult it remains to forecast a hurricane’s track more than 72 hours into the future.

For Joaquin, all the models Thursday showed divergent storm tracks, and only the European model, ECMWF, showed the storm moving away from the coastline.

Hurricanes are largely steered by winds, and Joaquin, in its early days, was in an area where the winds were extremely unpredictable, said Timothy Marchok, a research meteorologist at NOAA who works on the HWRF model. It was surrounded by multiple developing weather systems, any of which could steer Joaquin one way or the other.

"It was a very, very delicate forecast situation," he said.

ECMWF got the forecast right in this case, and scientists will likely dissect the storm over the coming months to figure out why. Hurricane forecasters work by modeling the physics of atmosphere and ocean processes, and then ingesting massive amounts of observations such as satellite data, information from commercial aircraft, reconnaissance and sea surface measurements into their models. The models then assimilate the data to create an initial analysis of the atmosphere.

That data assimilation step, where models massage the data to make sense of it and create an organized three-dimensional picture of the atmosphere, is critical, Marchok said. The various models have different data assimilation processes. The end result is that models do a better job modeling storms in certain ocean basins than they do in others.

This is why hurricane forecasters do not rely on any one model but rather use an ensemble of models to issue warnings. In the case of Joaquin, the National Hurricane Center recognized that the models were not in agreement and said it had low confidence in its forecast that the hurricane would make landfall. By Friday, most models in the ensemble matched ECMWF and indicated that Joaquin would veer off into the sea.

A trend of rising storm damage

Joaquin followed a separate low-pressure system that moved through the southeastern United States the past weekend, saturating the soil and prompting the National Weather Service to issue an advisory of "potentially historic and life-threatening" flooding due to heavy rainfall.

After Superstorm Sandy, the second-most expensive hurricane in U.S. history behind Katrina, Congress funded NOAA through the Disaster Relief Appropriations Act of 2013 to develop more detailed elevation models of the coastline along New Jersey and New York. These models would show at a 3-meter resolution how storm surges could inundate land, said Barry Eakins, a marine geophysicist at NOAA’s National Centers for Environmental Information.

The models could get integrated into hurricane forecasting models to show storm surges in real time.

Congress has not funded NOAA to continue digital elevation mapping beyond the tri-state area, leaving those places potentially vulnerable. Higher-resolution models can pinpoint vulnerable neighborhoods with greater accuracy and make it more likely that people will heed storm warnings and evacuate, Eakins said.

Joaquin’s emergence led some to posit that the record-high sea surface temperatures this year, linked to climate change, may have played a role in its development. There is some indication that the intensities of Atlantic hurricanes have been increasing since the 1980s.

Climate scientists remain unsure, however, that climate change is presently affecting hurricanes. There is simply not enough data available to separate the contribution of natural variability in the occurrence of such storms, said Thomas Knutson, a research meteorologist with NOAA’s Geophysical Fluid Dynamics Laboratory.

But verifying how much climate change contributes to hurricanes remains difficult.

"If you actually go out and look for it [the contribution] in the data, you can’t yet see it because there are so many other things going on," Knutson said, "like natural variability, or maybe you just don’t have a long enough record of intensities to judge. So it’s a limitation of your data."

Extreme weather instances appear more common than they were a generation ago.

The number of extreme weather events, like uncharacteristically hot or cold snaps, hurricanes and building-razing freshets, grew fourfold between 1980 and 2014, from 38 to 174, according to analysis by the World Energy Council.

Uninsured losses from natural and man-made catastrophes have averaged more than $130 billion annually in recent years, a "significant increase" compared to trends of the last 30 years, the council said.