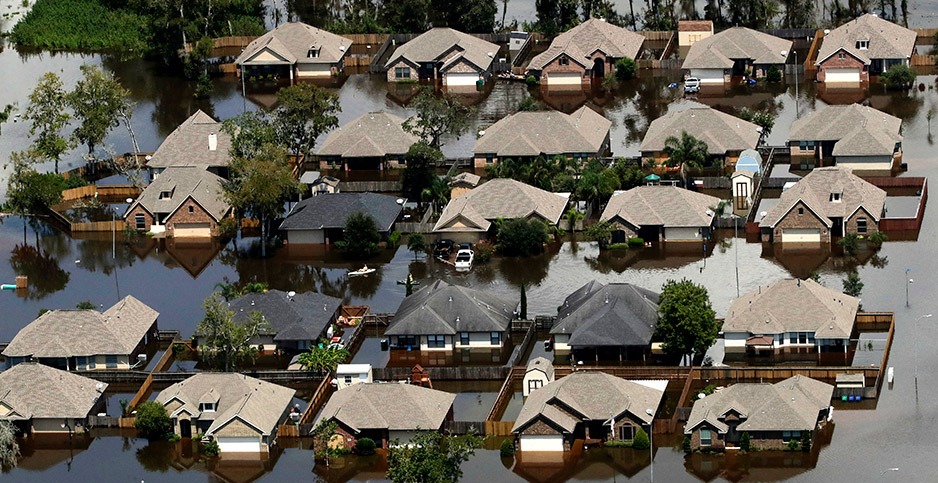 Homes surrounded by water from the flooded Brazos River in the aftermath of Hurricane Harvey in Freeport, Texas, in 2017. Charlie Riedel/Associated Press

Stronger hurricanes with heavier rainfall are often cited as an element of global warming. Now research out yesterday suggests that climate change might be changing the behavior of these storms in an unexpected way.

The paper in Nature, authored by James Kossin of NOAA, says tropical cyclones have experienced a substantial slowdown in the speed at which they move across the globe. On average, they’ve slowed by about 10 percent between 1949 and 2016.

Most of the slowing has occurred in the speed at which hurricanes move over the ocean, Kossin noted. But in some locations, there’s been a slowdown over land, as well — mainly in the North Pacific, the North Atlantic and some parts of Australia.

It’s a finding that should give policymakers pause, Kossin says. The more slowly a hurricane moves, the more wind and rain it can inflict on any given location, meaning it has the potential to cause more damage. Hurricane Harvey is a prime example. Because of its unusual stalling behavior, it dumped huge amounts of rain on the Texas coast and spurred catastrophic flooding last August.

Slower storms may carry all kinds of other risks, too, Kossin said — not just more rainfall, but also a greater risk of storm surge and a longer amount of time that buildings and other structures have to withstand strong winds.

"All of the hazards that go along with tropical cyclones would be amplified by this slowing," he told E&E News.

Kossin made the discovery using hurricane track data from the last seven decades. He’s careful to note that the findings don’t definitively indicate a link to climate change — they just demonstrate that a slowdown has occurred. Still, he points to other research suggesting that climate change may be weakening certain atmospheric circulation patterns that help drive the movement of cyclones.

It’s reasonable to assume that these circulation changes "should manifest in tropical cyclone translation speed," he said.

Some modeling research has indicated that future warming could have such an effect, he added. Just a few weeks ago, a study in the Journal of Climate produced simulations of hurricanes under a severe warming scenario. On average, the simulated hurricanes had higher winds and more rain, and they moved more slowly.

"When multiple lines of evidence lead you to the same conclusion, it strengthens your reasoning a little bit, or your understanding of the problem a little bit," said Ethan Gutmann of the National Center for Atmospheric Research, the lead author of that study.

But he added that his findings were not quite as dramatic as the observations in the new paper, nor were they uniform across all the simulated hurricanes. In his study, the strongest, most consistent change across the board was an increase in the amount of precipitation the storms produced.

Other researchers are more skeptical of the paper’s findings.

Kevin Trenberth, a climate scientist at the National Center for Atmospheric Research, said the research did not account for some important factors, such as the number of hurricanes occurring in each studied year or the month in which they occurred, which he says could affect the trends reported in the paper. He also said the changes in tropical circulation that scientists have observed in recent decades are mainly limited to circulation patterns that don’t greatly influence hurricane speed.

Additionally, he noted that other natural features of the climate system may also affect the speed of tropical cyclones, and that "it is far from clear that global climate change has anything to do with the changes being identified."

But Gutmann said it’s "certainly reasonable to propose a link" to climate change. He and Kossin both suggest that a true attribution study, involving modeling under various climate scenarios, is the next step to figuring out how much of the observed slowdown has been driven by human-caused climate change.

Hurricanes in a warming world

In the meantime, scientists continue to investigate other ways that climate change may affect the behavior of hurricanes. Last week, four of the world’s leading climate and extreme weather experts published a blog post on the topic. Years of research have generally concluded that climate change won’t necessarily cause hurricanes to occur more frequently, but will likely spur a greater number of unusually strong storms, they write.

Hurricanes generally have a physical limit on their potential wind speeds, influenced by aspects of the surrounding air and water. "In general, as the climate warms, this speed limit goes up, permitting stronger storms than were possible in the past," the scientists note.

Rising temperatures may also affect the amount of precipitation hurricanes can produce. Just last month, a study in the journal Earth’s Future suggested that Hurricane Harvey’s devastating rainfall may be linked to record-high ocean heat content going into the summer of 2017. Several other studies have also suggested that Hurricane Harvey was influenced by climate change.

While Harvey is just one extreme case, physics generally dictates that for every degree Celsius the atmosphere warms, the amount of moisture it can hold should increase by about 7 percent, notes climate scientist Christina Patricola of Lawrence Berkeley National Laboratory in a comment, also published yesterday in Nature. That said, she added, regional patterns in the amount of rainfall produced by tropical cyclones remain murky.

Still, Kossin notes, "we have every expectation, just based on the most fundamental physics of ‘warmer air holds more water vapor,’ that rain rates are increasing."

Other research indicates that hurricanes may be distributing differently around the globe than they used to. Kossin also co-authored a high-profile 2014 paper in Nature suggesting that tropical cyclones may be migrating farther toward the poles. That finding, like the slowdown documented in this week’s paper, may have implications for regions around the world that are at the greatest risk of hurricane damage.

Hurricane movements and migrations are at the top of Kossin’s research interests for now, he noted.

"They both serve to change patterns of risk and bring certain areas into more harm’s way than they would have been," Kossin said. "At the moment, I’m looking at those two things as being nice examples of measures we can look at that aren’t frequency or intensity — and in both cases, we’re finding these longer-term trends."