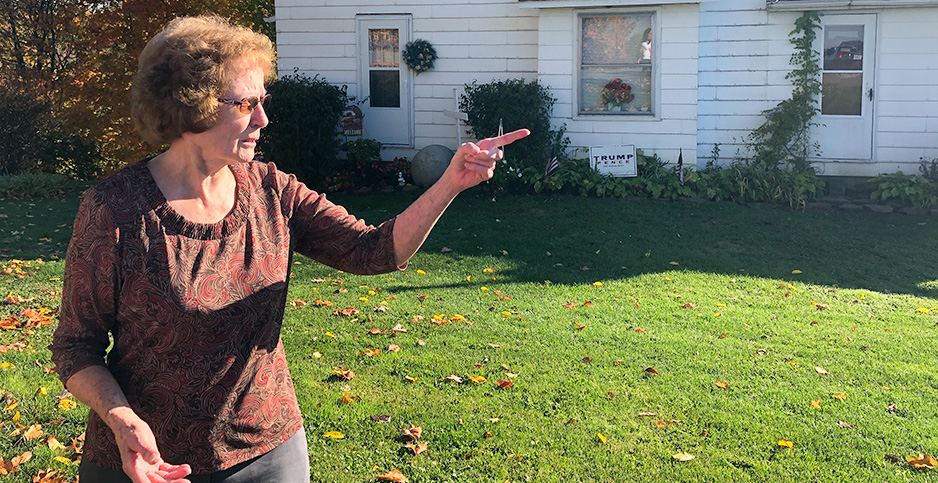 Rose Friend supports President Trump because of his stance on abortion, despite the problems she's faced from a nearby hydraulic fracturing pad. Adam Aton/E&E News

WASHINGTON COUNTY, Pa. — Rashes cover his son’s belly. The afflicted boy’s father, Bryan Latkanich, flips through more pictures that show the redness clawing up his son’s neck and below his waist.

The burns and welts started appearing in 2013 and lasted through last year. His child’s bathwater, he said, had been contaminated by the hydraulic fracturing pad less than 500 feet from his house. A toxicology report advised the family to "stay away from his exposure source (the house site — air and water) as much as is possible."

Latkanich used to be the oil and gas industry’s "biggest cheerleader." Now he feels like an army of one — fighting without state or federal help against the companies that have fracked his land.

But in this election, Latkanich says he’s voting for President Trump, who has lampooned Democrat Joe Biden, his opponent, for highlighting the risks of fracking.

Voters’ approval of fracking has fallen to about 50% in Pennsylvania, according to polls. There are enough conservatives opposed to fracking — around 19%, according to an August CBS poll — that it could represent a weak point in the Republican coalition.

But it probably won’t. This is where Trump’s attention to his base has paid off, according to interviews with dozens of Pennsylvania voters.

Guns, abortion and other issues in the culture wars, like protests over racial injustice, are keeping rural and exurban conservatives from defecting to the Democratic Party, even when they agree with Democrats’ criticism of industry.

"That’s one of the big things, I do not believe in killing babies," said Friend, who lives south of Pittsburgh in rural Washington County.

She wants new regulations to stop whatever’s causing her air to stink, but she’s not concerned about greenhouse gases. More troubling, she said, is what might replace fracking.

"I’ll buy a head of lettuce, and I’ll go through a gallon of water just to rinse it," the resident said. "I’d never really thought about it before."

Cabot, which is facing 15 criminal charges, has denied wrongdoing in the region and has said the area’s water has naturally occurring contaminants.

The industry needs more oversight, the resident said. But voting for Biden was out of the question, in part because of the more liberal presence of the vice presidential nominee, California Sen. Kamala Harris, on the Democratic ticket, and in part because of Biden’s perceived corruption — an issue the Trump campaign has hammered in the election’s closing days.

"Even Bill Clinton was kind of a normal politician. Now, it’s so freakin’ whacked out," the person said.

‘They call you names’

Brett Jennings, Republican chairman of the Hallstead Great Bend Joint Sewer Authority, near the Pennsylvania-New York border, said the fracking industry can claim that contaminated water is safe because the government’s standards are so lax.

Jennings said he’s been in physical fights with fracking workers who have tried to move him away from monitoring their sites. (He says he won.) And as an environmental professional, he said he worries about the long-term legacy of fracking. He doesn’t trust companies to properly clean up after ending operations.

"I listen to her words, see her deeds. She isn’t joking. She’s going to be on a collision course with the Constitution," Jennings said.

While Biden tells Pennsylvania voters that he won’t ban fracking, campaigns against the fossil fuel build-out are telling those same voters that they aren’t working for Biden.

"One of the things I’ll never do is come out swinging against Trump," Britton said, standing in a leafy subdivision where two-story curtain walls marked the pipeline’s path through spacious backyards.

If you lead with climate, she said, "they call you names. They call you a radical left-winger, a tree hugger, a libtard. But when you’re talking about safety, they can’t throw those at you."

"It frees you from being a partisan," she added. "After they’re hooked on the subject [of pipeline safety], then we’ll go in and do educational pieces … and we try to do it in little pieces."

"I’ve never been into local government stuff, but now … I’m becoming so involved, because I realized we’re the ones who have to make it stop, locally," she said.