‘I am mentally calculating my retirement date here’ — judge 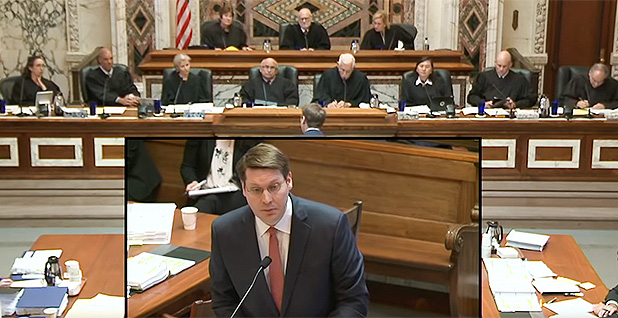 Christen was airing frustration about EPA’s decision to freeze certain agency proceedings on chlorpyrifos last summer — on top of environmentalists’ claims that it has already dragged its feet for years.

"Is there no limit to this?" the Obama appointee asked at another point. "Is that really your answer?"

The often-combative court session yesterday afternoon at the 9th U.S. Circuit Court of Appeals centered on EPA’s 2017 denial of environmental and civil rights groups’ petitions to ban chlorpyrifos, which is used on U.S. crops and has been linked to neurological problems in children.

Following a lawsuit from the League of United Latin American Citizens, environmentalists and farmworkers’ groups, a three-judge panel last year ordered EPA to ban the use of the farm chemical on food crops.

But the 9th Circuit in February agreed to reconsider the case before a bigger group of judges — a practice reserved for especially consequential cases.

The 11 judges grilled both sides, questioning Earthjustice lawyer Patti Goldman on whether the court even had jurisdiction over the dispute and cornering Brightbill on how long it would take EPA to issue a final decision.

Advocates first pushed for a ban on chlorpyrifos on food crops in 2007. They argue EPA is required under the Federal Food, Drug and Cosmetic Act to first determine that a chemical is safe before allowing its use on food.

The Obama administration proposed a rule blocking the pesticide but failed to finalize it before President Trump took office.

In 2017, then-Administrator Scott Pruitt denied the petition. But the agency never acted on subsequent objections filed by supporters of a ban.

Several judges grappled yesterday with whether EPA must finish processing those objections before the court has jurisdiction.

"Is it still your position that we get to merits even though there’s been no ruling on the objections?" asked Judge Richard Paez, a Clinton appointee.

"The only step that isn’t completed is a decision by EPA on those objections. … That’s outside our control," New York Deputy Solicitor General Andrea Oser — representing states that support a ban — told the court.

George W. Bush-appointed Judge Carlos Bea and others asked whether, given the question about EPA’s incomplete proceedings, the advocates should have sought the ban through what’s known as a writ of mandamus from the court, rather than a routine legal complaint.

Goldman responded that her clients were concerned that such an approach would end up actually bogging down the process, as the lawsuit was already set for streamlined review.

The court has the authority to effectively accept the groups’ complaint as a writ request, she said.

Brightbill, the DOJ lawyer, pushed for the court to toss the case on jurisdictional grounds.

He triggered the frustration of several judges, however, when he noted that EPA paused its consideration of the petitioners’ formal objections when the three-judge panel issued its ban order last summer.

"You’re saying that after the panel issued its rulings, the government decided not to proceed on parallel tracks?" asked Judge Jacqueline Nguyen, an Obama appointee.

Brightbill contended that the panel’s ruling rendered the objections moot. But the fact that EPA hasn’t issued a decision on those objections is also why the court lacks jurisdiction over the case, he said, maintaining that there hasn’t been a final agency action — a threshold for getting into court.

The government lawyer stressed that EPA would be ready to take final action within 90 days of the 9th Circuit’s ruling in this case.

"There aren’t going to be any surprises in the next 90 days that would change anything, other than the EPA would make a final decision, correct?" Clinton-appointed Judge M. Margaret McKeown asked.

Brightbill said "it is fully their intent" to act within 90 days.

"Whoa, whoa, counsel, wait a second. I was a prosecutor for a long time, and whenever you hear, like, ‘It is the intent to do something,’ that’s not the same as ‘We’re going to do it,’" said Judge John Owens, an Obama appointee.

The environmentalists and other advocates are pushing the 9th Circuit to order EPA to either determine that chlorpyrifos is safe or grant their requests to finalize a ban within 60 days.

The court is expected to issue a ruling in the coming months.