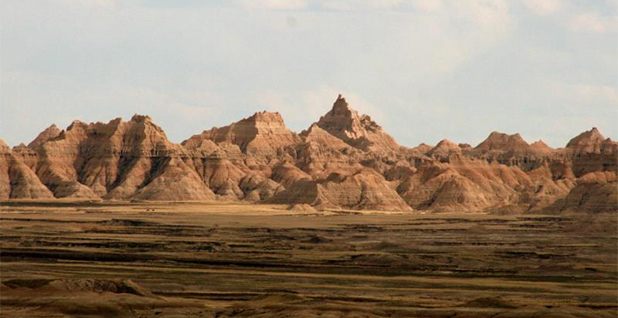 A former Badlands National Park seasonal employee has confessed to setting off a social media storm with a series of unauthorized tweets on climate change.

Just days into the Trump administration, the South Dakota park’s Twitter account went viral as it made several posts sharing facts on carbon emissions and ocean acidity. They were widely perceived as defying the new president, who has called climate change a hoax.

On Friday, the National Park Service released 1,448 pages of records on the incident in response to Freedom of Information Act requests by E&E News and other media outlets. The documents included the rogue tweeter’s admission of guilt, an email with the subject line "I take responsibility." NPS redacted his or her name.

"Fearing a gag order on climate science I willfully sent a series of tweets on the subject," the employee wrote to Mike Pflaum, the Badlands park superintendent. "I apologize to Ed Welsh. I accept full responsibility for my actions."

Welsh is a paleontologist and park ranger stationed at Badlands.

In the email, the tweeter said he or she discovered that through the social media managing platform Hootsuite, he or she still was logged into the park’s Twitter account.

"I loaded the tweets into Hootsuite. And proceeded to logout. I swear that I no longer have the login information," the tweeter said.

The email confession was sent close to 3:30 p.m. Jan. 24 — less than four hours after the posting of the first unauthorized tweet on the Badlands account.

In a subsequent email the following day, Cam Sholly, regional director of the Park Service’s Midwest Region, said "a former seasonal employee from Badlands" logged on to post the tweets "without knowledge or authorization from the park."

The tweets were deleted, with NPS saying the account had been "compromised" (E&E News PM, Jan. 24).

It had already been a rough few days on social media for the Park Service.

Emails released under FOIA show staff scrambling in response and dealing with a temporary Twitter shutdown. The Park Service came under more pressure as Trump himself requested photos of his inaugural crowds to rebut his critics (Greenwire, March 23).

The Badlands Twitter meltdown happened just days later, and similarly to the inauguration episode, reporters flooded the Park Service with queries on what was happening inside the agency.

Alexandra Picavet, communications chief for the Park Service’s Midwest Region, seemingly tried to make the best of a bad situation. She drafted a press statement saying that the Badlands area was created by "dramatic changes in climatic conditions," noting that it once was "an inland ocean" but is now "an arid landscape."

"Climate change and evolution are consistent themes in the social media postings of this park. In fact Badlands NP hosted a climate change workshop within the past year," Picavet wrote.

That statement doesn’t appear to have been released to the media.

"Thanks. Don’t do anything with this please," Tom Crosson, a Park Service spokesman, wrote in response to Picavet’s email.

The incident prompted the agency’s Midwest Region — which oversees Badlands — to hold a conference call the next day on "social media guidance." In an email to the region’s press officers, Picavet asked that at least one representative from each Midwestern park be on the morning call.

She also forwarded a message from Sholly, directing parks to change their Twitter account passwords and limit information posted to park operations and public safety issues.

"Irrespective of what was posted, the fact that this was able to happen reiterates the need for us to ensure our park and regional accounts are secure, and that you’re aware of who has access, and more importantly, who is designated/authorized to post information on those pages," Sholly wrote.

While the incoming administration wasn’t particularly pleased with the Park Service’s rogue tweets, the agency won praise from some Trump critics for striking a blow against the new president.

"YOU GUYS ARE AWESOME with the Twitter.. keep it up. I love you guys," said one email.

Another said, "I made a donation to the NPS in honor of the Badlands Tweeter today."

Postcards and other handwritten notes poured into the Badlands office, as well, rooting for the rogue tweeter.

"THANKS FOR BEING BADASSES AND STICKING IT TO THE MAN!" said another. "WE’RE ROOTING FOR YOU AND PARKS ARE DOPE AND GREEN AND STUFF."

But others were angered by the social media outburst.

One email said, "Evidently someone there thinks they are above the law and the will of the American people expressed in this last election."

A "66 year old Grandpa who loves camping with his grandkids—in Badlands" sent that message.

"So you want tweet your climate change crap and be political," said another email.

"I hope Trump defunds your park and closes it. And you all get laidoff playing your games quit being political and run the damn park."

The Badlands tweets grabbed others’ attention, as well, including the National Archives and Records Administration.

In a Feb. 1 letter, U.S. Chief Records Officer Laurence Brewer wrote to NPS about the reported "unauthorized disposal" of Twitter messages from the Badlands account. In turn, NARA asked the Park Service to conduct an investigation into the allegations.

In the resulting report, Andrea Quick, the Park Service’s bureau records officer, said the rogue tweets had been deleted. Screen shots of them, however, had been taken and were passed on to NARA.

The National Archives later responded to NPS, saying that it considered "this case closed."