‘I want to look better.’ For Trump, climate is a laugh line 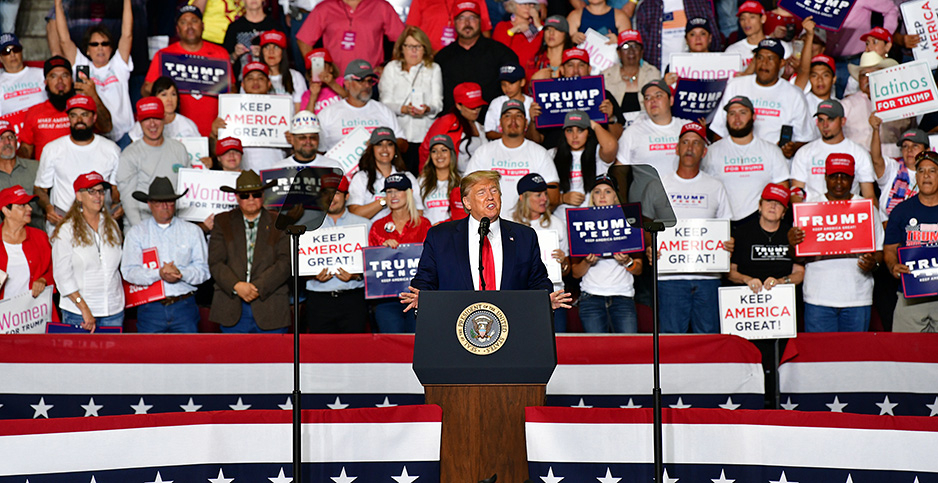 Limiting chemicals that contribute to the ozone hole means your hairspray won’t work.

Cars have so "much junk on them" to reduce gasoline consumption that they have become too weak.

"They make them now like papier-mâché; somebody touches them, and the entire car collapses," President Trump said at his New Mexico rally Monday night, describing fuel-efficient vehicles and his administration’s plan to roll back Obama-era clean car rules. "When somebody hits me, I want to be in as close to an Army tank as possible. No, they’re made out of papier-mâché; they weigh about 3 pounds; and if you get hit by a bus, it’s over."

A master of messaging and branding, Trump has transformed complex energy policies into laugh lines at rallies. And while the accuracy of such remarks is often questionable, they’re hard to dispute in public debates and other formats that will be a feature of the presidential election, experts say.

Trump is skilled at crafting an identification with his audience members, such that they feel he represents them in a particular way, even if large oil companies or car manufacturers are the true beneficiaries of his policies, said Anthony Arrigo, a rhetoric and communication professor at the University of Massachusetts, Dartmouth.

Climate and environmental policy, when recounted by Trump, is turned into a "caricature of liberalness," he said.

"It plays into his overall persona in which he’s trying to relate to the people as one of them and speak about things on their own level. He’s a master of identification, even though he is not like his audience at all. He’s a billionaire; he has his own plane; he has hotels around the world and golf courses," Arrigo said.

He added: "He sort of plays into that sort of sense of, ‘I’m like you; we think these things are dumb. They shouldn’t regulate toilets.’"

As Trump mounts an argument for a second term, some of the biggest cheers at rallies and speeches have been for his anecdotal sound bites about environmental policy.

Take, for instance, the Trump administration’s rollback of a plan to scrap incandescent lightbulbs. The plan would have reduced emissions and ultimately saved consumers money. Light-emitting diodes, or LEDs, are more expensive initially but use less energy and last far longer than traditional bulbs.

Trump leaves the policy details to others and simply sums up his plan as an effort to prevent people from looking "orange," which he tells the crowd happens when he is illuminated by LED lights.

For months, he’s told some variation of a story of an old couple futilely trying to watch television when the "windmills" stop turning and the power shuts off. There are no discussions on the merits or disadvantages of building out the nation’s electrical grid with more renewable energy. Instead, Trump tells his audience, wind turbines will make your "goddamn" television shut off — even if you’re in the middle of watching the Democratic debates.

"’Charlie, what the hell happened to this debate?’ He says, ‘Darling, the wind is not blowing,’" Trump said to Republicans at a House retreat in Baltimore last week. "The goddamn windmill stopped. That windmill stopped."

Other pieces of environmental policy battles have been transformed into pro-Trump artifacts of the cultural war between liberals and conservatives. When environmental groups and Democratic-controlled municipalities began banning plastic straws, the Trump campaign turned them into a product, selling a bundle of 10 red straws with Trump’s name emblazoned on them for $15. "Liberal paper straws don’t work," the campaign claimed.

Earlier this month, when facing backlash for marking up a weather map to back up his erroneous claim that Hurricane Dorian was going to hit Alabama, the Trump campaign started selling branded permanent markers.

Trump has spent decades perfecting his branding, even as he has had numerous business troubles and bankruptcies. He’s brought the lessons he’s learned into politics, said Jennifer Wingard, a rhetoric professor at the University of Houston.

Part of his now-presidential brand is sowing distrust about science, about the government and about Democrats, she said.

"It is selling a lifestyle. He’s selling defiance — that’s part of his brand; part of his brand is that he doesn’t care," she said, adding, "Part of his brand is also eradicating these environmental policies in the name of money. That’s ultimately what Trump is doing. It’s less about ideology, except his ideology is making money for him and anybody in business who supports him."

At his rally Monday, Trump told his supporters that his rollback of environmental protections was for them.

"I’m fighting for you," he said. "Look, it’s not the kind of thing most presidents would be fighting for, because they say, ‘Ah, let them pay more; let them be unsafe.’ They listen to the environmentalists."

That’s the type of rhetoric that will be hard for a Democratic opponent to counteract if the candidate gets into the weeds of policymaking, Arrigo said. When it comes to the attention of voters, the Democratic nominee will have to contend with Trump’s simple, but powerful rhetoric, he said.

"If you have someone on the other side who is a serious thinker on something and they try to tell that story," that person could be outplayed by someone with "that quick wit, the humor that would really be able to cut through a lot of the deep-think part of policy," Arrigo said.

"People have short attention spans; they want to be entertained; and they want someone to confirm their preexisting biases, and Trump fulfills those things, all in one," he added.