‘I will transition’: Biden promises move from oil 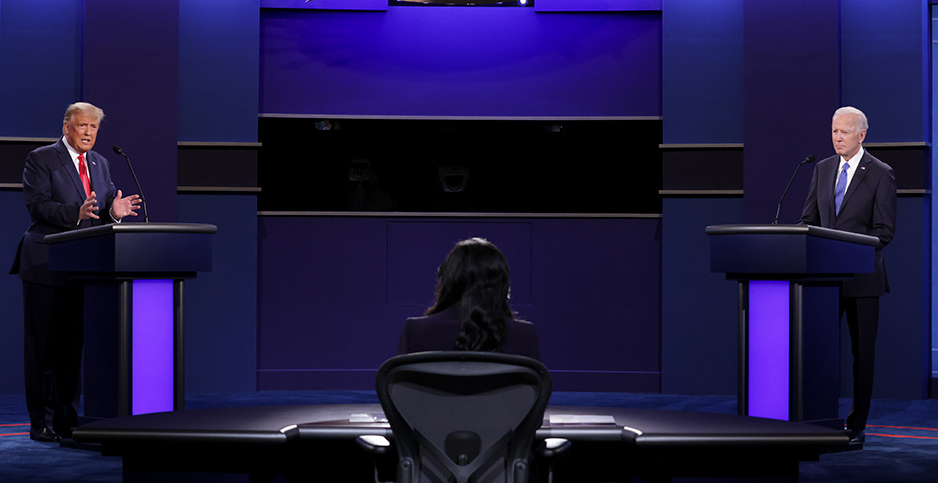 Joe Biden committed yesterday to bringing about a "transition" away from oil as part of his climate change and environmental plan.

The Democratic nominee’s statement in the final debate against President Trump was one of his clearest statements yet regarding a push to stop the use of fossil fuels.

The statement came in response to Trump, who asked if he would shut down oil. Biden had explained how Black, Latino and other communities of color frequently live near major fossil fuel facilities and suffer a disparate impact from those industries’ pollution.

"That’s a big statement," Trump repeatedly said to Biden’s "transition" pledge, before trying to capitalize on the comments.

Bided has previously committed to decarbonize the electricity sector by 2035 and reach net-zero emissions economywide by 2050. But while that would seem to leave little room for fossil fuels, he hadn’t yet promised to phase out the oil industry.

The American Petroleum Institute indicated after the debate that the oil industry will stick around.

"We are proud of the grit, innovation and progress we’ve made so that Americans no longer have to choose between environmental progress and access to affordable, reliable and cleaner energy," API President Mike Sommers said in a statement. "And we aren’t going anywhere."

And Oklahoma Rep. Kendra Horn, who supports Biden but is one of Congress’ most outspoken Democrats supporting oil and gas, distanced herself from Biden’s promise.

"Here’s one of the places Biden and I disagree. We must stand up for our oil and gas industry," she tweeted.

When asked about jobs, Biden said, "Well, they’re not going to lose their jobs. And besides, they’re going to … there are a lot more jobs that are going to be created in other alternatives."

The exchange was part of a 12-minute dive on climate change and the environment, after the moderator, NBC News’s Kristen Welker, had previously identified the issue as one of the six topics she would ask about.

In the debate — which was notably more calm than the previous one, with far fewer interruptions — the candidates also touched on hot-button issues ranging from fracking to Trump’s environmental record.

The environmental justice portion appears to be the first discussion of that subject in a general presidential debate.

When Welker asked about communities of color living near polluting sites, the president pivoted to jobs.

"The families that we’re talking about are employed heavily, and they’re making a lot of money, more money than they’ve ever made," he said.

"If you look at the kind of numbers that we produce for Hispanic or Black or Asian," said Trump. "It’s nine times greater, the percentage gain, than it was … under eight years of the two of them, to put it nicely."

Biden spoke about growing up near oil refineries in Delaware and accused Trump of not understanding environmental justice.

"It doesn’t matter what you’re paying them. It matters how you keep them safe," he said.

As in past debates, a significant portion of the environmental policy discussion was about fracking, with Trump trying to argue Biden would ban the oil and gas recovery process.

Biden responded: "I do rule out banning fracking," saying he would ban all new fossil fuel drilling permits on federal land.

Trump said there is tape of Biden saying he’d ban fracking, to which Biden challenged him to post such video on his website.

Biden did in fact make anti-fracking comments during the Democratic debate, including once saying, "No, we would work it out," and once saying that there would be "no ability for the oil industry to continue to drill, period."

A pledge to ban fracking, or seek to do so, was never part of Biden’s campaign platform, however, and his campaign staff quickly walked back each time he appears to endorse the idea.

"We have the Trillion Trees program, we have so many different programs. I do love the environment," he said, in response to Welker’s question about what he would do to fight climate change, the existence of which he has openly doubted.

"But what I want is the cleanest, crystal clear water, the cleanest air. We have the best, lowest number in carbon emissions, which is a big standard that I noticed Obama goes with all the time — not Joe, I haven’t heard Joe use the term because I’m not sure he knows what it represents or means — but I have heard Obama use it," Trump continued. "And we have the best carbon emission numbers that we’ve had in 35 years under this administration."

The United States’ greenhouse gas emissions have been on a general downward trend in recent years as natural gas and renewables have replaced coal for electricity generation, among other factors. And 2019’s levels were likely slightly lower than 2018, according to the Rhodium Group’s initial estimates, but 2018 was an increase above 2017.

Trump made a number of incorrect claims about environmental policy, including: Biden’s climate plan would cost $100 trillion; wind energy "kills all the birds"; and under Biden’s proposals for improving energy efficiency in buildings, "they want to knock down buildings and build new buildings with little, tiny, small windows."

The first mention of energy came early on in the debate, when Trump tried to use Biden’s son Hunter’s previous position on the board of Ukraine natural gas company Burisma Holdings to argue that the former vice president is corrupt.

Trump’s attempts to tie Biden, and Hunter’s position, to the firing of Ukranian prosecutor Viktor Shokin led to the House’s impeachment of Trump last year; the Senate voted against removing him from office. Biden defended himself and Hunter.

"We had this whole question about whether or not, because he was on the board of Burisma, a company, that somehow I had done something wrong," Biden said of how he dealt with Hunter’s board position.

"Yet every single solitary person — when he was going through his impeachment, testifying under oath, who worked for him — said I did my job impeccably," he continued. "I carried out U.S. policy. Not one single, solitary thing was out of line. Not a single thing."