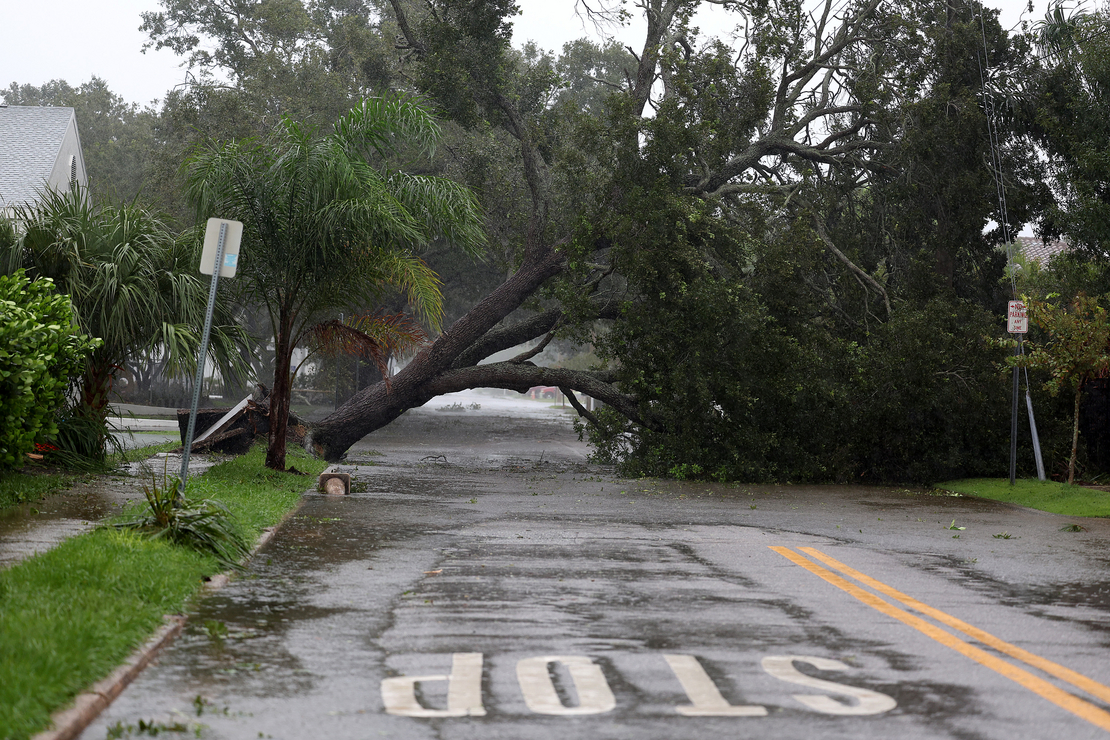 A tree blocked a road Wednesday after being toppled by winds and rain associated with Hurricane Ian in Sarasota, Fla. Joe Raedle/Getty Images

Hurricane Ian tore into the Florida power grid Wednesday with 155-mph winds and a catastrophic storm surge as it barreled across the state, knocking out electricity that in some cases might take weeks to restore.

The Category 4 storm made landfall near Cayo Costa on the southwest Florida coast at 3:05 p.m., but the state had been feeling Ian’s might for more than a day. Tornadoes, downpours on already saturated ground and punishing wind gusts left hundreds of thousands of Floridians without power since before dawn Wednesday.

The number of Florida power customers without electricity grew to more than 2.5 million by Thursday morning, according to PowerOutage.us.

“This is going to rank as one of the top five hurricanes to ever hit the peninsula,” Gov. Ron DeSantis (R) said at a late afternoon new conference. Even though Ian landed the biggest punch in southwest Florida, the central and northeastern parts of the state were not spared hurricane-force winds and widespread flooding.

“There’s going to be damage throughout the whole state,” he said.

Ian continued to dump rain over Florida as it became a tropical storm early Thursday, according to NOAA’s National Hurricane Center. It is expected to leave the state near the Kennedy Space Center and regain near-hurricane strength, the center said in its 5 a.m. update. The storm is likely to send tropical storm force winds into Georgia and North and South Carolina today, and the hurricane center has warned that “life-threatening” storm surge and catastrophic flooding is likely along the coasts of Florida, Georgia and South Carolina.

Ian is a major test for Florida’s power sector, which has spent billions of dollars to armor its grid against major storms. Electric companies meet with state utility regulators annually to review plans to strengthen transmission and ease restoration efforts after hurricanes and tropical storms.

But officials warned earlier this week that no grid is “hurricane proof,” and Eric Silagy, Florida Power & Light Co.’s CEO, predicted Wednesday that parts of his company’s grid will be damaged “beyond repair.”

Ian threw a one-two punch at the grid, with winds strong enough to toss trees and other debris into overhead power lines and a storm surge significant enough to flood out buried lines.

FPL is Florida’s largest electric company and has roughly 19,000 workers staged across the state to get the lights on as quickly as possible, Silagy said.

“We are deploying an army,” he said at a briefing webcast from FPL’s storm center in Palm Beach County.

He was unable to answer questions about how much of FPL’s power lines could be damaged or how long it would take to restore electricity to everyone.

When asked about power outages during a Wednesday afternoon news conference, Silagy turned and looked at a large electronic board that displayed a constantly changing radar image of Ian alongside a large six-digit number.

“I can tell you that currently we have 645,000 customers that are out of power,” he said. The company can determine that number because of its smart grid technology, he said. But there are nonetheless many unanswered questions.

“I can’t tell you if it’s a tree branch that’s on a line … or whether an oak tree has fallen over and taken out the pole that the line is attached to … or whether storm surge has come in and destroyed larger pieces of equipment or washed it completely away,” he said.

The utility will use a fleet of drones to gather a lot of that information, he said.

What’s more, the Federal Aviation Administration has cleared the electric company to fly FPLAir One, its commercial fixed-wing drone Thursday.

Silagy said he expects catastrophic damage on the state’s Gulf Coast, which has borne the brunt of Ian’s winds and storm surge.

“This is not going to be something that is going to be easy to assess in a few hours,” he said.

FPL is one of three investor-owned electric utilities in Florida, and all faced serious threats from Ian. Silagy emphasized those other electric companies as well as the municipalities and electric cooperatives could lose power or have damage to their power systems as well.

Florida has 16 distribution cooperatives and two generation and transmission cooperatives that serve more than 2.7 million customers in 57 of the state’s 67 counties, according to the National Rural Electric Cooperative Association.

The Edison Electric Institute, the trade group for investor-owned utilities, said more than 30,000 workers from 31 states have been in Florida to work at restoring power when conditions are safe. About 650 crews from more than 100 public power utilities in 19 states also are on their way to Florida to help, according to the American Public Power Association.