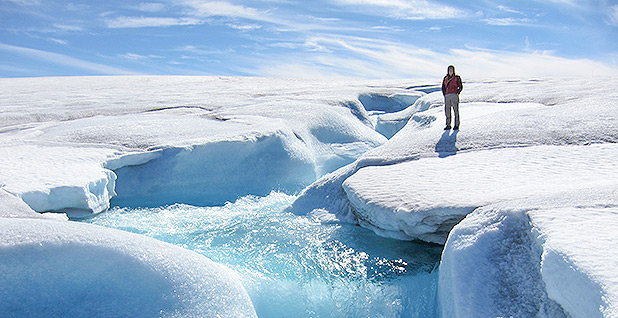 The current rate of warming in the Arctic is unprecedented in the last 2.5 million years, a new study has found.

Global warming is causing significant melting throughout the region and will claim the last remnants of a massive ice sheet that once covered all of North America and that remained stable for 2,000 years, according to findings published yesterday in Geophysical Research Letters, a journal of the American Geophysical Union. The Barnes Ice Cap, which is about the size of Delaware and is located on Baffin Island in the Canadian Arctic, is likely to disappear even if humanity curtails its combustion of fossil fuels at levels not currently expected, even under the most conservative estimations.

And while the ice cap’s disappearance may only cause sea levels to rise a few millimeters, its loss symbolizes a more dire threat of warming to the region, said Gifford Miller, a glacial geologist at the University of Colorado, Boulder, and co-author of the study. It shows large portions of the Greenland ice sheet are also at risk of disappearing, which would raise sea levels across the globe.

"It really says we’re looking at a fundamentally new climate state that we’re moving into that we probably haven’t seen at all in the last 2 million years, at least the last million years, which gives more urgency to trying to understand what the eventual expectations are for loss of ice mass in the Arctic," he said.

The Laurentide ice sheet covered North American for more than 2 million years, shrinking and growing due to climatic changes. About 14,000 years ago, it retreated as the Earth warmed, then stabilized about 2,000 years ago. In that time, the one section that essentially remained covered for millions of years was the Barnes Ice Cap. The disappearance of the cap, which is now 1,600 feet thick, will be accompanied by melting at much larger glaciers in the Arctic, including those that will be accompanied by sea ice loss.

"This is the disappearance of a feature from the last glacial age, which would have probably survived without anthropogenic greenhouse gas emissions," said Adrien Gilbert, the study’s lead author and a glaciologist at Simon Fraser University in British Columbia.

‘Soon, the big ice caps will take over’

Miller said the study wasn’t planned and came after researchers were conducting other work near the ice cap and noted how profoundly it had shrunk. Gilbert developed a model using the available observations to determine how long it would take for the ice cap to disappear.

Rock samples showed that they had virtually never been exposed to the atmosphere and were buried under ice for millions of years. So researchers concluded that the glacier had only shrunk to its current size three times in the last 2.5 million years. At most, it disappeared twice in that same time.

Particularly alarming, Miller said, is that the ice cap continues to melt even when the summer sun is at its weakest, something scientists did not expect to find.

The study is part of a growing body of research in the Arctic that has unsettled scientists.

Two studies published in Nature last year show that the rapid melting now occurring in the Arctic has no known precedent. Ice sheets scientists long thought to be stable were actually absent in the past, suggesting that they could again disappear in the future, researchers found.

While global temperatures have broken record highs in the last three years, according to the National Oceanic and Atmospheric Administration, Arctic sea ice has also recently begun setting records. This winter has seen record lows for sea ice cover in the region.

All of those suggest a much higher sea level in the near future. Sea-level rise is now coming from small glaciers, such as the Barnes Ice Cap, as well as the expansion of the sea as it gets warmer. But that could quickly change if the current level of warming is observed, Miller said.

"In the short term, these little glaciers are contributing as much as the big ones, but very soon, the big ice caps will take over as being the dominant source of sea level as we move into the next decade or two," he said.