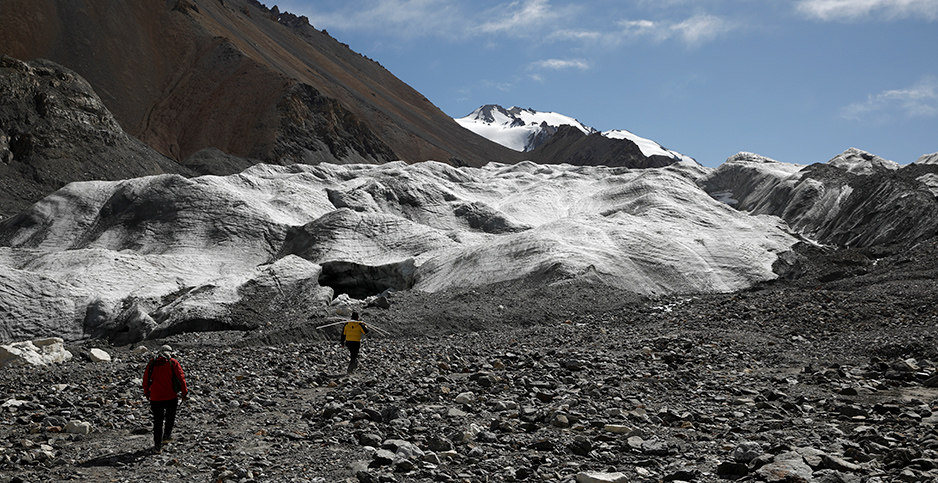 The world’s frozen places are shrinking — and they’re disappearing at faster rates as time goes by.

In the 1990s, the world was losing around 800 billion metric tons of ice each year. Today, that number has risen to around 1.2 trillion tons.

That’s according to a new study, published today in the journal The Cryosphere, calculating all the ice lost around the globe over the last few decades.

It’s the first to provide a truly global analysis of the planet’s vanishing ice, the authors say. It accounts for both the Greenland and Antarctic ice sheets, Arctic and Antarctic sea ice and mountain glaciers all over the world.

The research combines measurements from a variety of sources — mainly satellite studies, as well as on-site observations and numerical models.

The findings are stark. Ice is steadily disappearing across much of the world, and a majority of the losses are driven by climate change.

The Greenland and Antarctic ice sheets also have shed huge volumes of ice. Since the 1990s, Antarctica has lost more than 2.6 trillion tons and Greenland has lost nearly 4 trillion.

In Antarctica, most of these losses stem from marine-terminating glaciers, or glaciers that back up to the ocean. Recent studies have found that warm ocean currents are increasingly melting these glaciers from the bottom up, causing them to pour more ice into the sea.

Scientists still are investigating the sources of the warm water, but some experts believe climate change is altering ocean currents in ways that may be driving more melting.

In Greenland, some of the same processes also are at play. But more than half of Greenland’s ice sheet losses come from surface melting, or ice that melts on the top of the ice sheet. Rising air temperatures are a key driver of surface melting.

Losses from mountain glaciers and the two ice sheets are major contributors to global sea-level rise. Combined, the new study estimates they’ve raised sea levels by more than 34 millimeters, or around 1.3 inches, since 1994.

The study also looks at Antarctica’s ice shelves, floating ledges of ice that jut out from the ice sheet into the ocean. These ice shelves help to stabilize the ice sheet’s marine-terminating glaciers and hold back the flow of ice behind them.

In addition to the ice sheet’s losses, Antarctica’s ice shelves have lost more than 8.6 trillion tons of mass since the 1990s. This ice doesn’t add to sea-level rise — it’s already floating in the water. But as the ice shelves shrink, they destabilize the ice sheet’s glaciers and contribute to further losses.

Similarly, sea ice doesn’t contribute to sea-level rise as it melts away. But its losses still are significant.

Sea ice is an important habitat for wildlife, including polar bears and walruses. And as it melts away, it may help to speed up global warming. Ice has a bright, reflective surface that helps beam sunlight away from the Earth; as it disappears, it allows the ocean to absorb more heat.

Using a combination of satellite data and ocean models, the study estimates that Arctic sea ice has been shrinking by about 230 billion tons each year since 1980. Many experts believe that dwindling sea ice has sped up the Arctic’s rate of warming. Temperatures there are currently rising more than twice as fast as the rest of the world.

Antarctic sea ice, on the other hand, has actually grown since the 1980s by around 43 billion tons each year.

Scientists are still divided on what’s caused these gains. Some experts believe that changes in atmospheric circulation, linked to the gradual recovery of the Antarctic ozone hole, have something to do with it. Others believe they’re explained by natural variations in the Earth’s climate.

As the climate continues to warm, though, scientists expect this trend to reverse itself. In fact, it may already be happening. Recent studies suggest that Antarctic sea ice began declining a few years ago; experts are still working to figure out why (Climatewire, July 2, 2019).

Altogether, the research finds that ice loss all over the world has sped up by at least 57% since the 1990s alone. The researchers note that "there can be little doubt that the vast majority of Earth’s ice loss is a direct consequence of climate warming."