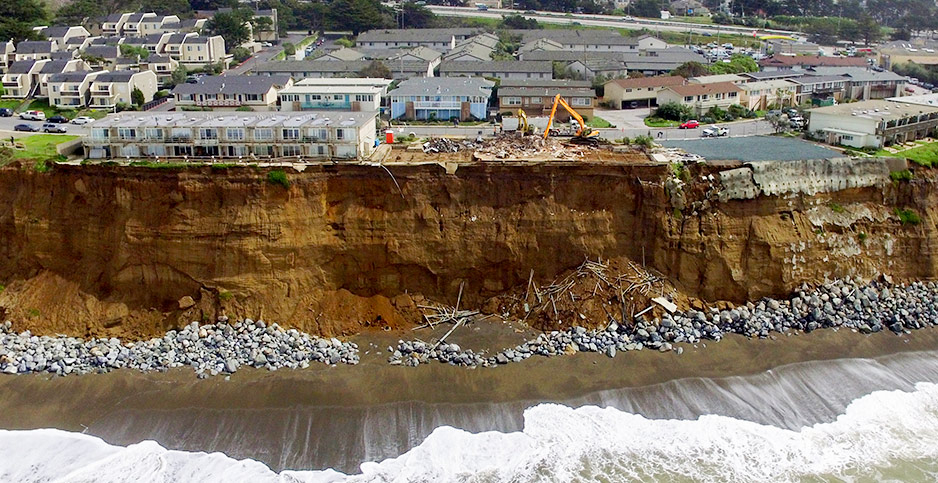 California's iconic coastline is threatened by rising seas. Pictured here is an apartment complex in Pacifica, Calif., that was demolished last year because of erosion. Terry Chea/Associated Press

First in a recurring series on the threat of sea-level rise in California.

Effects of higher oceans already are visible in the Golden State: Low-lying areas are experiencing more frequent flooding; chunks of beachfront bluffs have crashed to the shore, in some cases killing people sitting nearby; and the walkable beach is shrinking as the tide rises. Beaches in northern San Diego County and in Los Angeles County’s famed Malibu already have narrowed.

Those losses are minor compared with what could lie ahead, scientists say. Seas could rise 3 to 6 feet by the end of the century. If ice caps melt swiftly, oceans could swell as much as 10 feet. That disastrous scenario would submerge beaches and devastate coastal cities.

The Golden State faces tough decisions as it looks at how to proceed. One of the fiercest battles is shaping up over how to preserve beaches as coastal homeowners add sea walls, devices known to accelerate sand loss.

"The longer that we wait, the harder it’s going to be in the future," said Madeline Cavalieri, coastal planner at the California Coastal Commission, which has authority over most development in counties along the coast. "We need to put policies in place right now in order to ensure safety from hazards, in order to ensure orderly change to development patterns that allow us to maintain beaches."

Beaches are just one piece of the Golden State’s sea-level-rise picture. Much of the coast faces damage without added protections. Higher waters threaten hundreds of miles of roads, railways, harbors, airports, power plants, sewage treatment facilities, and thousands of businesses and homes, the state’s Natural Resources Agency said in April as the California Ocean Protection Council (OPC) received a report detailing dangers ahead.

The biggest part of California’s freshwater system, the San Francisco Bay Delta, also will feel the effects of higher oceans. It has 900 miles of levees and dikes, infrastructure worth billions of dollars, he said.

"The water supply where we capture fresh water, how we move water around the state of California, is definitely in jeopardy," Patzert said.

The state is preparing at multiple levels, though many of the steps are advisory only. The OPC, along with the California Energy Commission and Gov. Jerry Brown’s (D) Office of Planning and Research, are formulating guidance for state and local officials, based on that sea-level rise report received in April. It’s an update to a 2013 analysis, incorporating newer science. The guidance expected early next year will be nonbinding.

State and local decisionmakers face a Hobson’s choice in crafting policies, with equally unpleasant alternatives. As the sea rises, water wears down bluffs and other land, leaving space that sand fills in. That moves the beach inland. But in much of coastal California — particularly in the south — hundreds of homes and valuable infrastructure line the coast.

Many of those homes have sea walls that block high tides. When waves hit the walls, the water scours out the sand at the base and sides of the barricade. Walls also set the back of the beach, so the sands will eventually disappear when the water gets high enough, experts said.

"There’s always going to be beaches if they have room to evolve," said Patrick Barnard, coastal geologist at the U.S. Geological Survey. "If there’s no area for them to migrate, then they effectively get drowned."

Two recent reports described the potential impact of sea-level rise to California’s coast. A March analysis from USGS predicted sea-level rise could swallow 31 to 67 percent of Southern California beaches by the turn of the century, unless there’s human intervention to stop it, and depending on greenhouse gas pollution.

The draft analysis submitted to the OPC in April offered similar numbers. It included the possibility of the West Antarctica and Greenland ice sheets melting swiftly, lifting seas as much as 10 feet.

Helen Fricker, professor of geophysics at the Scripps Institution of Oceanography at the University of California, San Diego, helped write that report. She said she believes ice sheet melting is accelerating and is now irreversible. But it’s difficult to know what that means in terms of how much seas will rise, and in what time frame, she and other scientists said.

"We don’t know the likelihood of a really huge event. The fact is we can’t rule it out," said Josh Willis, climate scientist at JPL, who is studying the Greenland ice sheets. "Every time we make a discovery in Greenland or Antarctica about ice melt, we revise our projections upward. I think that’s alarming.

"The fact that that’s even a possibility is something that we have to take very seriously," Willis added.

If West Antarctica’s sheet melts quickly, it would wallop California with greater sea-level rise than the world average, the OPC report said. That’s due to a kind of gravitational effect to ocean currents and the way the Earth rotates, Fricker said. Three feet of sea-level rise coming from Antarctica would mean it’s 4 feet higher in California, she said.

Low-lying areas near the beach, where the water table is close to the surface, will flood during high tide. It’s what’s happening now in Miami, he said. Areas of Southern California most likely to be hit include parts of Huntington Beach, Newport Beach and Seal Beach in Orange County, and Mission Beach and Del Mar in San Diego.

Choosing how far to go to protect the beach will raise big questions for the Golden State, said Katharine Mach, senior research scientist at Stanford University.

"Our current moment is really incredibly unique in the entirety of human experience," Mach said. "People have always loved to live near the coast. We’re in a unique point where the risks are going up from increasing sea levels."

“We don’t know the likelihood of a really huge event. The fact is we can’t rule it out.”

Traditional ways of dealing with properties might not work anymore, she said, adding, "It’s a major governance challenge."

"California’s had a lot of conversations about resiliency over the years but has done very little in the way of policy to start to ensure resiliency," said Stone, a former member of the California Coastal Commission.

"We have a lot of public and private infrastructure that are built in areas that are going to fail," Stone added. "As we change what California looks like, and we build buffers, and we build that resilience in, those policy changes are going to be very difficult."

California beaches bring in big money. The ocean and coast contributed $44.2 billion to the state’s gross domestic product and more than 500,000 jobs in 2013, the latest year available, the state said in its climate adaptation plan, Safeguarding California.

To replenish eroding beaches, many cities and counties have spent many millions of dollars on sand replenishment. That solution might not work long term, Cavalieri said. "It’s going to become more and more expensive," she said, "and it’s not clear whether there’s enough sand. You have to have more and more sand. Where would it come from?"

Right now, it’s often dredged from harbors, she said. There are ecological impacts, she added, such as the need to match grain size so creatures using the sand aren’t suffocated.

The coastal commission currently plays one of the biggest roles in deciding what happens to beaches. The powerful agency mandates that cities consider sea-level rise in their local coastal plans. They have to update those when they change their general plans. So far, more than 30 of 76 cities in the coastal zone are looking at how sea-level rise will affect their beaches, homes and infrastructure, and protection options.

The coastal commission is incorporating projected sea-level rise into its decisions. The result is controversial policies.

The California Coastal Act — an expansive protection law — allows sea walls for any homes built before the measure took effect in 1977. Homes built after that face restrictions. The commission argues people shouldn’t be developing in areas that will be hazardous in the future.

The agency increasingly is requiring those building or redeveloping properties to waive their right to install sea walls and other protective devices. Developers seeking to build must stipulate that they’re building in an area "subject to coastal hazards," including coastal erosion, high seas, ocean waves, storms, tsunamis, the tide eating away sand, coastal flooding, and liquefaction.

They must agree to record in a deed attached to their property record that they’ve accepted those conditions. That’s intended to make sure any future buyer would see the conditions, Cavalieri said.

"It’s a real issue right now," Cavalieri said. "If we don’t start to think about and start to prepare for the need to relocate some development away from the shoreline, we’re not going to have a beach."

Larry Salzman, senior counsel with the group, said the commission wants to phase out sea walls and force beachfront and waterfront homeowners to sacrifice their properties. Some coastal commissioners and staff favor the idea of moving properties inland as the beach moves landward, he said.

"So there is hostility to shoreline protective devices," he said. "There is a concept of managed retreat, that in the face of sea-level rise rather than using technology and engineering to protect property along the coast, that property ought to be subject to erosion and let go, become uninhabitable."

The commission has authority to tell new developments they can’t add sea walls, Cavalieri said. When it comes to moving existing homes, she said, "you’re talking about more of a carrot approach, not a stick approach."

Options include offering to buy homes and lease them back to the previous owners, or renting them out as vacation homes for 50 to 75 years until the beach narrows to where it’s unusable. Then the homes could be removed.

Asked how the state could afford to buy houses that likely would cost several million dollars each, Cavalieri said, "Yep, it’s a very big challenge."

The coastal real estate market "hasn’t corrected itself yet to address sea-level rise and climate change in general," Cavalieri said.

Policies adopted at the local level, like the requirement for recording deeds with sea wall waivers, "could assure that the market correction happens in an orderly way." That’s preferable, she said, to "having a lot of investment going into these very hazardous areas, which then become threatened, and severely threatened at some point, and then all of a sudden there’s a crash."

Salzman argued that if California believes removing beach homes is needed, the state should use the law of eminent domain, or seizing property for public good. That would mean buying the homes from people at fair market value, instead of making them waive the right to sea wall permits.

Assemblyman Stone has offered a measure on sea walls, A.B. 1129. It would put into law the coastal commission’s current practice on sea walls, allowing homes built before 1977 to install barriers. Homes developed after that can apply for a sea wall permit but aren’t guaranteed to get one.

"This is a rifle shot at homeowners’ ability to protect their property against erosion," Salzman said.

Stone said the measure doesn’t change existing practice and that the accusation by the Pacific Legal Foundation and others is meant to scuttle the measure.

The bill also would give the commission authority to fine people who put up sea walls without a permit, he said, or who obtained only an emergency permit. The latter requires people to go back and secure a permanent permission. Stone said there are about 140 sea walls that fall into those categories.

"Everywhere we armor as the seas rise means that we’ve lost that for public access," Stone said. "We need to make sure that we have beaches."