‘Iconic movement’: Lawyer for tribes on fate of Dakota Access 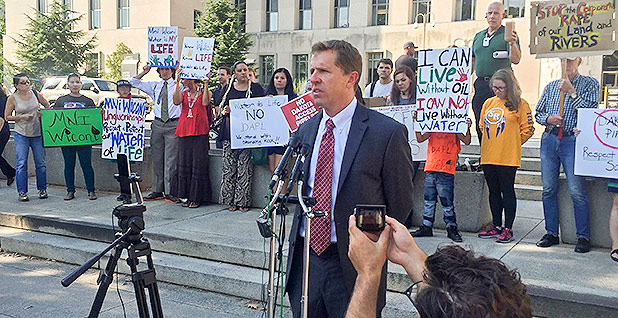 When he began representing tribes opposed to the Dakota Access pipeline five years ago, Earthjustice attorney Jan Hasselman could not have predicted how significant the case would become.

The crude oil project has been at the center of a tumultuous legal fight since the summer of 2016, after several tribes warned a federal court of the risks posed by the 1,172-mile pipeline, which crosses near the Standing Rock Sioux Reservation.

Dakota Access has now been operational for nearly four years. But in a stunning ruling, the U.S. District Court for the District of Columbia last year pulled a key approval for the project and ordered it to be shut down and drained of oil.

A federal appeals court later reversed the shutdown order, but it affirmed the decision to scrap the pipeline’s easement to cross a man-made water body near the Standing Rock Reservation and invited the Biden administration to consider whether the project can operate without that approval (Energywire, Jan. 27).

Hasselman has been involved every step of the way.

"We’ve always tried to emphasize the historical context, because it really resonates for the Sioux tribes in a way that’s difficult for non-Indigenous people to understand," Hasselman said.

While the land where the pipeline crosses is not within the boundaries of the reservation, it is under lands that were supposed to be permanently protected for the Sioux Nation under the 1851 Fort Laramie Treaty, which the federal government later violated.

The tribes’ opposition to the project drew international attention as demonstrators camped out at the construction site for months to block work on the project.

The tribal challengers first sought in July 2016 to block the use of a streamlined water permit for the pipeline, arguing that the Army Corps should have sought an individual permit for the portion of the pipeline beneath Lake Oahe, a reservoir on the Missouri River in the Dakotas, located about a half-mile from the Standing Rock Reservation.

After their motion for a preliminary injunction to block the pipeline’s water permits failed, the tribes pushed for the Army Corps of Engineers to do more analysis of the risks of Dakota Access under the National Environmental Policy Act in hopes of getting the pipeline shut down.

The tribes’ legal battle then zeroed in on whether the Army Corps should still be required to draft an EIS to study the oil spill risk associated with the easement for the pipeline to cross beneath Lake Oahe. They argued that the agency had not properly conducted consultation with tribal experts about their concerns.

The D.C. district court, followed by the U.S. Court of Appeals for the District of Columbia Circuit this year, has ordered the Army Corps to conduct an EIS. Until it does, its easement for the pipeline is on ice.

The project’s fate now rests in the hands of the Army Corps, which is expected to make an announcement about the pipeline’s future in the coming weeks.

Hasselman spoke with E&E News about the environmental justice concerns surrounding Dakota Access and whether the legal battle over the pipeline could prompt federal agencies to rethink their approach to NEPA reviews for major projects.

Did you have a sense early on how important this case may end up being, or did that realization come as the protests picked up in the summer and fall of 2016?

I don’t think any of us imagined this would become the global iconic movement that it did. I think that’s just one of those things that you can’t predict.

In a lot of respects, this looks like a pretty garden-variety case of environmental racism and a garden-variety challenge to NEPA compliance, but for whatever reason, it pierced the public consciousness and became a global rallying cry.

The claim that sticks out to me is the discussion of oil spill risk from Dakota Access, but that wasn’t the claim you were making from the beginning.

No, in fact the argument at the preliminary injunction phase was unrelated to NEPA. At that time, the easement to cross Lake Oahe had not been issued. It was just the construction permits around Lake Oahe.

The focus of the preliminary injunction hearing was the destruction of culturally sacred sites and the violations of the National Historic Preservation Act, so the NEPA oil spill stuff didn’t arise until Trump came into office and reversed the EIS process and issued the permits.

Was the oil spill claim one you couldn’t bring until the pipeline was operating?

In order to bring a preliminary injunction, you need to show an imminent harm, and they weren’t putting the pipeline in at that time. They were just doing the construction work up to the river’s edge.

The concern is that the pipeline’s crossing beneath Lake Oahe would leach oil into the water supply. Is that right?

That’s right, but it’s not just in that particular location. There are any number of ways the pipeline could spill or leak in ways that could find their way into Lake Oahe. It could happen a mile upstream where it crosses a small tributary or something like that. In fact, that might be more likely, because there, it’s only buried a few feet under the ground.

Can you offer examples of what good tribal consultation would have looked like?

There continues to be a real misalignment between how the government views its obligations under consultation and the expectations of tribes around it.

What we saw in Standing Rock was unfortunately very typical, which was a kind of check-the-box exercise where the decision has been effectively made. They go into the meeting and listen politely and then go back and do whatever they were going to do. Consultation has to actually influence the decision.

At the very first meeting — there was one meeting with [Dakota Access developer Energy Transfer LP] and another meeting with the Army Corps — the Standing Rock Sioux Tribe made it very clear that this location would be wholly unacceptable for a variety of very serious reasons, ranging from water protection, the sacredness of the site, and burials and cultural sites in that immediate vicinity, and none of it made the least bit of difference.

The cake was baked before they ever went and talked to them.

This year, the D.C. Circuit affirmed that the Army Corps had to do more analysis on Dakota Access. What precedent does this decision set?

I think this is a really consequential decision, not just for the Standing Rock case, which by itself is consequential, but the standard it sets around this concept of scientific controversy. I think this raises the bar on agencies to better explain their decisions in light of technical disputes around things like risk.

Agencies need to grapple meaningfully with input from states, communities, tribes, environmental groups that are critical of the decisions they are making or reveal there are potential impacts that aren’t being fully acknowledged.

I think agencies have gotten away with sweeping this stuff under the rug, and hopefully, this decision makes that harder.

If Dakota Access were proposed today, do you think that it would have gone more slowly, or is there still a lot of progress yet to be made in engaging effectively with tribes?

When you look at the rhetoric and some of the nominations coming out of the Biden administration, at times it takes my breath away, the extent to which environmental justice is centered in our national discussion in a way that has never happened before.

That’s very encouraging. Of course, the proof will be in the decisions that get made, and all the rhetoric in the world can’t make up for bad substantive decisions.

In the next month, the Biden administration will have a pretty key test of its commitment to environmental justice and Indigenous sovereignty [on the question of shutting down Dakota Access].

I do think one outcome of this whole fight at Standing Rock has been a greater awareness and understanding of sovereignty and of history. There’s still a lot of people in this country that don’t even know that Indians still exist, which is sort of shocking.

Hopefully, whatever happens with the pipeline, there is a better understanding of the importance of these communities and better decisionmaking going forward.

We are expecting a decision from the Army Corps next month on whether to temporarily stop operation of Dakota Access. How are you feeling about the chances of a shutdown?

I guess I’m a little hesitant to speak on the record about this.

One thing I’ve been telling folks is I don’t think they will do a big in-court reveal. We will know some time before then.