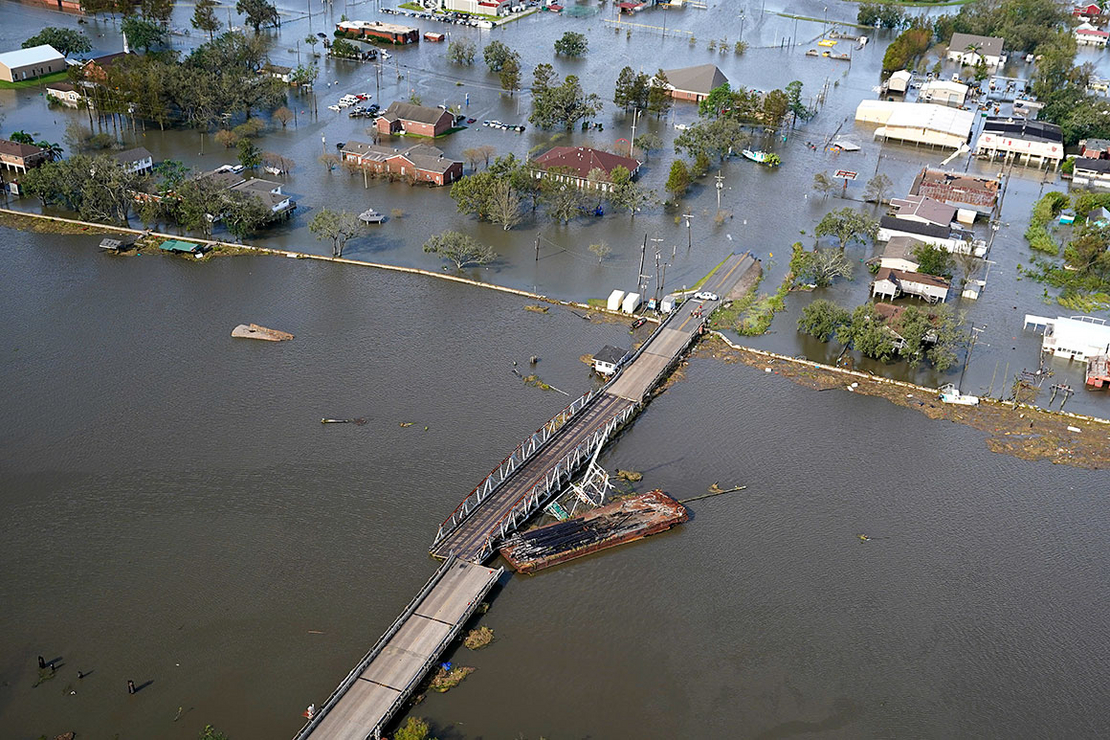 A loose barge rammed into a bridge in Lafitte, La., during flooding from Hurricane Ida. AP Photo/David J. Phillip

New Orleans is expected to eventually recover from Hurricane Ida.

How the rest of Louisiana and other states fare is an open question.

The Category 4 storm battered an aging network of infrastructure systems that supply power, transportation and water to millions of people from Louisiana to the Ohio Valley. These aging power lines, roads and bridges, and wastewater plants are often weakening at a time when storms are strengthening.

Whipping winds and flash flooding swept across portions of central Tennessee last night and rode up the spine of the Appalachians today in what could become one of the most harmful hurricanes since 2017.

Parts of the state — including the New Orleans metro area and low-lying parishes nearby — could be without power for weeks, according to Entergy Corp., the regional electric utility that reported 1 million outages across its system on Tuesday.

“When you think about the configuration of that spider web of the transmission grid … it’s like the storm hugged it,” Rod West, Entergy’s group president of utility operations, said yesterday.

The disastrous unfolding of what is now tropical depression Ida is also testing House Republicans who oppose a $1.2 trillion infrastructure bill that could help Louisiana and other states rebuild stronger after climate catastrophes. The bill passed the Senate last month, and the lower chamber is slated to cast its vote at the end of September as Democrats mull a separate reconciliation package (Greenwire, Aug. 30).

“This definitely changes the equation,” Norma Jean Mattei, a lifelong resident of New Orleans and former president of the American Society of Civil Engineers, said in a telephone interview from Metairie.

“We in Louisiana, as well as in the rest of the country, have aging highways and bridges. The Department of Transportation knows where the deficient [infrastructure is], and they’ve got a waiting list of things. This [bill] allows for a lot of those projects on that list to actually be constructed,” she said.

The bipartisan infrastructure plan offers $550 billion in new spending over five years, including $55 billion to harden and upgrade water and wastewater systems, and $46 billion for resiliency to tackle floods, wildfires and historic drought.

The bill also includes billions of dollars to address a long backlog of federal flood control projects. For Louisiana, that means holding the line against rising water in the Gulf of Mexico.

Moderates in both chambers, including Sen. Bill Cassidy of Louisiana, a Republican, have made clear that Ida’s destructive power should be a clarion call for the House to pass the landmark infrastructure bill later this month.

“Where Republicans are, I don’t know yet,” Cassidy said yesterday on CNN. “But I’m sure hoping that Republicans look around my state, see this damage and say, ‘If there’s money for resiliency, money to harden the grid, money to help sewer and water, then maybe this is something we should be for.'”

But other Republicans like Louisiana Rep. Garret Graves voiced opposition to the bill. Graves, in an interview with E&E News today from Louisiana, described widespread destruction, severely damaged homes and “people still underwater.”

Graves, who serves as the ranking member on the Select Committee on the Climate Crisis, questioned assertions by proponents of the infrastructure bill that claimed Louisiana would receive up to $6 billion. He said the state had secured more than that through individual projects in the past.

He also reiterated Republican concerns about a provision in the Army Corps of Engineers’ fiscal 2022 budget request against helping the fossil fuel industry, and said it’s indicative of how the Biden administration will dole out funds.

Sen. John Kennedy (R-La.), who voted against the infrastructure bill, described the conditions in Louisiana yesterday on Fox News like this: “It’s like riding a bike and the bike is on fire and you’re in hell. But we’re gonna get through it. My people are tough as a boot.”

He publicly thanked Verizon for “getting the cell service back,” but said little about hundreds of millions of dollars in infrastructure damage that could break his already cash-strapped state.

About 20% of the state’s population lacked clean tap water as of yesterday afternoon, including more than 700,000 whose systems were offline and 257,000 under boil water advisory, according to the Louisiana Department of Health.

Entergy officials said today that 11,500 customers in New Orleans are reconnected to the grid, but added in a statement it’s a “slow and steady” process.

The highest grade was a C+ for dam conditions. The lowest was a D- for drinking water systems, according to the document, which noted such problems “can be greatly exacerbated by natural disasters, particularly where backup power and other system redundancy is lacking.”

While authors of the infrastructure package have touted the inclusion of more than $55 billion for drinking and wastewater, it’s also become clear in recent weeks that utilities vying for grants or loans for upgrades and fixes, not to mention work of mapping and removing lead pipelines, will face stiff competition.

Kam Movassaghi, emeritus professor of civil engineering at the University of Louisiana in Lafayette, directed the 2017 infrastructure report card. He said officials have made some progress in girding the shoreline since Hurricane Katrina drowned southeast Louisiana in 2005.

“In terms of coastal restoration, we have done some really interesting and good projects in that area. The other areas basically we’ve just kept things going. We haven’t addressed the critical needs in those areas,” Movassaghi said. “Certainly, the state has a responsibility to protect the lives and welfare of the public.”

The question is where the money will come from and who is going to pay.

“The really hard task is to keep the politics out of it and make [decisions] based on some rational and logical thinking and science rather than politics,” added Movassaghi, who served as Louisiana’s secretary of transportation and development from 1998 to 2004 under former Republican Gov. Mike Foster.

Mattei, the professor of civil and environmental engineering at the University of New Orleans, said many of the nation’s primary infrastructure systems “are as old, on average, as our interstate highway system.”

“But you have to ask just how long are they going to last before you go in and do major reinvestment, so we can get ahead of the game instead of playing catch-up when we have these disasters.”