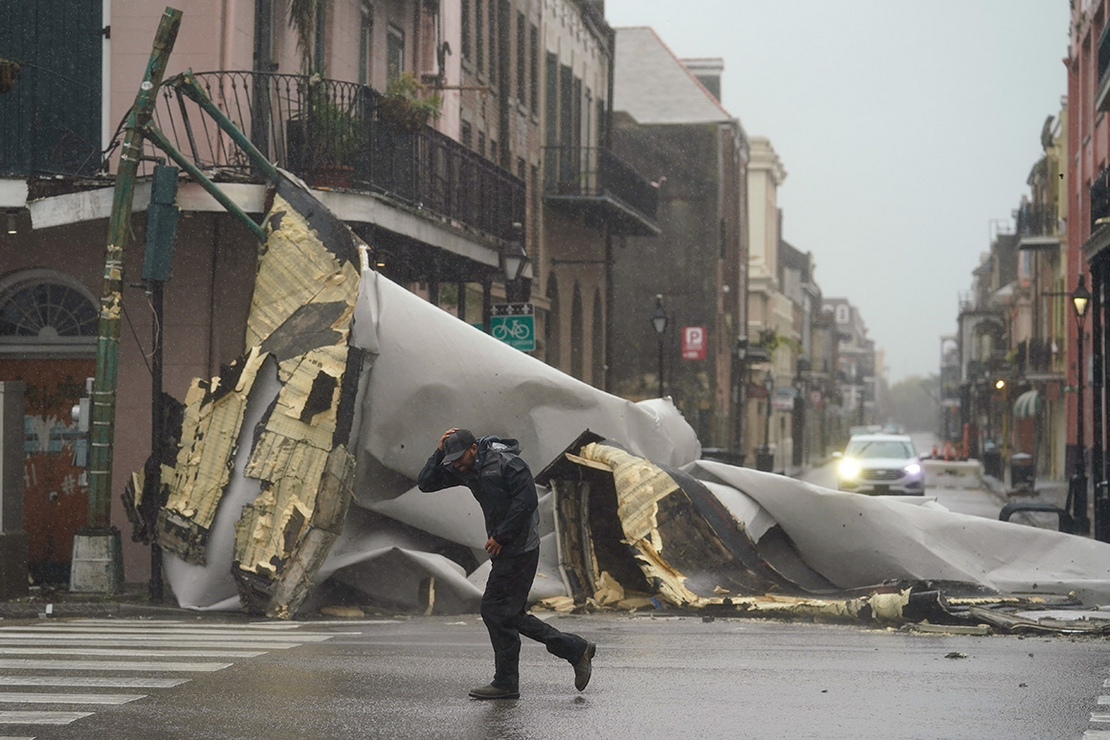 A man passes by a section of roof that was blown off a building in the French Quarter yesterday by Hurricane Ida winds in New Orleans. Eric Gay/AP Photo

As Hurricane Ida barreled toward Louisiana Friday night, New Orleans Mayor LaToya Cantrell said she had decided against a citywide mandatory evacuation order because the storm would arrive too quickly.

“We don’t have the time,” she said, prompting plenty of second-guessing when one of the most powerful hurricanes in U.S. history struck yesterday afternoon.

The hurricane, a Category 4 storm that produced winds of 150 mph before making landfall, offered the latest example of what weather forecasters call “rapid intensification,” a growing phenomenon that many researchers believe is clearly linked to climate change.

While the full extent of the storm’s impact had yet to come into focus this morning, the hurricane was blamed for at least one death, when someone was hit by a falling tree outside Baton Rouge. All of New Orleans lost power around sunset yesterday as the storm blew ashore on the 16th anniversary of Hurricane Katrina, leaving more than 1 million customers in Louisiana and Mississippi without electricity (see related story).

An area just west of New Orleans got about 17 inches of rain in 20 hours, Greg Carbin of NOAA’s Weather Prediction Center tweeted. Flooding from the rain and surge in the maze of rivers and bayous south of New Orleans threatened hundreds of homes, with people posting their addresses on social media and directing search-and-rescue teams to their attics or rooftops.

While the 2020 Atlantic hurricane season produced a record 30 named storms, it also brought something that received far less attention: 10 rapidly intensified hurricanes similar to Ida, which a NOAA official described as “remarkable.”

To be categorized as a rapidly intensified storm, winds must pick up by at least 35 mph within a day. Even by that measure, Hurricane Ida was extreme: While meteorologists measured winds of roughly 85 mph on Saturday morning, they grew 65 mph stronger in a 24-hour period.

As Cantrell discovered, such rapid changes can greatly complicate hurricane planning for local and state officials, who must decide in advance when and how quickly to move people out of harm’s way.

“It’s a little worrisome — of course, it puts people in a bind because it’s a day out when it starts intensifying,” Kevin Reed, associate dean for research and an associate professor at the School of Marine and Atmospheric Sciences at Stony Brook University, said in an interview last night.

Reed said that predicting rapid intensification remains “a significant challenge” for meteorologists, even though he said NOAA forecasters have become “really good at predicting trajectories of where storms are going to go.”

In the case of Ida, he said, New Orleans officials knew days ago that the hurricane was headed their way and that conditions were right for a rapidly intensified storm.

“The warmer the ocean surface temperature, the more likely a storm will undergo rapid intensification,” Reed said. “So if you have an increase in rapid intensification likelihood with warming, you’ll see a shift of a higher percentage of storms reaching these major Category 3, 4 and 5 intensities.”

In an assessment of the 2020 hurricane season in November, Jim Kossin, then an atmospheric research scientist at NOAA’s Center for Weather and Climate, said the 10 hurricanes that rapidly intensified last year — Hanna, Laura, Sally, Teddy, Gamma, Delta, Epsilon, Zeta, Eta and Iota — included some that “underwent explosive intensification.”

While 2020 broke the all-time record for hurricanes set in 2005, Kossin said the year brought both “very rapid intensification and very slow-moving hurricanes, both of which have recently been linked to climate change.”

In previous years, a number of other hurricanes were categorized as rapidly intensified storms. They included Hurricane Harvey, which triggered catastrophic floods along the Texas coastline in 2017, and Hurricane Maria, which devastated Puerto Rico in the same year. Hurricane Michael joined the ranks in 2018, and Hurricane Dorian in 2019. Maria, Michael and Dorian all achieved the maximum rank of Category 5 before making landfall.

A 2018 study in Geophysical Research Letters said climate change isn’t necessarily the major driver. The study said that a natural climate cycle, which causes ocean temperatures to swing between higher and lower phases every few decades, is probably a big factor in the recent increase, but the researchers added that “the role of anthropogenic climate change cannot be ruled out."
Other studies on rapid intensification have placed a bigger emphasis on global warming.

A 2019 study in Nature Communications also found an increase in rapid intensification in the Atlantic Ocean. Through model simulations, the study suggested that climate change has played a role.

While New Orleans Mayor Ray Nagin ordered a mandatory evacuation for Hurricane Katrina in 2005, Cantrell said she decided against it because there was inadequate time to implement contraflow procedures for highways.

Kelly Hereid, director of catastrophe research and development for Liberty Mutual Insurance, predicted “there is going to be a lot of Monday morning quarterbacking” about Cantrell’s decision.

Matthew Cappucci, an atmospheric scientist and meteorologist for Washington, D.C.’s FOX 5 television, called the move “incredibly disheartening to see,” noting that the mayor had sufficient time to react.

And Brian McNoldy, a senior research associate at the University of Miami’s Rosenstiel School of Marine Science and Atmospheric Science, said that it was clear from the first weather advisory on Thursday morning that the hurricane would pose a huge threat to the northern Gulf Coast.

Of the mayor’s decision, Reed said: “Let’s just hope the ramifications of that decisionmaking aren’t too impactful on the people in the area.”

But Reed acknowledged that cities and states are in a tricky position in deciding how to react when it comes to evacuations.

“We kind of go back and forth,” he said. “One storm doesn’t rapidly intensify and is relatively weak, so the next time, we start to wonder, ‘Oh, is this going to be weak like the last one?’ We’ve got to continue to trust NOAA and the National Hurricane Center. They’re not going to be right every single time, but we still have to make sure we’re following their guidance.”

Reed said there’s a larger message for the public, too.

“It’s important that we remember that climate change is not a problem for the future,” he said. “Climate change is here, and it’s actually changing the characteristics of these storms.”

Ida’s 150-mph winds tied it for the fifth-strongest hurricane ever to hit the mainland. Its winds were down to 45 mph early today, and forecasters said it would rapidly weaken while still dumping heavy rain over a large area.

As the weather died down shortly before dawn, people began walking around neighborhoods with flashlights, dodging downed light poles, pieces of roofs and branches.

"I had a long, miserable night," said Chris Atkins, who said he was in his New Orleans home when he heard a "kaboom" and all the plasterboard in the living room fell into the house. A short time later, the whole side of the living room fell onto his neighbor’s driveway.

"Lucky the whole thing didn’t fall inward. It would have killed us," he said.

Rescuers moved to launch hundreds of boats into the floodwaters in the morning. The Louisiana National Guard said it had activated 4,900 personnel and lined up 195 high-water vehicles, 73 rescue boats and 34 helicopters. Local and state agencies were adding hundreds of more.

Jefferson Parish in suburban New Orleans knew of 500 people who had said they were going to stay in areas that were flooded, and it began sending out dozens of boats to account for everyone and start rescuing them, Parish Council member Deano Bonano told WWL-TV.

"I know people have family members in here they are trying to check on. They can’t get to them. The water is too high. We’re going to do our best efforts to get them out," Bonano said.

Parts of Interstate 10 — the main east-west highway along the Gulf Coast — were closed because of high water and debris on the road. At one spot, near LaPlace, La., the water over the highway was at least 4 feet deep, state officials said.

Ida was expected to pick up speed tonight before dumping rain on the Tennessee and Ohio River valleys tomorrow, the Appalachian mountain region Wednesday and the nation’s capital on Thursday.

Chelsea Harvey and the Associated Press contributed to this report.