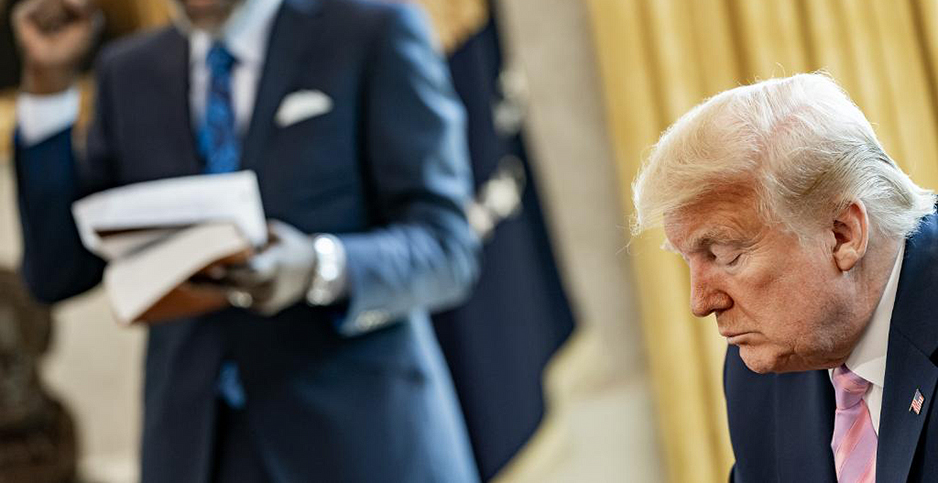 Metrics that assess the "value of statistical life" are one factor economists say President Trump could use as he weighs when the U.S. economy should be reopened amid the coronavirus pandemic. White House/Twitter

Reopening the United States is a question of economics.

Choosing the right moment to let Americans resume their routines means weighing the illnesses and deaths that might result from letting people mingle against the financial damage of keeping them apart.

It’s the kind of question economists are well-practiced at answering. And in the weeks since the coronavirus landed in the United States, academics have started producing analyses of when the economic toll of containing the virus might outweigh the harm done by the virus itself.

It’s less clear whether the federal government is doing the same thing. Economists who have served on the White House Council of Economic Advisers in this administration and previous ones are divided over whether formal cost-benefit analyses are likely being done behind the scenes, aimed at informing President Trump’s decision.

Economist Jason Shogren, who served on the White House council under President Clinton, said economists at the White House or the Department of Health and Human Services are bound to be doing that work. "Whether it bubbles up to the top is another matter," he said.

But Casey Mulligan, who spent a year as chief economist with Trump’s Council of Economic Advisers, said that outside of environmental rules the federal government across administrations has failed to follow its own policies about weighing costs.

"How does it get accounted for? People scream," Mulligan said. "I can guarantee you that lots and lots of people are contacting congressmen, contacting the White House directly, saying I want my business open, I want my kids in school. And that is the channel in which these costs might be acknowledged. But not by any calculation."

If government economists are crunching the numbers, Trump may not be listening to them.

On Monday, he declared his "authority is total" to end social distancing, setting up a battle with governors. But he hasn’t said what his decision will be based on.

"The metrics are right here. That’s my metric," he told reporters on Friday, pointing to his head.

Trump’s views are well known. In March, as the stock market extended its losses and unemployment figures soared, he tweeted that "THE CURE CANNOT BE WORSE (by far) THAN THE PROBLEM!"

The president has staked his reelection bid on a strong economy and is determined to protect it. Critics worry that "great business leaders" will outnumber medical experts on the task force he’s establishing to recommend when and how to lift social distancing restrictions.

Meanwhile, economists at a handful of universities have started using established tools to help inform the public discussion about when the U.S. economy should open.

Price of a life

Shogren did one such analysis with University of Wyoming colleagues Linda Thunstrom, David Finnoff, Stephen Newbold and Madison Ashworth. He said the team was initially skeptical that grinding the economy to a halt would be worth the cost. But their research — which has been accepted for publication in the Journal of Benefit-Cost Analysis — convinced them it was.

The best outcome for the economy and for public health, they found, was to bring both the pandemic and the economic lockdown to a close this summer.

"For that to materialize, people need to be willing and able to sustain effective social distancing measures, even in the face of a severe economic contraction," the paper states.

Shogren and his colleagues looked at two scenarios — a business-as-usual one in which no social distancing measures were applied and one where mitigation efforts continued across the United States until the risk had passed.

They used epidemiological models to chart the likely rates of infection and death under both scenarios and factored in projections of overcapacity at hospitals and data from social distancing during the 1918 flu pandemic.

They estimated that doing nothing would cost 1.2 million more U.S. lives than a lockdown that ran the length of the pandemic. And although the hit to the gross domestic product this year and for the next three years of recovery would likely be greater if mitigation measures stayed in place, the bottom line is that social distancing could save the U.S. economy $5.2 trillion over a 30-year horizon.

The most important factor in reaching that conclusion was the value of statistical life, the economic estimate for the price the average American is willing to pay to reduce the likelihood that he or she will die.

It’s a figure the federal government uses regularly in rulemakings on climate change and air quality. It’s drawn from surveys and from data about salaries for jobs with varying degrees of danger. The value is currently around $10 million per life, though it varies slightly by agency.

Paying the price of risk

The value of statistical life monetizes a commodity — life — that otherwise would have no objective value, and would therefore be undervalued compared with consequences that are easier to measure.

"One of the harder things to get our heads wrapped around when we’re doing public policy is how do we think about this risk-money trade-off, given that we live in a world of scarce resources," said Shogren.

So the 1.2 million lives that Shogren and his colleagues found would be lost to COVID-19 absent any mitigation efforts would cost the United States $12.2 trillion. That number far outweighs the hit to GDP of staying at home a few extra months.

The all-or-nothing scenarios Shogren used were viewed as a limitation by other economists, and the paper itself said alternatives should be studied.

Mulligan, the former Trump economist, said the paper seemed to use worst-case scenarios for infection rates and death without using similarly grim inputs for economic damage — especially to Americans employed in sectors where remote work is impossible.

"It’s easy for us to say, ‘Oh, this shutdown thing is worth doing,’ but there are a lot of people out there who are not thrilled at all about this," he said.

Alan Krupnick, a senior fellow with Resources for the Future who served as a senior economist at the White House under Clinton, said it’s not up to Trump to end the shutdown.

"I don’t really think this is the way you should do cost-benefit analysis for that issue. Because the economy is not going to start up even if Trump wanted to start it up tomorrow and gave up on social distancing; people wouldn’t give up on social distancing," Krupnick said. "And things could not start up until we’re on the downside of that hump."

Rather than determining when to reopen the economy, he said, models could help guide how to phase in economic activity while minimizing risk.

Are older lives worth less?

The value of statistical life is a controversial figure, not only because it assigns a monetized value to avoiding risk of death but also because some of its assumptions are open to debate.

For example, it’s applied equally to the death of an octogenarian with cardiovascular disease and to a teenage track star.

Mulligan called its use in the context of COVID-19 a failing.

"We know that this virus is way disproportionately killing people who are nearer to death anyway," he said. "Nearer to death than the average person for which that $10 million would apply."

The value is a mainstay in Clean Air Act rulemakings, where it usually stands in for a rule’s effect limiting — or increasing — emissions of fine particulate pollution linked to respiratory illness and death. EPA assumes the value of life is $9.5 million. Anti-regulatory advocates have long held that benefits from reductions in PM2.5 shouldn’t be counted toward rules for other pollutants, like carbon dioxide.

During President George W. Bush’s first term, EPA proposed adjusting the figure to reflect different values of life for different people. It caused an outcry from AARP, which saw the effort as an insult to older Americans.

Krupnick said the assumption that seniors and disabled people wouldn’t pay as much to avoid risk of death wasn’t supported by the data.

"The idea that people’s preferences are what should guide these choices would not necessarily argue that you should deny sick people and elderly people ventilators versus younger people and healthier people," he said. "An older person might have a very high willingness to pay to live an additional year."

While EPA is required under the Clean Air Act and other laws to complete cost-benefit analyses when promulgating new rules, it’s required to limit pollution at a level that protects public health — not because it’s cost-effective.

Shogren, an environmental economist and member of the team of Intergovernmental Panel on Climate Change scientists and experts who received the Nobel Peace Prize in 2007, said the government should satisfy the same standard in deciding when to lift COVID-19 mitigation restrictions.

‘A death is not a death’

While the U.S. response to COVID-19 has been slow and uneven, it does show that when confronted with a crisis, the American public is prepared to make sacrifices. Goldman Sachs Group Inc. estimated in March that U.S. GDP could fall 6.2% for the year because of the pandemic.

But experts say Americans haven’t shown the same willingness to bear the cost of managing risks like climate change, which also threatens lives. If researchers could survey the public on its willingness to pay to reduce the risk of dying from the coronavirus, Krupnick said, the value of statistical life would likely be higher than $10 million because of the level of dread the public feels for it.

"So a death is not a death," said Krupnick.

Meanwhile, the Trump administration has proposed slashing EPA’s budget by more than a quarter in fiscal 2021, and EPA continues to forgo opportunities to limit pollution that causes death. On Monday, the agency proposed leaving a rule for particulate pollution in place despite warnings from public health experts.

"Risk perception, I think, is really important," said James Hammitt, a professor of economics and decisionmaking at Harvard University’s T.H. Chan School of Public Health. The public is willing to dig deep into its collective pocket to avoid dying of things it doesn’t understand and doesn’t feel it controls, he said.

"So coronavirus fits into that very well," he said.

That’s why after the Fukushima Daiichi nuclear disaster in 2011, countries rushed to abandon their nuclear energy fleets, in some instances turning to coal — which causes soot-related deaths, Hammitt said. Or why after an airplane crash, travelers opt to drive — ignoring statistics about death on the road versus in the air.

When it comes to risk perception, climate change loses, Hammitt said. Not only are its risks sometimes hard to identify because they would have sometimes happened anyway — like storms and droughts — but the worst impacts will occur in the future. And humans are bad at planning for the future, whether it means saving for retirement or cutting emissions.

Mulligan, the former Trump economist, said the cost of the virus lockdown could erode the public’s willingness to tackle climate change.

"There’s a likely scenario here where people say, ‘Wait a second, the cure was worse than the disease,’" he said. "It would be a reasonable reaction, especially if they’re looking out in hindsight and saying, ‘This was overblown.’"