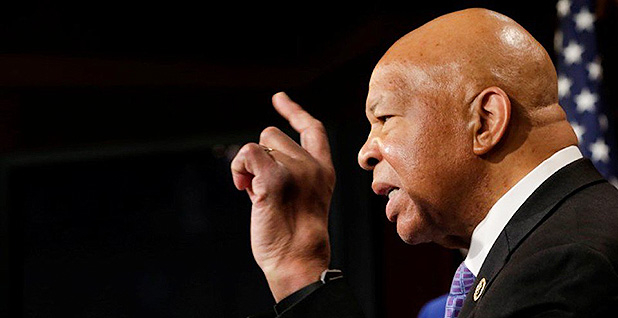 Democrats have been planning their strategy for scrutinizing the Trump administration in the event of a House takeover. Rep. Elijah Cummings (D-Md.) is in line to lead the Oversight and Government Reform Committee. @OversightDems/Twitter

With midterm elections hours away, Democrats on the House Oversight and Government Reform Committee are weighing how and when to use their subpoena power, if their party regains control.

The minority on the committee have privately been sketching out how they plan to use their authority to gather information and put a check on what they describe as waste, fraud and abuse in the administration.

Leading their efforts is ranking member Elijah Cummings (D-Md.), who is widely expected to take over as the committee’s chairman if Democrats are able to flip at least 23 Republican-held seats on Election Day.

He and committee Democrats would then gain control of issuing subpoenas on issues ranging from security clearances for top officials to the child separation policy at the U.S. southern border.

"We need to look at what is being done to dismantle the foundation of our government. We can’t maintain our way of life if we do not have a democracy that is intact and the envy of the world."

A big part of returning to normalcy will be holding the administration accountable, and Democrats cheered the possibility of demanding answers from top leaders.

"Why wouldn’t we use the subpoena as liberally as the Republicans have used it?" said Rep. Gerald Connolly (D-Va.), a senior member of the committee.

He noted that, as current chairman, Rep. Trey Gowdy (R-S.C.) has issued a single subpoena to the administration. That stands in sharp contrast to the 14 subpoenas he issued as chairman of the Benghazi committee during the Obama years.

"I want Democrats to be judicious, but I don’t want them to be shy. By God, we are going to use it," said Connolly.

Cummings has sharply criticized his Republican colleagues for failing to vote on a total of 64 subpoenas drafted by Democrats over the last two years.

"The waste, fraud, and abuse is plain to see — and the Oversight Committee should be using its authority to fulfill its duty under the Constitution to act as an independent check on the Executive Branch. It is time to actually hold the Trump administration accountable to the American people," Cummings said in a statement in September.

The committee is preparing to demand more answers from the administration as the current House minority leader has said the Democratic Party would use its subpoena power "strategically."

"It’s a great arrow to have in our quiver in terms of negotiating on other subjects," Rep. Nancy Pelosi (D-Calif.) told CNN’s Dana Bash on Oct. 22. "What we will do is exercise oversight, which is the responsibility of the Congress of the United States. To exercise oversight over the agencies of government, which this administration has completely walked away from."

Pelosi noted that Democrats would not use their authority to seek impeachment of the president unless there was "a bipartisan, shall we say, inevitability to impeachment."

"It’s not something one party does. But I do think the public has the right to know the truth," she said.

For his part, Cummings has laid out two main tracks for pursuing oversight: close scrutiny of the administration’s top members and ensuring protections for the American public.

Democrats intend to investigate the president’s financial conflicts of interest, the process the administration has used to grant security clearances and a "troubling pattern of politically-motivated attacks" on government watchdogs to career government employees.

Another high priority is reviewing the Trump administration’s decision earlier this year to separate migrant children from their families at the southern border.

The committee is planning to review the Department of Commerce’s plan to add a question about immigration status to the 2020 U.S. Census.

Critics of the proposal warn that including that question could discourage people from participating in the census, which can have wide-ranging impacts on everything from voter representation in the House to allocation of federal resources.

Democrats are also looking to protect the public by investigating issues such as rising prescription drug costs, the affordability of health care and funding to address opioid addiction nationwide.

None of the top priorities of this committee is expressly focused on environmental issues, but Democrats do hope to review ethics scandals of administration officials, including the highly publicized actions of former EPA Administrator Scott Pruitt, who left office in July.

Some specific environmental interests among committee members may also influence their agenda. Although the House Energy and Commerce and Natural Resource panels are expected to take on much of the environmental oversight, Cummings has shown a strong interest in following up on the lead-in-water crisis in Flint, Mich. (E&E Daily, Sept. 6).

Last year, the ranking member sought to subpoena Michigan Gov. Rick Snyder (R) about his knowledge of an outbreak of Legionnaires’ disease that resulted from the water contamination in the state.

Massachusetts Rep. Stephen Lynch (D) is interested in following up on the fatal natural gas explosions in his state this year.

In a statement to E&E News, Lynch noted that the Pipeline and Hazardous Materials Safety Administration estimated there were 650 reported pipeline incidents, leading to the deaths of 20 people and injuries to 35 people.

Lynch said he is hopeful that he will become chairman of the National Security Subcommittee, where he would also be interested in pursuing investigations into ambassadorial vacancies and military conflicts in Syria, Iraq and Afghanistan.

Cummings noted that so far, Republicans under Trump have been acting as "aiders and abetters" of the executive branch.

"My aim is do what I swore to do — uphold the Constitution," he said.