If Perry aims to scrap agency, it won’t be easy 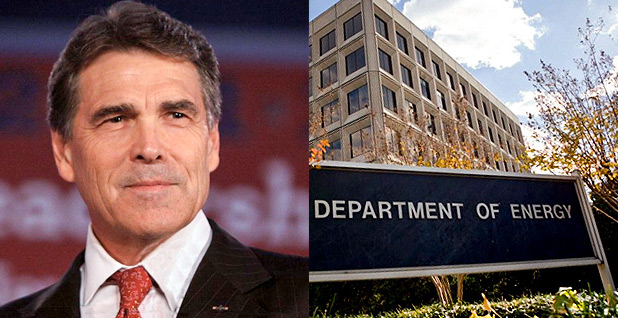 President-elect Donald Trump’s choice of Rick Perry to lead his Department of Energy raises questions about whether the former Texas governor is on a mission to send DOE to the scrap yard.

Trump’s advisers haven’t ruled it out.

"We haven’t made any comments or plans as far as specific agencies," Jason Miller, Trump’s communications director, told MSNBC yesterday in response to a question about whether DOE’s on the chopping block.

Yet sources close to the DOE transition effort said tearing apart DOE — a historical pet cause for conservatives — isn’t likely because the bulk of the department’s budget goes to protecting the U.S. nuclear arsenal and overseeing 17 sprawling labs doing research on, among other things, next-generation supercomputers, mapping the human genome and testing nuclear reactors. A large chunk of DOE’s most recent budget request of $32.5 billion would go to overseeing nuclear weapons, nonproliferation and cleaning up Cold War weapon production sites.

"We’re not going to do away with nuclear weapons; we couldn’t do it in a hurry even if we wanted to," said a former DOE official from the George W. Bush administration. "They’re not going to abolish it overnight."

Perry wouldn’t be the first DOE chief to take office with an eye toward killing or trimming the agency. Former DOE Secretary Spencer Abraham, the source said, sponsored legislation as a senator to abolish DOE but went on to expand the agency’s mission under Bush. The former Michigan Republican senator led the agency from 2001 to 2005.

The Heritage Foundation, which has a heavy hand in Trump’s DOE transition efforts, floated a blueprint in the 1990s providing a step-by-step process for closing down DOE by transferring defense-related programs to the Department of Defense and research to the National Science Foundation.

Other groups like the American Energy Alliance have floated recommendations for gutting the department’s renewable energy research, loan guarantee program, nuclear research and other programs.

But Jeff Navin, co-founder and partner at Boundary Stone Partners, who was deputy chief of staff at DOE during the Obama administration, said shutting down federal agencies including DOE has been tried — and failed — in the past. Navin also questioned whether there’s a desire among the Trump team to scrap the agency and whether the president-elect could shore up enough support in Congress.

"We haven’t seen any indication from Donald Trump that he plans to take the agency down," Navin said. "It’s been tried in the past and failed — and DOE has broad bipartisan support."

Indeed, at least one Senate Republican, Sen. Rob Portman of Ohio, who’s critical to Perry’s confirmation, signaled today he would push back against efforts to scrap DOE jobs.

"No matter who the nominee is for the Department of Energy, Portman isn’t going to stop working on behalf of Piketon and protecting those jobs," said a spokeswoman for the senator, a member of the Senate Energy and Natural Resources Committee.

Energy and Natural Resources Chairwoman Lisa Murkowski of Alaska, who today said a confirmation hearing will be held early next month, praised Perry’s work on energy and pressed the importance of DOE’s approval of energy exports, nuclear power and strategic oil reserves. Perry will need to be approved by a majority of her panel’s 12 Republicans and 10 Democrats before moving to the floor for a vote.

"As a former governor of Texas, Rick recognizes the economic and security benefits of technology innovation and an energy supply that is diverse, reliable and affordable," Murkowski said. "I look forward to meeting with Gov. Perry to discuss a wide range of important issues, including the high cost of energy in Alaska, the United States’ innovation excellence, the future of nuclear energy, [liquefied natural gas] exports and the Strategic Petroleum Reserve."

Senate Majority Leader Mitch McConnell (R-Ky.) joined in the chorus, highlighting the importance of DOE’s research on coal-fired power generation and its ongoing cleanup at a former uranium enrichment site in the western tip of Kentucky.

In an ironic slip of the tongue, Sean Spicer, the Republican National Committee’s communications director, mistakenly referred to Perry as the nominee for the wrong department.

"Unlike the current Education secretary, who negotiated the Iran nuclear deal, Gov. Perry will negotiate deals that advance America’s interest," Spicer said on a call with reporters.

Spicer touted Perry as one of the most successful governors in modern history for leading the Lone Star State through a sustained period of economic growth and prosperity. Perry, he said, will execute Trump’s vision of energy independence, create "millions" of new jobs while protecting the air and water, and roll back red tape to usher in an energy revolution "as he did in Texas."

"He led the nation in Texas in energy creation, exports, produced more wind power than any other state in the union. It’s worth noting that Texas is the only state in the country with its own electric power grid, ERCOT, which was overseen by the governor."