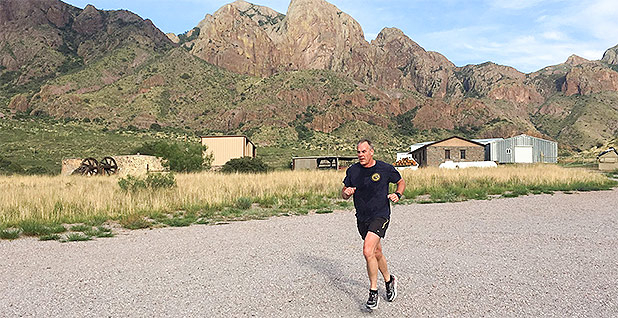 Interior Secretary Ryan Zinke on a run during a stop this week at the Organ Mountains-Desert Peaks National Monument. @SecretaryZinke/Twitter

Critics of the Antiquities Act like to argue that presidents can effectively lock up millions of acres of land or ocean into national monuments with the stroke of a pen — but what exactly will happen if President Trump attempts to erase the work of his predecessors?

The answer is unsurprisingly complex and dependent on a range of factors, including whether Trump will move to eradicate any of the 27 national monuments included in a review underway by Interior Secretary Ryan Zinke.

A final report is not due until Aug. 24, although Zinke has already dismissed three monuments from any changes, suggested he will leave a fourth unaltered and stated recently that he plans to cull from the list before the final deadline (Greenwire, July 24).

But should Zinke call for some monuments to be reduced — as he has already indicated he will endorse for the 1.35-million-acre Bears Ears National Monument in Utah — and the White House executes those recommendations, it would trigger immediate changes on the targeted land, according to several legal observers.

Among the most significant changes for any public lands that lose monument status would be to open those sites immediately to new mining claims.

"Each monument is unique, and so the impacts will likely vary from monument to monument. None of the impacts are going to be good," said Earthjustice attorney Heidi McIntosh.

She added: "Prospectors can once again enter into monument land and begin to prospect for a variety of minerals. In Bears Ears, it would reopen the door to uranium prospecting and mining, an activity that has damaged the land for decades."

While prohibitions on new oil and gas leases would also be lifted on lands that lose monument status, that development could take longer to occur given requirements for environmental assessments and public comment. Master leasing plans that govern some areas could also continue to prohibit oil and gas development.

McIntosh also noted that former monument lands would be removed from the Bureau of Land Management’s National Conservation Lands program, which aims to conserve and protect wilderness areas, conservation areas, monuments and other public lands with cultural, ecological or scientific values.

"The land managers are going to go back to treating these really spectacular places as if they were just garden-variety public lands with no special attributes," McIntosh asserted.

Former Interior Department Deputy Solicitor for Land Resources Justin Pidot, who is now an associate professor at the University of Denver Sturm College of Law, also warned that altering the status of newer monuments — those which have yet to finalize their own management plans — could erase prohibitions on activities like fishing in certain marine monuments.

Pidot pointed to the 3-million-acre Northeast Canyons and Seamounts Marine National Monument, established in 2016 off the New England coast, as an example.

"The only limitation on activities in that area are through the text of the proclamation itself, so all of those limits would be lifted," he said.

Boundary changes could also lead to confusion in established monuments, as federal agencies determine how to realign management plans to address lands that have reverted to a previous status.

While such changes are feasible given time, should the Trump administration move to execute changes immediately in the wake of Zinke’s recommendations, it could leave some public lands in limbo.

"You’d be in a situation where you have no rules whatsoever for the management of those lands," Pidot warned.

An Interior Department spokeswoman referred inquires about when Trump could act on the August report to the White House.

A White House spokesperson noted that the Trump administration does not comment on legal advice, adding: "Once the president receives the report from Secretary Zinke, he will consider its recommendations and determine the best path forward."

But even with a waiting period of sorts between any recommended changes and their actual execution, Pidot suggested that confusion could lead to incidents like illegal off-road vehicle use or other activity on potentially sensitive lands.

"There may be a disconnect between what is the legal reality and what people will expect because they’ll see the triumphalism of Trump slashing away a monument and think now these lands are up for any use we want, but it probably won’t be true," he added.

Barring the least likely of conclusions — in which Zinke opts not to recommend changes to any of the sites under assessment — Pidot said there is one certainty about the outcome of the review: "There’s going to be some litigation almost no matter what the outcome is here."

That’s in part because if Zinke advises the president to erase any of the national monuments, Trump could become the first chief executive to attempt to undo a designation made by one of his predecessors.

Republicans and Democrats on Capitol Hill have split over whether the Antiquities Act of 1906 gives the president the ability both to create and dismantle monuments, or whether only Congress can unravel a monument once it has been created (E&E News PM, March 29).

Although past presidents have reduced the size of some monuments, no White House occupant has done so since President Kennedy modified the boundaries of the Bandelier National Monument in New Mexico in 1963.

Conservationists point to the Federal Land Policy and Management Act, created in 1976, for the end to that practice, asserting that the law eliminated the president’s ability to reduce a monument’s boundaries.

Challenges to the White House would likely rely, at least in part, on the 1938 opinion issued by then-Attorney General Homer Cummings to President Franklin Roosevelt.

Pidot said that should Trump attempt to abolish a monument, he would need to seek a new opinion from the Justice Department’s Office of Legal Counsel (OLC), or at least a new memo withdrawing Cummings’ stated position.

A Justice Department spokeswoman did not respond to a request for comment on whether the OLC will produce a new opinion on the president’s powers under the Antiquities Act.