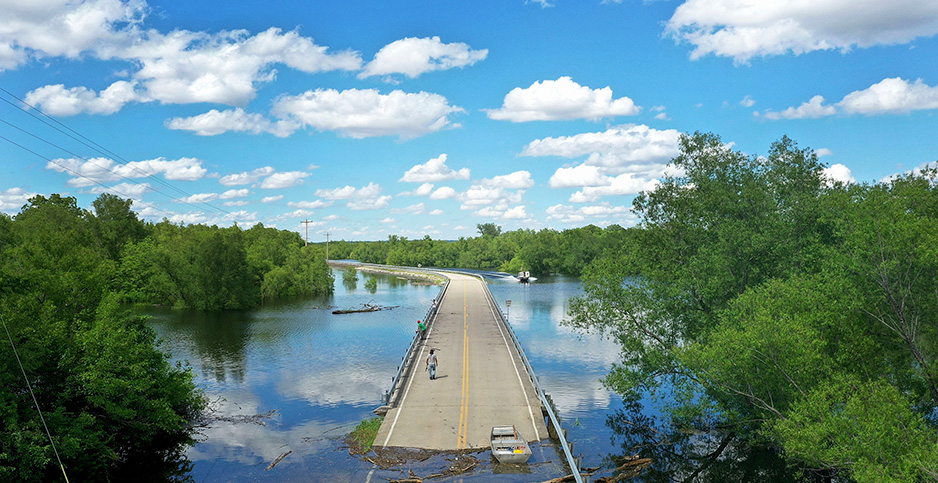 Floodwater cuts off a Missouri road at the Illinois border in 2019. Scott Olson/Getty Images)

More than 20 years ago, Congress and President Clinton enacted a law that aimed to encourage local governments to make their infrastructure more resilient to natural hazards and climate disasters.

But there was a catch: The Federal Emergency Management Agency was supposed to enforce the law by penalizing states and municipalities when they sought aid for facilities that had been damaged in previous disasters.

FEMA never did that.

A new federal investigation finds that FEMA has failed to write regulations that were required under the 2000 law — and that at least $2 billion in federal taxpayer money has been spent repairing disaster-damaged roads, bridges and public buildings that should have been strengthened.

FEMA “has not prioritized compliance” with the 2000 law, the Department of Homeland Security inspector general wrote in a report last week that urged the agency to draft and adopt the required regulations.

FEMA said it had been focusing on “the immediate needs of disaster operations” since 2000 but agreed with the report and vowed to complete the required task. FEMA is part of the Department of Homeland Security.

The inspector general’s report draws attention to an issue that’s gaining urgency as climate change intensifies the damage caused by storms, flooding and wildfires. The cost of repairing property that is repeatedly damaged is rising.

FEMA has for decades prioritized mitigating homes that are flooded repetitively and has given states and municipalities billions of dollars to demolish, move or elevate those houses.

But FEMA has not shown the same urgency with repeatedly damaged roads, bridges and public buildings.

The 2000 federal disaster law required FEMA to create an incentive for local agencies to strengthen infrastructure and directed FEMA to do so through its distribution of federal funds that help states and communities rebuild disaster-damaged public facilities.

FEMA pays for at least 75% of disaster repairs. The law directed FEMA to cut that reimbursement to 25% for facilities and infrastructure that had been previously damaged in a disaster.

The law, the Disaster Mitigation Act of 2000, said the penalty would apply to facilities that had been damaged at least twice in a preceding 10-year period and when the owner “failed to implement appropriate mitigation measures to address the hazard that caused the damage.”

FEMA took initial steps to follow the law by publishing proposed rules in 2009 that explained how the agency would enforce the requirement.

The proposal raised concerns from groups such as the National League of Cities and the National Emergency Management Association, which said in comments to FEMA in 2009 that the proposed policy could unfairly penalize communities.

The inspector general found that from 2009 to 2018, FEMA gave states and localities $1.9 billion in federal taxpayer money to rebuild roads and bridges that had been repeatedly damaged. In one instance, a local government received $4.6 million to repair roads and bridges that sustained identical damage during seven separate disasters. The report didn’t identify the community.

FEMA sent states roughly $115 billion in disaster relief from 2009 to 2018, including roughly $60 billion in 2017 and 2018 after powerful hurricanes devastated Puerto Rico, Florida, the Virgin Islands and southeast Texas.

If FEMA continues to fail to implement the 2000 law, the agency will be unable to urge states “to prevent or reduce repetitive damages, which will likely increase the federal costs of disaster assistance,” the inspector general found.