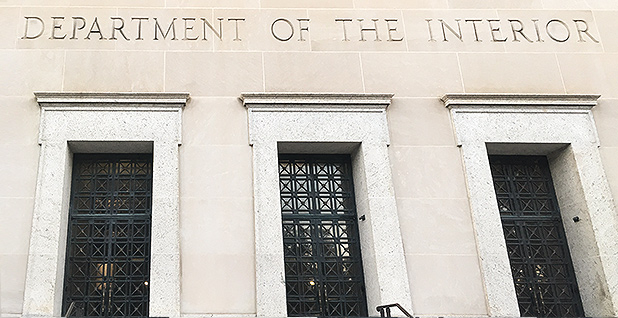 The Interior Department’s controversial reassignments of senior staffers last year were poorly documented and left some officials in the dark, the Office of Inspector General has concluded.

In a long-awaited report, the internal watchdog said Interior’s opaque handling of the Senior Executive Service transfers complicated efforts to assess the moves, which were made by the department’s Executive Resources Board.

"The ERB did not document its plan or the reasons it used when selecting senior executives for reassignment, nor did it gather the information needed to make informed decisions about the reassignments," the IG’s 30-page report noted.

Pointedly, the IG added that "the ERB did not communicate the decisions made with the SES corps or with most managers affected by the reassignments."

The transfers, moreover, alarmed some of Interior’s most experienced professionals.

But "absent documentation," the IG explained, investigators could not determine whether Interior complied with the federal law governing administration of the SES.

Meetings about the reassignments "did not have meeting minutes, notes, voting or decision records, or other documentation for these meetings … other than photographs of poster boards," the IG found.

Interviews weren’t much help, either.

"We only received broad explanations of reassigning senior executives," the IG stated.

The IG made a number of recommendations, some of which Interior’s leadership agreed to.

"I continue to believe the actions taken by the ERB and covered in the [IG report] are lawful," Deputy Interior Secretary David Bernhardt wrote in response. He added that "I have communicated to our SES employees that we will continue to use SES reassignments robustly as a management tool."

Interior spokeswoman Heather Swift added, "Obviously, the evaluation confirmed the department’s long-held view that the ERB has the lawful authority to reassign SES members and has done so here. Additionally, the department appreciates the IG making recommendations on the board’s effectiveness. As outlined by the deputy secretary in his response to the IG, the ERB has already adopted and is implementing best practices and has moved aggressively to better communicate its vision and plan going forward."

Last July, Sen. Maria Cantwell (D-Wash.) and seven Senate Energy and Natural Resources Committee colleagues urged the IG to scrutinize what they called "reports of the arbitrary reassignment of as many as 50 Senior Executive Service employees" (E&E Daily, July 25, 2017).

The reassigned SES staffers included the Bureau of Land Management state directors in Colorado, Alaska and New Mexico, as well as many others.

There were 7,794 SES members among all federal departments, as of a 2014 count by the Office of Personnel Management. Interior’s SES members include the superintendents of major national parks and the BLM state directors who oversee vast stretches of public land.

The SES employees are selected through a competitive process and receive higher pay but are also subject to being involuntarily transferred. They can either accept the reassignment or resign, or they can appeal if they think it was the result of discrimination or a prohibited personnel practice.

"Senior executives are the highest paid employees in the federal government and signed up for the SES knowing that they could be called upon to work in different positions at any time," Interior noted in a statement last year (Greenwire, Sept. 11, 2017).

They also included former climate policy adviser Joel Clement, who subsequently alleged he was reassigned and "retaliated against for speaking out publicly" about the dangers posed by climate change.

Clement has filed a whistleblower complaint with the Office of Special Counsel, which is a separate agency outside of Interior (Greenwire, Sept. 21, 2017).

"I am stunned by the level of incompetence that this report describes; there were so few records kept that the Inspector General can’t even make a determination of the legality of the reassignment actions," Clement said in a statement. "It’s remarkable that the political staff at Interior would be so blithe, thoughtless, and careless during a time of intense scrutiny."

According to the new report, Interior Secretary Ryan Zinke on May 19, 2017, formed an ERB to oversee the management of SES resources. On June 2, the ERB held its first meeting and decided on 34 senior executive reassignments; the ERB later added one reassignment.

Twenty-seven of the 35 senior executives who received reassignment notifications were actually reassigned. Of the remaining eight, three resigned, three had their reassignments rescinded and two stayed in position pending their retirement.

Eleven of the selected SES staffers had worked in their current position for less than two years, and one had been in the position less than eight months.