IG looking into why senior staffers were moved 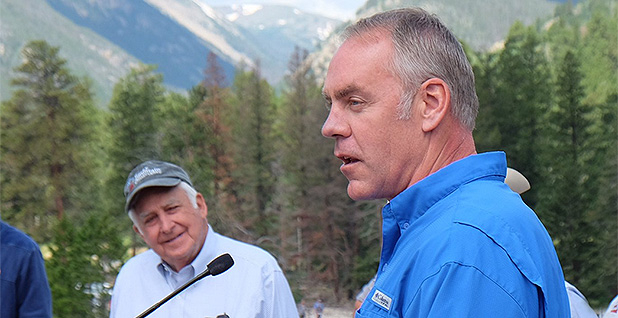 The Interior Department's Office of Inspector General is examining the department’s reassignment of senior executives under Secretary Ryan Zinke. @SecretaryZinke/Twitter

The Interior Department’s Office of Inspector General is in the midst of examining the department’s politically sensitive reassignment of top officials, the watchdog agency confirmed today.

The inquiry, one of several underway into the actions of Interior’s leadership, is focusing on the transfers earlier this year of high-level Senior Executive Service career staff into new positions.

"We are looking into the SES moves," Nancy DiPaolo, the IG’s director of external affairs, said in an email today, adding that "an OIG audit team is conducting interviews and will be analyzing documents that we’ve requested from the department."

The reassigned SES staffers included the Bureau of Land Management state directors in Colorado, Alaska and New Mexico as well as dozens of others. They included former climate policy adviser Joel Clement, who subsequently wrote in The Washington Post that he believes he was reassigned and "retaliated against for speaking out publicly" about the dangers posed by climate change (Greenwire, Aug. 21).

Clement has filed a whistleblower’s complaint with the Office of Special Counsel, which is a separate agency outside of Interior.

"Mr. Clement’s [situation] is being handled by OSC," DiPaolo said.

"Personnel moves among the [SES] are being conducted to better serve the taxpayer and the Department’s operations," the department said in a statement today.

The IG’s interviews and document analysis mark progress from last month, when Deputy Inspector General Mary Kendall first wrote eight Senate Democrats on Aug. 3 that "the OIG is conducting an initial review of the methodology and criteria used to reassign executives."

The eight Democrats, all members of the Senate Energy and Natural Resources Committee, had asked the IG to look into Interior reassignments July 24 (E&E Daily, July 25).

The lawmakers, led by committee ranking member Maria Cantwell (D-Wash.), declared in their letter that "any suggestion that the department is reassigning SES employees to force them to resign, to silence their voices, or to punish them for the conscientious performance of their public duties is extremely troubling."

There were 7,794 SES members among all federal departments as of a 2014 count by the Office of Personnel Management. Interior’s SES members include some high-profile individuals such as the superintendents of major national parks and the BLM state directors who oversee vast stretches of public land.

The SES employees are selected through a competitive process and receive a salary bump but are also subject to being involuntarily transferred. They can either accept the reassignment or resign, or they can appeal if they think it was the result of discrimination or a prohibited personnel practice.

"Senior executives are the highest paid employees in the federal government and signed up for the SES knowing that they could be called upon to work in different positions at any time," Interior reiterated in its statement today.

The IG inquiry is not the only examination underway at the behest of congressional Democrats.

The GAO probe followed the Office of Inspector General’s decision last week to drop an inquiry into the phone calls that it deemed "unproductive" after Murkowski and Republican Sen. Dan Sullivan of Alaska showed no interest in talking with investigators.