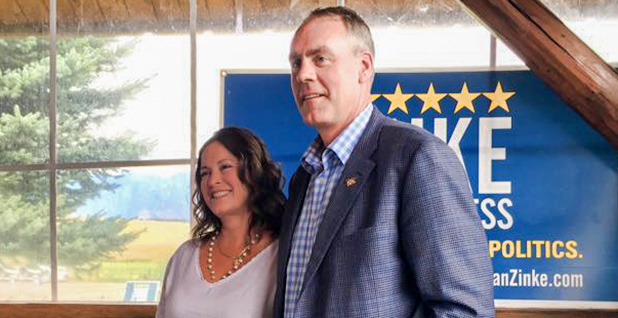 The report reveals that Zinke clashed with staff over designating his wife a volunteer, which could have allowed her to travel on official trips for free.

It also shows that Zinke invited campaign supporters onto a government boat to tour the Channel Islands National Park, under the pretext that they were "stakeholders" who would provide a "direct service" to the trip.

Two people on the boat had hosted a fundraiser for Zinke’s 2014 congressional campaign, according to the report. Zinke’s wife and one of her family members also took the boat ride.

Zinke said the guest list came from former Rep. Robert Lagomarsino (R-Calif.), for whom the park’s visitor center is named. He added that ethics staff members knew about the campaign supporters, but he didn’t remember telling them about it. Ethics staff members said they hadn’t known.

Zinke said it was "immaterial" whether he had told anyone that his guests had raised money for him, according to the report.

The IG report, which was sent to Congress but not yet published, was leaked hours after the department tamped down reports that Zinke was replacing the longtime acting inspector general with an inexperienced political operative.

Zinke is also facing a probe into business dealings with a Halliburton Co. executive, along with three other open IG investigations, according to the Center for Western Priorities.

Investigators found that Zinke asked his employees to research the legal and ethical implications of making his wife, Lolita, a volunteer.

After a news report about Lolita Zinke traveling with her husband, Ryan Zinke told Daniel Jorjani — now the department’s top lawyer on an acting basis — to tell the media that she was the department’s ombudsman, according to an ethics official’s notes of the meeting.

Jorjani told Zinke he couldn’t say that, according to the report.

Zinke denied to investigators that he wanted to designate his wife a volunteer so she could travel with him for free. But others said that was exactly why.

Two of the ethics officials involved in the discussions, Ed McDonnell and Melinda Loftin, said they had raised concerns about it but continued to feel pressure from senior staff.

"We’re spending taxpayer dollars trying to figure out if she can be a volunteer so that he [Zinke] doesn’t have to pay [reimbursement for her travel]," McDonnell said.

Zinke said the request cleared legal and ethics hurdles, but they decided against it because the optics weren’t good.

The report suggests that top-level staffers went along with Zinke’s decision to let his wife ride with him in government vehicles.

David Bernhardt, the department’s No. 2 official, said Interior’s policy against family using government vehicles applied to regular employees but not to the Zinkes.

It was a policy that Zinke could change "with the stroke of a pen," Bernhardt said, according to the report.

Jorjani, the acting solicitor, said Lolita Zinke’s presence in official cars was appropriate, because Ryan Zinke has to travel in government vehicles. This was the only way for his wife to accompany him, he said.

Zinke said his wife never traveled in a secure vehicle without him.

The IG found that the Zinkes reimbursed the government for all vehicle travel. Investigators also found a reimbursement agreement from the White House for a $15,000 trip on Air Force One, but they couldn’t tell whether that covered both the secretary and his wife.

Zinke said President Trump had personally invited his wife onto the flight to Atlanta.

An unarmed security detail from the U.S. Park Police accompanied Zinke and his wife on their August 2017 vacation to Turkey. It cost over $25,000 for four officers.

A Park Police supervisor said she learned about the vacation when Zinke asked whether it would be safe for him to travel through Istanbul. After deciding it could be dangerous because of past terrorist attacks, the Park Police asked the State Department for help. State declined to offer any resources because it was an unofficial trip, but it did recommend a car service.

Zinke didn’t ask for the security, but he said it wasn’t his place to turn it down.

"I tend not to tell them what to do," he said. Asked what good they would be without firearms, he said that in his experience, "oftentimes you don’t need a gun."