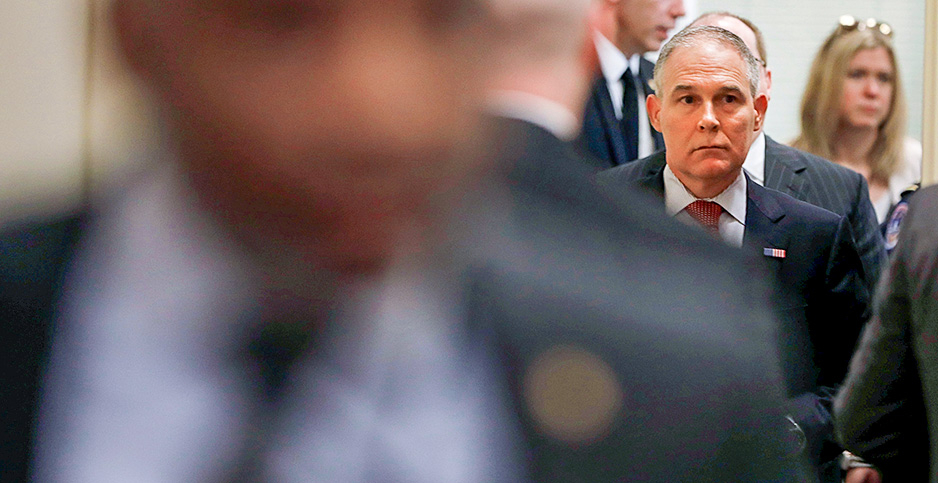 The contingent of security guards protecting the EPA administrator more than tripled under Scott Pruitt’s watch, according to a report released today by the EPA inspector general.

The report — one of the first to focus on Pruitt, who resigned in July after an onslaught of allegations of overspending and mismanagement — detailed auditors’ struggles to obtain the paperwork behind the decisions that led to 24/7 protection for the former EPA chief.

In a podcast accompanying the report, Jean Bloom of the EPA Office of Inspector General’s audit and evaluation office said the agency hasn’t provided documentation on why Pruitt had to have around-the-clock security. She noted that EPA responded with a memo drafted in August 2017 summarizing threat investigations related to Pruitt, but that came long after President Trump’s transition team had asked in February last year for the boosted security for Pruitt on a temporary basis.

"The OIG report was prepared almost six months after the decision to increase protection was made. The agency never provided the audit team with documentation of the decision or justification to continue the 24-hour/seven-day-a-week protection beyond the initial two-week period," Bloom said.

Don Benton, formerly EPA’s senior White House adviser, had warned in an email that around-the-clock protection for Pruitt would be "very costly" and drain enforcement funds. Benton’s email came when the increased protection was deemed permanent.

Greater security for Pruitt resulted in greater costs for the agency.

The IG found that costs for the EPA administrator’s protective service detail more than doubled under Pruitt when compared with Gina McCarthy, his Obama-era predecessor. Overall, EPA spent more than $3.5 million on the detail from Feb. 1 to Dec. 31 last year, compared with more than $1.6 million from March 1, 2016, to Jan. 31, 2017.

The increased security spending for Pruitt’s detail included greater travel costs as well. EPA spent $739,580 on the agents’ travel, which included first-class trips — a 216 percent increase over the prior period.

In addition, McCarthy’s detail was providing "portal-to-portal" or door-to-door security for her with six agents. Pruitt’s detail had 19 agents to provide 24/7 security.

The detail lacked standard operating procedures, and its actions were based on management decisions rather than a threat analysis, according to the report.

An EPA spokesman took issue with that conclusion, saying other factors were in play regarding the agency’s security, including the shootings involving the Republican congressional baseball team and former Rep. Gabby Giffords (D-Ariz.).

"A threat analysis cannot be the sole source of information used to determine if protective services are provided or the level of protection," said the spokesman.

"Accordingly, there is no support for the OIG’s insinuation that expenditures for protective services carried out before a threat analysis was conducted were not justified."

In EPA’s initial response this June to the report, it said that level of protection went on because of "continued risks and specific threats." The IG said the decisions behind those moves could not be documented.

The IG also spent a year asking for documentation behind EPA’s legal authority to provide protection for the administrator.

In response to the draft report, EPA provided a memo dated this June from the Office of General Counsel. It concluded that the agency’s law enforcement authority to investigate environmental crimes was broad enough to have its agents provide security for the EPA chief.

The review also discovered problems with overtime pay for the detail’s agents, as laid out in an earlier September 2017 management alert.

The IG found EPA did not have the proper authorization for the security agents’ overtime requests. That led to $106,507 of overtime payments for the detail without the correct approval.

The detail also didn’t properly record what overtime hours its agents worked. Pruitt’s having 24/7 protection resulted in complex work schedules involving being on duty over weekends and nights, according to the IG.

The report also noted that the now-acting EPA administrator, Andrew Wheeler, requested about a week into his tenure that around-the-clock protection be eliminated and be replaced with door-to-door security, which is what administrators have had traditionally.

The audit began before Pruitt’s arrival at the agency.

In 2016, the IG received a hotline complaint that the agents on the administrator’s protective service detail weren’t working their shifts to receive overtime pay. The IG would soon expand the audit in 2017.

EPA took issue with several aspects of the IG’s report, as detailed in two different responses from the agency.

EPA did agree with some of the IG’s recommendations, including providing regular threat analyses for the administrator as well as reviewing controls on pay caps and recovering any overpayments, according to the agency spokesman. Yet the IG made 12 recommendations, and only four have been given planned completion dates, leaving eight unresolved.

The IG is also working on another report related to security. The agency watchdog is covering problems it found with Law Enforcement Availability Pay, or overtime pay for law enforcement officers, in a separate audit.

The inspector general will also release other reviews that center on Pruitt. Those include reports on his travel as well as his and other top officials’ use of the special hiring authority under the Safe Drinking Water Act that resulted in significant pay raises for close aides to Pruitt, which were later reversed.