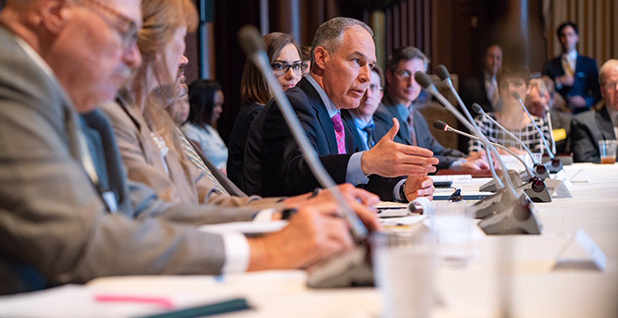 EPA’s internal watchdog said it will probe Administrator Scott Pruitt’s use of multiple email accounts at the agency.

The IG will also check whether all the email accounts were searched in response to Freedom of Information Act requests to the agency.

"We have determined that the issues raised in your letter are within the authority of the OIG to review, and we will do so," Elkins said in the May 2 letters.

Elkins noted that his office is under budget constraints, which limits what work it can choose to do. The IG also said his staff has "numerous other pending matters" and could not say when the review of Pruitt’s email accounts would begin.

"We will inform you and your staff when we have begun the project, and will provide with the results as soon as we finish," Elkins said.

Elkins was responding to a letter sent last month from Carper, the ranking member of the Senate Environment and Public Works Committee that oversees EPA, and Merkley, who also sits on the EPW panel, that raised concerns about Pruitt’s email accounts.

Sen. John Barrasso (R-Wyo.), the committee’s chairman, also had questions about the EPA chief’s email practices in his own letter sent to the agency.

Pruitt has been assigned four email accounts, including one set up for internal daily communications that he never used. EPA has said that all his email accounts have been searched in response to FOIA requests and congressional inquiries, but the agency is also conducting its own review (E&E Daily, April 20).

Top EPA officials’ use of alias email accounts has been common since the Clinton administration. The secondary accounts, their addresses kept hidden from the public, are used so officials’ inboxes do not become flooded with messages.

Investigations into Pruitt and his aides have piled up at EPA, including by the inspector general. The IG is also looking into several other issues, including Pruitt’s travel, spending on his personal security detail and the use of a special hiring authority under the Safe Drinking Water Act that resulted in substantial pay raises for some of his top aides.

Many Democrats have pushed for Pruitt to resign or be fired from EPA in recent weeks. They have sought to keep up the pressure on the agency boss.

Yesterday, Rep. Ben Ray Luján (D-N.M.) sent a letter to Pruitt asking several questions about his domestic and international travel. In the Senate, Democrats on the EPW Committee in a letter last week called for a hearing for Pruitt to address various ethics allegations.

Barrasso in a letter yesterday responded that he does plan to have Pruitt before the panel a second time in 2018. The EPA chief testified at an EPW Committee hearing earlier this year, on Jan. 30.

Pruitt is also set to appear at a congressional hearing today when he testifies before a Senate Appropriations subcommittee.

Barrasso said the IG, the Government Accountability Office and others are reviewing many of the issues Democrats raised in their letter.

"Rather than re-litigating the same issues that other committees have recently addressed, I think that it would be more useful to wait until we have all the facts," said the chairman.

Some Republican lawmakers’ private frustration with Pruitt has bubbled into the open — albeit for different reasons from their Democratic counterparts. Sen. Chuck Grassley (R-Iowa) said yesterday that he would call on Pruitt to resign if the EPA chief kept giving refiners renewable fuel waivers (E&E News PM, May 15).

"They better, or I’m going to be calling on Pruitt to resign," Grassley told reporters.

The administrator will be before Senate appropriators this morning for a hearing on his agency’s budget, but also the recent controversies.

One of Pruitt’s top allies on Capitol Hill, Sen. Jim Inhofe (R-Okla.), said yesterday he hadn’t spoken with the administrator for a month. Still, he thought Pruitt was holding up well under the onslaught of ethics allegations.

Asked whether that storm is over, the Republican senator sounded a warning note for Pruitt.

"Storms are never over, they always come back in Washington."