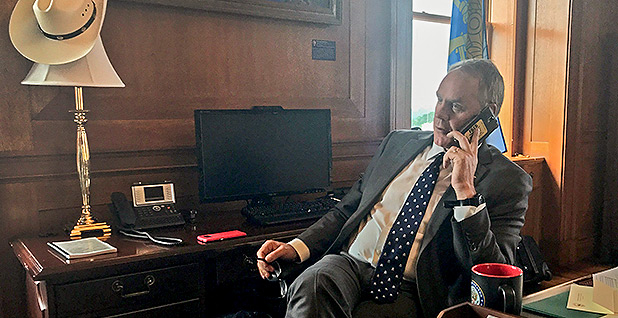 Former Interior Secretary Ryan Zinke’s alleged use of private email to conduct public business is now part of a criminal investigation by a newly unified Justice Department and Office of Inspector General team, officials have revealed.

The two lawmakers in an April 2018 letter had initially requested the OIG investigation into Zinke’s use of private email. At the time, House Democrats were still in the minority.

Copies of emails obtained under the Freedom of Information Act revealed "many instances" in which Zinke used his personal account to send and receive messages involving official business, the two Democrats stated.

Several of the examples cited in their complaint were emails sent by Zinke’s scheduler to his personal account, as well as an official Interior Department account whose full address is redacted.

The Presidential and Federal Records Act Amendments of 2014 require agency officials who conduct official business on nongovernment email accounts to provide copies to the government account. Among other things, the law states that "intentional violation … shall be a basis for disciplinary action."

Federal law further prohibits the "unlawful removal or destruction of records." Violations can result in fines, imprisonment or both.

"Transparency is the foundation of our democracy," Cummings said in a statement. "The American people have a right to know who has access to the highest levels of the Department of Interior."

Grijalva added that "this investigation and others like it are part of restoring public trust in government, which has suffered from the intentional destruction of the Trump years."

Officially, the Justice Department does not publicly discuss or even acknowledge ongoing investigations.

Grijalva and Cummings, though, cited prior anonymously sourced accounts in The New York Times and The Washington Post that said DOJ was investigating allegations that Zinke lied to investigators about the construction of a casino in Connecticut, and that it was also examining a property development deal in his hometown of Whitefish, Mont. (Greenwire, Feb. 25).

In an interview with Bloomberg last week, Zinke disputed what he called "false allegations" and reportedly declared he had been exonerated.

"There was no substance; there never was," Zinke said, according to Bloomberg.