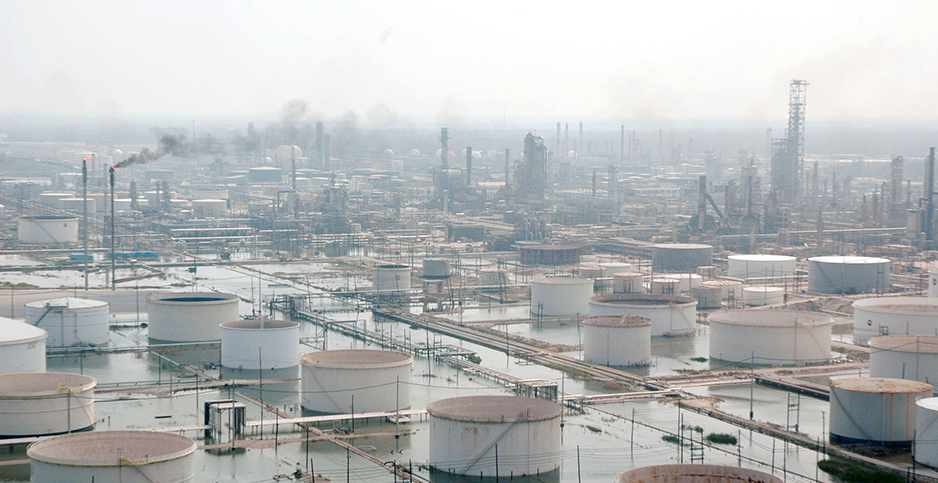 An oil refinery in Port Arthur, Texas, is surrounded by floodwater after Hurricane Rita in 2005. The city is one of the most polluted communities in the United States. Tim Johnson/Reuters/Newscom

Biden unveiled a White House Environmental Justice Interagency Council this week to "ensure a whole-of-government approach to addressing current and historical environmental injustices," according to a sweeping executive order on global warming.

The Biden directive set a goal of delivering 40% of federal climate investments to disadvantaged communities.

"This is a new day, and we’re really, really super excited about Biden and [Vice President] Kamala [Harris] being in office," said Hilton Kelley, founder and director of the Community In-Power and Development Association in Port Arthur, Texas, home to the largest oil refinery in North America.

"Finally, it looks like we’re going to get some traction and we’re getting some real regulations in place to help protect human health and the environment," he added.

The EJ movement gained strength after the killing of George Floyd triggered protests across the county. Black Lives Matter and other groups filled city streets demanding a racial reckoning and acknowledgement of systemic discrimination.

"This moment that we’re in with Black Lives Matter and the increasing political power that communities of color have, all of that is creating more opportunities to have policy reflect the lived experience of communities of color on the front lines of pollution," said Carolyn Farrell, executive director of the Center on Race, Poverty and the Environment.

Biden’s executive action does not carry the weight of legislation. To accomplish some of Biden’s climate objectives, including investments in disadvantaged communities, he’ll likely need Congress, and skeptical Republicans, to allocate money. EJ groups and their allies also will have to go up against the oil industry and others who typically fight climate regulations.

Advocates also cheered the appointment of Maggie Thomas as Biden’s chief of staff for the Office of Domestic Climate Policy. She previously helped develop the goal to be carbon-free by 2035 as political director of Evergreen Action, a San Francisco-based advocacy group (Climatewire, Jan. 21).

Naming Cecilia Martinez as senior director for environmental justice at the White House Council on Environmental Quality was "a huge win" for EJ interests, said Stephanie Gidigbi Jenkins, director of policy and partnership at the Natural Resources Defense Council. Martinez during the presidential race served on Biden’s climate engagement advisory council and acted as a key climate surrogate to EJ groups (Energywire, Jan. 14).

Then there was the high-profile appointment that didn’t happen. When Biden started eyeing potential picks for EPA administrator, more than 70 EJ representatives signed a letter criticizing Mary Nichols, who was then chair of the California Air Resources Board.

Nichols is known as the "queen of green" in California for her efforts to fight climate change. But the letter from EJ groups to Biden’s transition team described her as "not fit to lead an EPA that values environmental justice."

It said she had long ignored EJ recommendations and talked down to EJ advocates. Biden ultimately picked North Carolina Department of Environmental Quality Secretary Michael Regan for the post.

Biden’s press team didn’t respond to questions on whether the letter affected the decision to pass over Nichols. But to some justice advocates, the message was clear: Their influence was growing.

"It will be harder to discount us because of the organizing power that we have," said Martha Dina Argüello, executive director of Physicians for Social Responsibility and a member of the California Air Resources Board’s Global Warming Environmental Justice Advisory Committee. "The organizing power is being acknowledged because we wrote this letter and it had an impact."

Nichols, who retired from the California agency in December, disputed the idea that the letter derailed her EPA nomination.

"Despite the fact that they wrote the letter and got a lot of coverage for it, there is no evidence that their targeting me personally somehow took me out of the EPA job," Nichols said to E&E News in an email. "It is much more likely that the appointment of Gina McCarthy (whose resume and demographic profile are nearly identical) as White House climate coordinator meant that they needed to ‘balance’ the EPA Administrator position to meet their overall diversity goals."

Regan, whom Biden nominated as EPA administrator last month, is a 44-year-old Black man from Goldsboro, N.C., a city with a long history of racial and environmental injustice (Climatewire, Jan. 22). Nichols, 75, is white.

Supporters of Nichols said that if she had been nominated as the head of EPA, it would have benefited EJ groups. Nichols in her email said, "From a political and policy perspective, equity must be at the core of any successful climate protection plan."

Cha added that there’s been a "coalescing … from climate groups around the idea that climate policy has to include justice and equity. That’s a pretty big shift since the last big push" for climate action in the Obama administration.

"You’re not going to get successful climate policy without taking environmental justice concerns into play," she said. "You need a big coalition to pass these things, so the more people you include, the bigger and stronger your coalition is."

The environmental justice movement doesn’t have a central policy platform. One of its beliefs is that each group speaks for itself. But there’s general agreement among EJ groups that regulations are favorable over a carbon tax or cap-and-trade program.

It needs "to be attached to some kind of action," Cha said, such as a rule reducing pollution in those affected communities.

"The targeted investments and the pollution reduction, understanding and addressing them, those two things would be huge," Cha said.

But others are less confident that Biden — or any president — will tackle historical injustices felt by communities of color.

Taylor Thomas, co-executive director of East Yard Communities for Environmental Justice in Southern California, said she’s hopeful that EJ groups will get help from the Biden administration. But she fears politics will get in the way of campaign promises.

"Elected officials will make promises, and then other things will come into play, other political parties, promises to different groups," Taylor said.