‘I’m not expecting them to recover soon, or ever’ after floods 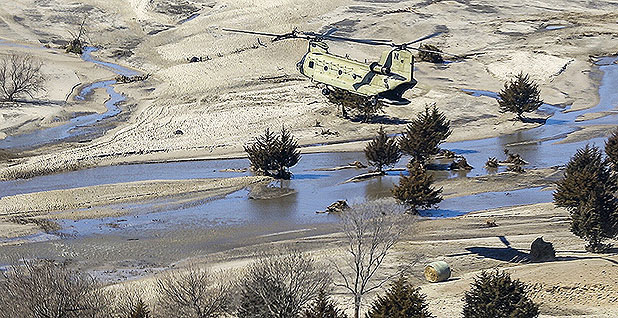 Historic Midwest flooding that has busted levees, inundated homes and claimed at least three people’s lives could cost farmers billions of dollars in lost crops and livestock — and the aftertaste of the disaster could linger for years.

Inundated cropland — tens of thousands of acres’ worth across Nebraska, Iowa and Missouri — is likely to remain less productive, thanks to compaction and loss of nutrients and oxygen. In some areas, farmers may not plant crops like corn and soybeans again for a generation, agriculture experts said.

"A lot of them have lost the topsoil completely," said John Winkler, general manager of the Papio-Missouri River Natural Resources District in Nebraska. "I’m not expecting them to recover soon, or ever."

The Missouri River swelled following heavy rains and snowmelt earlier this month. The flooding has killed three people, damaged thousands of homes and toppled more than a dozen levees in Nebraska, Iowa and Missouri. In Missouri, the river is expected to crest tomorrow in St. Joseph at the third-highest flood level on record.

In places on the edges of the worst flooding, conservation measures such as reduced tillage and planting of cover crops that hold the soil in place were helpful, Winkler said. But the flooding was unprecedented and came at the perfect time of year to have the biggest impact — when the ground was frozen and couldn’t absorb the water — and overwhelmed conservation measures in many areas.

Heavy snow fell in some areas, followed by heavy rain.

"If I were to create a flood, these were the ideal conditions to do it," Winkler said.

The most severe damage to agriculture has been in Nebraska, Missouri and Iowa, with some hardship in Kansas as well. Billions of dollars in losses are likely; in Nebraska alone, officials estimate the damage at more than $1 billion, including $400 million to livestock, $500 million to crops and hundreds of millions more in damaged roads and bridges — figures that don’t include damage to barns or other facilities on farms.

The floods came as farmers were beginning to look toward planting season in about a month. High water will linger, forecasters say, fed by continued melting of snow and ice; in some places, river ice was 20 inches thick, Winkler said.

Rising water deposited sand and debris, including trees and other material, across the flood zone.

"Concrete washed up into farmland areas," said Steve Nelson, president of the Nebraska Farm Bureau. "It’s not just a matter of going in and picking up a few small things."

Farmers in some areas will move soil with heavy equipment to level out their fields, said Jack Boyer, a regional director with the Conservation Districts of Iowa. And the federal government, through the Department of Agriculture’s Natural Resources Conservation Service, will advise farmers and offer assistance in addition to measures to restore cropland.

"It’ll be less productive," Boyer said. "It won’t be the best soil."

Livestock farmers are dealing with dead animals that need to be disposed of properly, a matter overseen by state environmental officials. Many farmers had started the calving season, and young animals vulnerable to extreme weather conditions didn’t survive in many cases, Nelson said.

In many cases, farmers couldn’t reach livestock because roads were flooded out, according to Nebraska Cattlemen, a trade association.

Farm organizations have organized relief efforts. The Nebraska Farm Bureau set up an exchange on its website to deliver needed items to farmers who’ve suffered losses, and Nebraska Cattlemen has set up a nonprofit entity to raise and distribute money to ranchers in need, said spokeswoman Talia Goes.