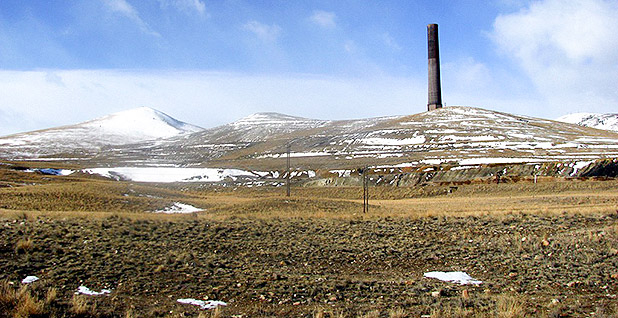 A new case on the Supreme Court’s docket has experts on edge about potential consequences for environmental cleanups across the country.

Justices last week agreed to review Atlantic Richfield v. Christian, a long-running dispute involving an old copper production area in Montana. The 300-square-mile Anaconda Co. Smelter site is one of the oldest and largest in the Superfund system.

Some 9,000 residents live within the Superfund site’s borders, many atop arsenic-laced soil and contaminated groundwater. With an EPA-approved cleanup process dragging on, dozens of landowners went to state court in 2008 to force smelter owner Atlantic Richfield Co. to do more for them.

State courts allowed the case to proceed, despite opposition from Atlantic Richfield, which then appealed the decision to the nation’s highest court.

Now the Supreme Court will determine whether the landowners can pursue a key legal claim that Atlantic Richfield must fund restoration work that goes beyond what EPA approved for the area (Greenwire, June 10).

The dispute is causing heartburn among Superfund experts, who caution the case could have unintended consequences.

"In a way, allowing these landowners to be able to question what EPA does here seems like a good environmental thing, but if we’re not careful, it could be open season on litigating EPA remedies in advance," Lewis & Clark Law School professor Craig Johnston said.

"That certainly is not where we want to be at the end of the day."

Atlantic Richfield and EPA likewise warn of legal chaos if the landowners prevail. They note that the federal Superfund law — the Comprehensive Environmental Response, Compensation and Liability Act, or CERCLA — was intended to give EPA the final say on remediation plans for contaminated sites.

"The [state court] decision also invites thousands more landowners across the State to sue to supplant EPA’s remedy or to implement remedial efforts themselves without EPA’s authorization," lawyers for Atlantic Richfield told the Supreme Court.

"And the decision provides a road map for other states to bless similar theories of recovery that run roughshod over CERCLA’s calibrated scheme," they said.

Residents of the western Montana town of Opportunity are less concerned with CERCLA’s "calibrated scheme" and more with what’s literally in their backyards. A century of copper smelting spewed toxic metals, including arsenic, that contaminated local soil and water.

EPA approved a remediation plan that required Atlantic Richfield to cart away up to 18 inches of soil in areas with arsenic levels above 250 parts per million. That’s already complete in the litigants’ yards. Now they want the company to pay for additional work to return the area to pre-smelter conditions, including removal of top layers of soil where arsenic levels exceed 15 ppm.

EPA opposes the landowners’ restoration proposal, saying it would disrupt what’s already been done and cause further environmental harm.

University of Maryland law professor Rena Steinzor, who worked on CERCLA legislation in the 1980s, said the landowners’ plight was inevitable in light of slow and sometimes ineffective remediation work on Superfund sites, the most polluted areas in the country.

"I actually think it is a symptom of how extraordinarily long these cleanups have been taking," she said, "and how frustrated the communities are that they never seem to be getting relief and how frightened they are, because arsenic is no joke."

Exposure to high levels of arsenic can cause cancer and other health problems.

Key legal questions in the Supreme Court case center on a few technical provisions of the law.

First, there’s a clause that bars most challenges to EPA-approved Superfund cleanup plans. Another restricts owners, operators and others involved in Superfund areas — "potentially responsible parties," or PRPs — from conducting any remediation work without EPA’s approval.

The landowners point to different parts of CERCLA to support their position.

One section of the law stipulates that "nothing in this chapter shall be construed or interpreted as preempting any State from imposing any additional liability or requirements with respect to the release of hazardous substances within such State."

Another notes that CERCLA does not affect "the obligations or liabilities of any person under other Federal or State law, including common law, with respect to releases of hazardous substances or other pollutants or contaminants."

Johnston explained that such "savings clauses" were included in the original statute, while the "finality" provisions relied upon by Atlantic Richfield came in a 1986 update to the law.

"The clean thing Congress could have done would have been to eliminate the savings clause or explain how the provisions work together," he said. "But Congress didn’t do any of that."

That tension between the CERCLA clauses fueled Atlantic Richfield’s case at the Supreme Court. But resolving the question will likely have much bigger impacts for Superfund sites nationwide.

‘It will be disruptive, no question’

Lawyers and scholars watching the new Supreme Court case warn about a variety of potential outcomes.

Perch-Ahern, who frequently works on CERCLA issues on behalf of industry parties, said the case threatens to inject widespread uncertainty into the Superfund process. A win for the Montana landowners, for instance, could spur more litigation from Superfund neighbors.

"If the Supreme Court specifically validates this kind of claim, then claimants may be emboldened and encouraged to be more creative with respect to cleanup claims that have some nexus to a Superfund site," he said.

But on the flip side, a win for Atlantic Richfield could create its own kind of legal uncertainty, the California-based lawyer said.

Even if the justices firmly reject the landowners’ attempt to collect restoration money from Atlantic Richfield, other Superfund neighbors could see the case as an invitation to push the boundaries for other types of state law claims.

"There’s so many different environmental claims, both pursuant to common law and pursuant to statute, and there’s going to be a real question at the Supreme Court … ‘What other claims might be preempted?’" Perch-Ahern said. "And that’s going to open the floodgates for litigation on this issue of CERCLA’s preemptive effect."

And though CERCLA is a frequently litigated statute, he said, those particular legal questions haven’t arisen often in courts, meaning the outcomes in future cases are hard to predict.

The legal uncertainty that could follow either Supreme Court outcome would be a setback for Superfund cleanups in general, Perch-Ahern said. Florio agreed, noting that increased risk of third-party litigation would make companies less inclined to engage with EPA.

"Many of the people who are responsible parties are going to be more difficult to deal with if they don’t have the assurance that when they finally agree to a scheme for cleanup that it’s a final scheme," he said. "People getting more bites at the apple will be troubling to responsible parties and will not induce them to settle quickly."

Johnston, the Lewis & Clark professor, said he’s worried a high court ruling for the Montana landowners could make room for industry abuse of the Superfund process.

"There’s a lot of provisions in play, and I’m scared to death of what the Supreme Court might do," he said.

The justices will likely have to reconcile the two sets of CERCLA provisions at play: the finality clauses that limit challenges to EPA’s cleanup plans and the savings clauses that make room for other types of claims.

"What’s sauce for the goose is sauce for the gander," he said, explaining that companies responsible for contamination could try to limit their liability by squeezing their own arguments about a site cleanup into the mold of the landowner claims at issue in the Supreme Court case.

"And there’s nothing in the statute that says only good guys get to challenge EPA’s cleanups, bad guys don’t," Johnston said.

On the other hand, said Steinzor, the University of Maryland professor, a legal shake-up could be what’s needed for EPA and polluters to speed up restoration work.

"It will be disruptive, no question," she said. "But arguably, that program needs to be disrupted."