Immigration foes try to turn NEPA into a border wall 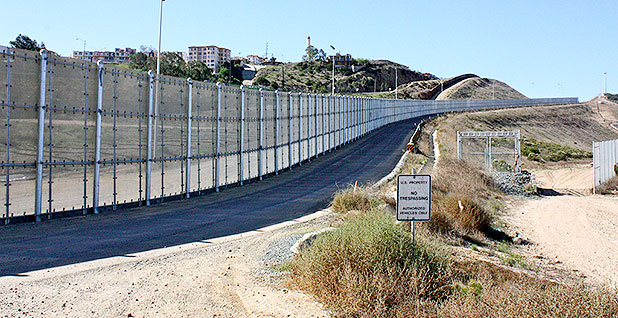 Immigration-reform advocates have opened a front in their campaign with a lawsuit alleging that the federal government has turned a "blind eye" to the environmental impacts of both legal and undocumented immigrants.

The lawsuit accuses the Department of Homeland Security of violating the National Environmental Policy Act by not reviewing the effects of its immigration policies (E&E News PM, Oct. 18).

Proponents who filed the suit in October say it’s needed to create more transparency around the effects of immigration on natural resources, air quality and water quality.

But the lawsuit has little chance of success, according to outside legal experts contacted by E&E News. And it has raised eyebrows among environmentalists, who say it’s a thinly veiled attempt by anti-immigrant groups to use the environment to advance a xenophobic agenda.

Philip Cafaro, a philosophy professor at Colorado State University whose work on immigration and the environment is cited in the lawsuit, defended the action.

"Is there a good case to be made that immigration-driven population growth has important environmental implications? The answer is pretty clearly yes in my mind," he said.

Dan Millis, coordinator of the Sierra Club’s borderlands program, slammed the suit as "another page" from anti-immigration groups’ "cynical playbook."

"These people are not environmentalists. They’re nativists," Millis said.

The Immigration Reform Law Institute (IRLI), the legal arm of the anti-immigration group Federation for American Immigration Reform, often known as FAIR, brought the suit in October in the U.S. District Court for the Southern District of California.

It accuses the Homeland Security Department of violating NEPA by failing to perform environmental impact statements for 33 actions that have allowed the "entry and settlement of a myriad of foreign nationals in the United States."

The suit says the agency improperly determined certain actions were exempt from NEPA review. It also says environmental scrutiny of steps to address unaccompanied children coming across the Southwest border was insufficient.

By not using the NEPA process, the lawsuit charges, Homeland Security has kept the public in the dark about the consequences of its immigration decisions.

Among the organizations represented in the suit are Arizona conservation districts, the New Mexico Cattle Growers’ Association, and the group Scientists and Environmentalists for Population Stabilization.

IRLI filed several affidavits from plaintiffs in support of the litigation, including a statement by former Colorado Democratic Gov. Richard Lamm.

Lamm, who served as governor from 1975 to 1987, has long been a proponent of fewer people coming into the country, blaming immigration-based population growth for sprawl in the Centennial State.

"I have watched Colorado go from a lovely state with a high quality of life to a Colorado whose front range (from Pueblo to Fort Collins) is rapidly becoming a Los Angeles of the Rockies," Lamm said. "That unspoiled, beautiful Colorado that stirred me so deeply has fallen victim to population growth, which is inseparable from mass foreign immigration."

No lawyer ‘willing to take’ case

While the suit appears to take a novel approach through the NEPA claims, this is not the first time anti-immigration groups have linked immigration to environmental degradation.

Both the lawsuit and FAIR’s report draw partly from work done by Cafaro, who last year published a book advocating for reduced immigration levels.

The complaint includes as an exhibit a 118-page analysis by Cafaro that concludes immigration has a large impact on the U.S. population, which is a "key factor in determining a wide variety of environmental impacts."

"This idea has been kicking around for a very, very long time. A lot of people who worry about immigration are environmentalists," said Julie Axelrod, an attorney at IRLI. "No one had a lawyer willing to take it until now. It’s become more clear than ever how much discretion there is in immigration policy."

Although IRLI advocates for slowing immigration, Axelrod said that wasn’t the lawsuit’s goal. "More transparency is our goal," she said. "We want the public to be more aware of the effect on the environment of people entering the country."

Along with Axelrod, the plaintiffs are represented by Lesley Blackner, an environmental attorney who has been active in development cases in Florida.

Senior District Judge James Lorenz, a President Clinton appointee, last week pushed back the deadline for the government to respond to the complaint because of the allegations’ breadth.

The delay makes the government’s initial response due Feb. 27, more than a month after the Obama administration leaves office.

The Justice Department of President-elect Donald Trump, who campaigned on a hard-line immigration platform and for a border wall between the United States and Mexico, will be responsible for responding.

Axelrod said the groups filing the suit are willing to take the case "as far as it will go." Two NEPA experts, however, told E&E News that the lawsuit is on shaky legal ground.

"Everyone has the opportunity to file NEPA lawsuits. Most of them fail," said Dinah Bear, who served for 25 years on the White House Council on Environmental Quality, the federal agency responsible for overseeing NEPA.

According to Bear, the complaint takes aim at government activities that are among the civil and criminal enforcement actions excluded from NEPA’s mandate that federal agencies review environmental impacts.

Agencies generally have discretion about whether to conduct an environmental impact statement, Colburn said, and most courts avoid holding that a programmatic EIS is mandatory for an aggregated set of agency actions.

The 9th U.S. Circuit Court of Appeals, where any potential appeal would end up, is generally more sympathetic to NEPA claims, however, than other regional circuits.

But, Colburn said, "I think the median judge on the 9th Circuit would look at this and say — rightly, in my view — how are we supposed to attribute environmental harm to the immigration policies of the United States? What theory of causation gets us from the idea that the U.S. accepts a lot of immigrations or the conclusion that that’s the cause of environmental degradation?"

He said: "There’s where it’s going to hit a fall."

Millis of the Sierra Club called the lawsuit’s NEPA claims hypocritical given the hard-line position FAIR has taken on immigration.

The Southern Poverty Law Center has labeled FAIR as a hate group "with one mission: to severely limit immigration into the United States." SPLC has linked the group’s founders and leaders to the white nationalist movement. FAIR supports a physical barrier between the United States and Mexico.

Border walls, Millis said, are "built without regard for a law like NEPA," blocking wildlife migration and destroying habitats. "These people clamoring for more border walls — they want to waive all the environmental laws."

The Sierra Club has its own relationship with the issue of immigration. It originally supported curbs on immigration but shifted position.

Club leaders quelled a controversial anti-immigration uprising in the mid-2000s. Some members left the group to form the population stabilization organization that brought the NEPA lawsuit.

The club now actively supports comprehensive immigration reform for a just path to citizenship for millions of immigrants living illegally in the country.

"The Sierra Club stands firmly behind the idea that we have to have a realistic, just system with a path to citizenship for immigration in the United States," Millis said.

Axelrod, the IRLI attorney, said her expertise is immigration law but she considers herself a conservationist. She said she would "love to approach" the nation’s major environmental organizations on immigration.

"I would very much love to hear their take on it," she said. "Most people think it’s just too controversial, and I’m really sorry that’s the case. I think you have to go where the facts lead to: The fact on immigration is that it impacts the environment."

In recent years, they have been more explicit in pointing out that low-income areas and communities of color are often the victims of environmental degradation, rather than the cause, he said.

"The idea that immigrants, particularly illegal immigrants that are living on the margins, are responsible for the ills of society," Sabin said, "is not a way to get at the deeper structural issues in society or real centers of power that are driving what’s going on."