Impeachment fight may upend agenda — or not 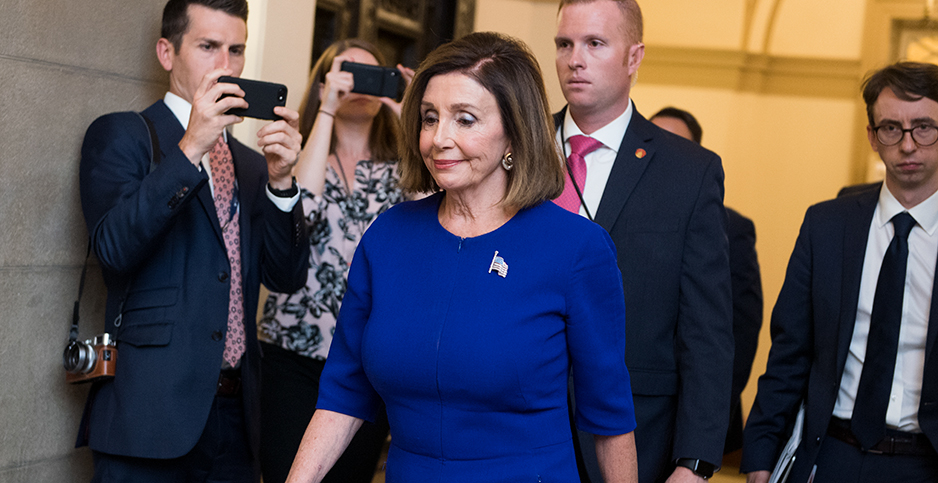 The White House yesterday threatened to bring the legislative process to a halt after House Democrats launched impeachment proceedings, injecting new brinkmanship into an increasingly tense Capitol Hill one week before government funding runs out.

But lawmakers on both sides of the aisle didn’t expect much more gridlock within Congress, at least not until the impeachment process moves beyond the current inquiry by several House committees.

Just hours after Speaker Nancy Pelosi (D-Calif.) announced her caucus’ intentions over the administration’s refusal to turn over a disputed whistleblower’s complaint, the White House suggested the move would jeopardize efforts to enact legislative priorities.

"In a far departure from all of the work and results of this President, House Democrats have destroyed any chances of legislative progress for the people of this country by continuing to focus all their energy on partisan political attacks," White House spokeswoman Stephanie Grisham said in a statement.

"Their attacks on the President and his agenda are not only partisan and pathetic, they are in dereliction of their Constitutional duty," she said.

The White House’s threat comes with lawmakers poised to approve a continuing resolution to keep the government funded before leaving at the end of the week for a two-week break. Trump previously signaled he would sign the measure, which gives both chambers until later in the year to piece together a broader spending deal.

Republican lawmakers reacted with anger. “Democrats have been working to undermine President Donald Trump since day one," said Senate Environment and Public Works Chairman John Barrasso (R-Wyo.). "Now they are beating the impeachment drum and cranking up the outrage machine."

House Natural Resources ranking member Rob Bishop (R-Utah) said the Democrats’ actions would "take Congress away from doing things that meet the needs of the people," according to a statement.

But despite the political frenzy, members from both parties who were serving in Congress during the 1998 impeachment trial of President Clinton said the practical legislative impacts may be far more muted.

"It takes over when that’s on the floor," Sen. Ben Cardin (D-Md.) told E&E News yesterday. "When you are in the midst of discussion, obviously, it’s a primary importance. And so it really does squeeze out everything else. But it’s a limited period of time."

Impeachment will immediately become the focus of key House committees that hold jurisdiction over elements of the dispute between Congress and the Trump administration, but Cardin said "very few" committees are going to be affected by the inquiry.

"They’ll be able to get their work done," said Cardin, who — as a member of the House — voted against the articles of impeachment brought against Clinton by the GOP-led House in 1998. "I think that the regular work of the House will continue to go on."

The Senate’s role — to hold a trial and issue a verdict on the charges by voting — comes only after the House votes on articles of impeachment.

"It takes time but basically doesn’t really affect operations here until the House has acted," Sen. Patrick Leahy (D-Vt.), who voted to acquit Clinton on both articles of impeachment in February 1999.

Following the House’s impeachment of Clinton, Leahy recalled that he recommended to Senate leaders that all 100 senators meet in the old Senate chamber to work out "ground rules" for the proceedings. "We did and it worked very well," Leahy told E&E News.

Senate Appropriations Chairman Richard Shelby (R-Ala.), who voted to acquit Clinton of one article of impeachment but convicted him on a second, said the day-to-day work of the chamber would continue.

"It takes a lot of oxygen out of the air but life goes on in the Senate," he said in an interview, pointing to committee consideration of several spending bills this week.

Sen. Lisa Murkowski (R-Alaska), who yesterday passed the fiscal 2020 Interior-Environment spending bill through the appropriations subcommittee she chairs, said the impeachment inquiry would have no impact on efforts to enact a broad spending deal by year’s end and head off a long-term continuing resolution.

"There’s nobody that I’m talking to that is anxious for a yearlong CR," she told reporters. "We’ve just got to keep the pedal to the metal."

Friends of the Earth Action said that "it’s about damn time" Democratic leadership formally launched an inquiry into impeachment.

"Congress must restore the checks and balances vital to a healthy democracy capable of protecting people and the environment," FOE Action President Erich Pica said in a statement.

"Trump has driven the country toward crisis with his petulant refusal to allow oversight and his use of foreign governments to attack his political opponents."

The Sierra Club tweeted: "For the protection of our democracy, the integrity of the institution of the White House, and the future of our country, it is critical that the House of Representatives holds Trump accountable for his corrupt acts by moving forward with impeachment proceedings."

Tom Steyer, the billionaire climate activist and 2020 presidential candidate, has focused on a campaign to impeach Trump for the last two years. He declared victory yesterday.

"I started Need to Impeach almost two years ago because I believed it was important to protect our country from this lawless president. Over 8 million Americans joined in that effort and today their voices are being heard loud and clear — this is their victory," Steyer said in a statement.

"No one, not even the President," said Steyer, "is above the law and he must be held accountable."