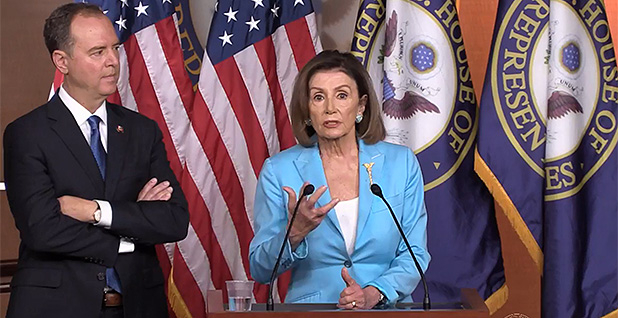 Perry’s name appears several times in a memo and draft subpoena, to be issued Friday, that are part of the Democrats’ probe of whether the president pressured Ukraine to investigate Democratic presidential candidate Joe Biden, and his son Hunter Biden, in exchange for aid.

Investigators are concentrating on Perry’s trip to Ukrainian President Volodymyr Zelenskiy’s inauguration in May. The secretary went in place of Vice President Mike Pence, and investigators have asked why the last-minute substitution was made.

Volker, who resigned from his post last week, was among those traveling with Perry and Sondland to Ukraine on May 23.

Volker is set to testify before House committees tomorrow. It is unclear from the subpoena whether the president participated in the July 10 meeting.

The Democrats are also seeking records from "current or former employees or officials of the Department of Energy" relating to Trump’s July 25 phone call with Zelenskiy.

The draft specifically names DOE adviser Samuel Buchan, who recently moved to a job in international affairs in Perry’s office. He had served since 2017 in DOE’s Office of International Affairs (Energywire, Sept. 11).

A DOE spokesperson said in an email, "Regardless of subject, the Department is always willing to work with Congress in response to requests that follow proper procedures."

"This is nothing but more document requests, wasted time, and taxpayer dollars that will ultimately show the President did nothing wrong. The Dems can continue with their kangaroo court, the President will continue to work on behalf of this country," she said in a statement.

Perry said this morning at the Innovation XLab Summit in Chicago he would cooperate with the Democratic probe.

"We are going to work with Congress and answer all of their questions," Perry responded to a reporter’s question. "I travel the world and represent the United States. I’ve had the opportunity to go into so many difference countries. … Ukraine is one of those."

Schiff warned this morning that if the White House fails to comply with the subpoenas, Trump and others would be seen as obstructing Congress.

"We are proceeding deliberately, but at the same time feel a real sense of urgency," said Schiff, who did not offer a specific timeline for completing the investigation.

Pelosi said Democrats could still work with the president on "legislating" even as the impeachment inquiry moves forward.

"I hope [Trump] isn’t saying he can’t work with us," the speaker said.