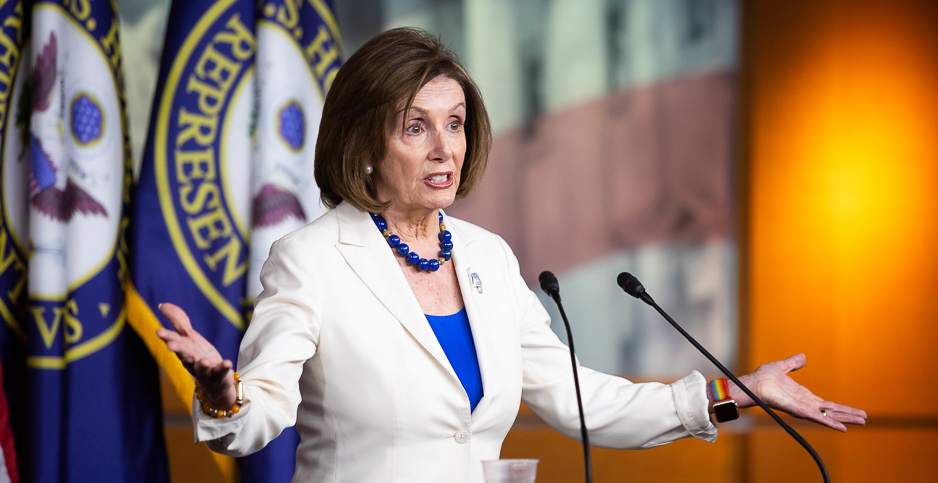 House Speaker Nancy Pelosi (D-Calif.) and other Democrats are prioritizing impeachment over legislating policies on climate change and other issues. Francis Chung/E&E News

Joe Biden promised in his presidential election victory speech "not to divide, but unify."

Two months later — as a second impeachment gains momentum after President Trump incited an insurrection at the Capitol and with Democrats beating the odds to take control of Congress — that promise looks more strained than ever.

For climate, the tensions flaring between and within parties could hobble the coalitions necessary to pass climate policy. It’s too soon to tell whether lawmakers can overcome that, Capitol Hill sources said, but they don’t have much time.

The midterm election schedule could start to pull key lawmakers onto the campaign trail as soon as later this year. Such a short window for legislative action could shrink even further if an impeachment trial eats into a Senate calendar that’s already loaded with Cabinet confirmations and pandemic-related business.

That means, with time running out to avert catastrophic climate change, the next few months could determine whether the U.S. government will get any new legal weapons for cutting emissions or if the world’s biggest historical polluter will have to rely on decades-old tools to nudge the private sector toward decarbonization.

"The numbers tell us we do indeed need to bring our carbon emissions down globally by [half] within the next 10 years," said Michael Mann, the Pennsylvania State University climate scientist famous for charting warming across human history in the so-called hockey stick graph.

"Executive action alone probably isn’t enough. I do think we need climate legislation," said Mann, who proposes a carbon price and other policies in his new book, "The New Climate War."

Sen. Joe Manchin (D-W.Va.), the swing vote who could determine the scope of Democrats’ agenda in the 50-50 Senate, has pointed to the congressional calendar as a reason to leave Trump’s consequences to the legal system rather than impeachment.

House Majority Whip Jim Clyburn (D-S.C.) suggested Democrats might wait as much as 100 days into Biden’s term before sending articles of impeachment to the Senate, even if the House votes on them this week.

That would give the Senate time to confirm Biden’s Cabinet and move to coronavirus relief legislation, he said on CNN’s "State of the Union."

"Let’s give President-elect Biden the 100 days he needs to get his agenda off and running. And maybe we will send the articles some time after that," Clyburn said.

The odds of a COVID-19 relief bill addressing climate potentially rose after Manchin said he was reluctant to approve $2,000 stimulus checks.

Instead, the West Virginia Democrat, who’s in line to chair the Energy and Natural Resources Committee, said he preferred the government put people to work building infrastructure — a principle that Biden has made central to his $2 trillion clean energy plans.

"If you want to spend $2 trillion or $3 trillion, invest it in infrastructure," Manchin said Sunday on CNN. "FDR did it in ’32. … I have played ball and gone to schools to where that was built back in the ’30s."

Democrats will have to navigate slim majorities to enact anything else. Without abolishing the filibuster, they’ll need to attract 10 Republican Senate votes to pass substantial climate policy.

Centrist carbon tax supporters have spent years cultivating such a bipartisan coalition. Even amid this month’s unrest, they say structural forces remain in their favor.

Corporate pressure, shifting attitudes among GOP voters, impacts felt in members’ districts — all of it points toward Republicans accepting a market-oriented policy like a carbon tax, they said.

"We saw in our meetings [afterward] that denialism went away, and it was more ‘What are the best policies?’" he said.

Many Democrats — even some moderates on the Hill — remain skeptical that Republicans will ever agree to substantial emissions policy, though red districts’ climate vulnerabilities might make adaptation issues easier to bridge.

Republicans still point to investments in natural gas as a way to cut emissions compared with dirtier coal, and many say they oppose renewables either on free-market grounds or because clean energy technology relies on critical minerals mined outside the U.S.

Some Republicans have signaled openness to boosting carbon capture and sequestration research and development. But that approach loses votes from the left, which opposes leaving the extractive economy intact.

Progressives, meanwhile, have not softened their climate demands. They want Biden to take a maximalist approach to executive action while using procedural maneuvers in Congress to pass climate measures with simple majorities.

On a call with members last week, Sunrise Movement leaders said they would push Democrats to enact a Green New Deal as well as measures that could expand the left’s power, such as statehood for the District of Columbia.

The group said it was planning a day of action for Jan. 21, the day after Biden’s inauguration.

"The sky’s the limit," said Shanté Wolfe, the group’s director of electoral politics.