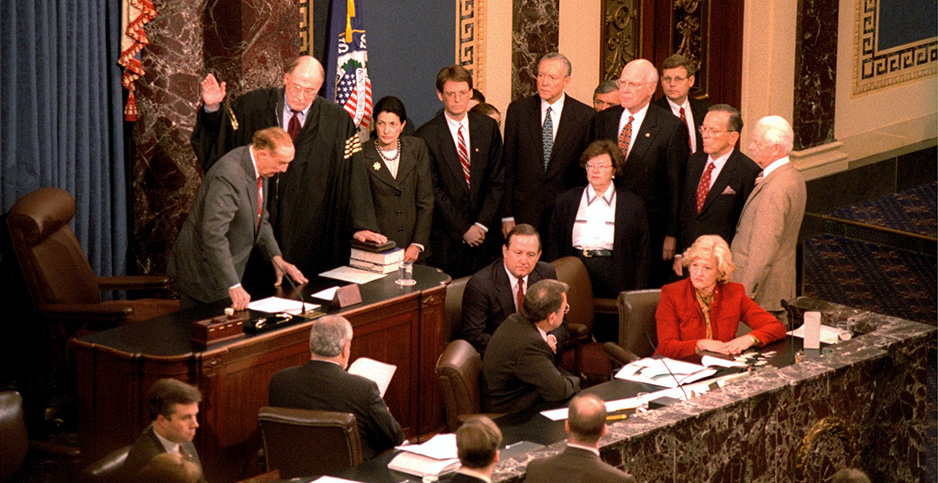 With the House likely to vote on articles of impeachment before Christmas, senators are starting to weigh what roles they might play in the historic trial expected early next year.

Speaker Nancy Pelosi (D-Calif.) set the ball rolling yesterday on the next phase by tasking committees with drafting articles of impeachment against President Trump regarding his efforts to pressure Ukraine into investigating a political rival by withholding military aid (Greenwire, Dec. 5).

Although there is no official timetable, House votes to impeach the president are expected before the holiday recess.

The emergence this week of a Senate 2020 calendar that is blank for January is further fueling speculation the trial will be held when Congress reconvenes next month.

How that trial unfolds remains anyone’s guess. Under Senate rules, after the articles of impeachment are received, the chamber must meet at 1 p.m. each day, except Sundays, "until final judgment shall be rendered."

History as a guide

The 1999 impeachment trial of President Clinton lasted nearly six weeks. Some of those days were reserved for depositions, however, according to a schedule viewed by E&E News that was among the materials discussed during the Senate Democrats’ weekly policy luncheon this week.

During that meeting, Minority Leader Chuck Schumer (D-N.Y.) counseled senators to be cognizant of the solemnity of the proceedings.

"This is among the most serious matters we will take up, and we need to act that way," Sen. Tom Carper (D-Del.) told E&E News.

That may be a challenge for senators, who typically spend the time during votes wandering and chatting with their colleagues or relaxing off the floor.

During the Clinton trial, the daily proceedings averaged between four and five hours but occasionally stretched past eight hours, according to the schedule from 1999.

"The idea of walking on and off the floor in the proceedings, having your electronics and texting or emailing while you’re on the floor, the idea of going around the floor and talking with people, is a no-no," Carper said. "You’re a jurist, you’ve got to act like one."

Senate Republicans have also discussed decorum for the proceedings.

"We’re supposed to be listening in and attentive, as opposed to reading other briefing papers or memos from your staff," said Sen. John Barrasso (R-Wyo.).

During the Clinton trial, leaders from both parties agreed to a rules package that would govern the proceedings — an idea offered at the time by Sen. Patrick Leahy (D-Vt.), who suggested all 100 senators meet in the Old Senate Chamber to hash out a deal.

That agreement allowed for committees to meet and for the Senate to hold legislative business in the morning before the trial proceedings began, Leahy told E&E News this week.

While Majority Leader Mitch McConnell (R-Ky.) and Schumer are expected to try to strike a similar deal, Leahy said it may be an uphill fight.

"It’s a different mood than we had back then," Leahy said. "Back then, you had people on both sides that wanted to get things done. I don’t know if that’s available today."

McConnell laid out three scenarios this week for how the trial could proceed.

The first involves reaching a bipartisan deal with Schumer. The second involves hashing out an agreement with 51 senators "of any particular persuasion" — seen as a veiled reference to an all-GOP package.

The third involves having Supreme Court Chief Justice John Roberts — who will preside over the trial —- referring motions submitted by senators to the chamber to be voted on, as former Chief Justice William Rehnquist did in 1999.

"That is a myriad of options, which doesn’t give you an answer, but there is no answer at this point," McConnell said.

Barrasso said he is hoping to hold hearings in the Environment and Public Works Committee he chairs. "We’re not going to slow down," he told E&E News.

But Sen. John Cornyn (R-Texas) questioned whether Democrats would agree to do so. "If you’re Chuck Schumer, would you consent to letting the Republican-led committees continue to meet? I don’t think so," he said.

Sen. Lindsey Graham (R-S.C.), whose first turn in the national political spotlight came as a House manager during the Clinton impeachment, said the Senate would likely be "shut down" and not able to pursue other legislative business during Trump’s possible trial.

Graham, however, said he would be "open minded" to a Senate rules package that could allow some other Senate business to continue during a trial. He put the odds at "50-50" that McConnell and Schumer could reach an agreement.

"It’s in everybody’s interest to have an orderly process in the Senate if it gets here, to have a process that is controllable that doesn’t get off the rails. That’s respectful of the event, that has adequate time to consider things but has an ending point," he added.

Sen. Jim Inhofe (R-Okla.), who was in the Senate during the Clinton impeachment, called the entire process a "waste of time" in 1999. He does not expect it to be much different this time around.

It’s frustrating to have 100 senators in the chamber for a trial but none of them allowed to talk during it, he recalled. "It’s not a lot of fun."

Agenda will ‘slow down’

Inhofe, the Armed Services chairman, said he’s especially concerned that if a deal on the annual defense authorization bill is not struck this month it could be further delayed by a Senate trial.

It’s been a frequent topic among senators in recent weeks about how to manage legislative deadlines if the chamber is consumed by impeachment, he said.

Even if a deal is struck to allow committee hearings and floor votes on bills and nominations, Senate Appropriations Chairman Richard Shelby (R-Ala.) said the legislative agenda will "slow down."

"It was the order of the day," Shelby told reporters yesterday of the Clinton trial, of which he also took part. "It was the only store in town."

Carper said this week it was unclear whether comity would allow the Senate’s routine business to continue even as the chamber decides whether to remove a sitting president but reiterated the momentousness of the task ahead.

"The overall message from our caucus briefing was ‘it’s not business as usual,’" he said.