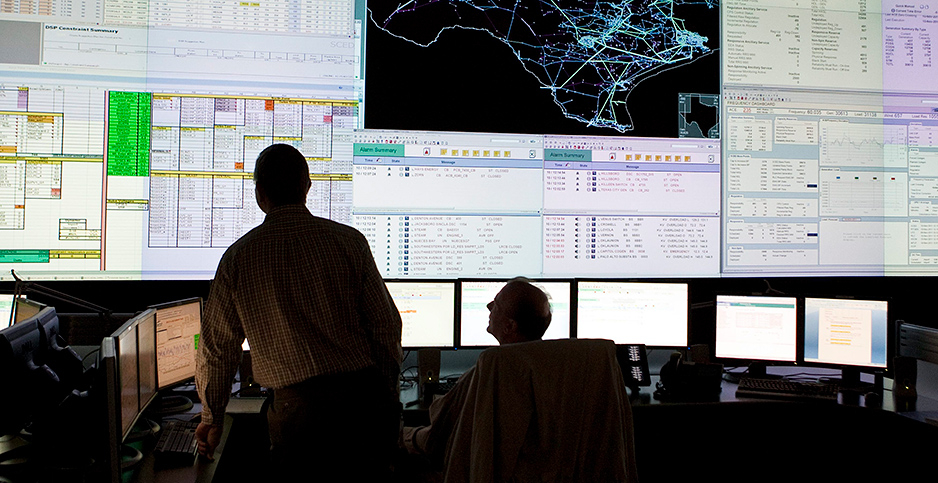 Workers are shown monitoring the Texas electric power grid at the Electric Reliability Council of Texas facility near Bastrop, Texas, in this Nov. 10, 2011, file photo. ERCOT manages the flow of electric power for millions of Texans and is facing scrutiny for this week's handling of Texas' snow emergency, which led to widespread outages. Bob Daemmrich/ZUMAPRESS/Newscom

Four years ago, a blue-ribbon committee of U.S. experts issued a grim warning to operators of the nation’s electric power networks, one that could echo today in frozen, power-starved Texas.

"Despite all best efforts, it is impossible to avoid occasional, potentially large outages caused by natural disasters or pernicious physical or cyber attacks," declared the congressionally mandated assessment by the National Academies of Sciences, Engineering and Medicine panel.

Preventing such outages would require an overhaul of current grid policies, the academy report said. It noted that responsibility for keeping life-sustaining electric power running is spread around a patchwork of state governors and utility commissions, regional grid organizations, and power companies of all sizes. "No single entity … has the authority to implement a comprehensive approach to assure the resilience of the nation’s electricity system," the report said.

Texas is a particular case. Decades ago, the state cut itself off electrically from the Eastern and Western regional grids, determined to hoard its supplies of cheap coal, according to energy historians, and management of its system resides with the Electric Reliability Council of Texas (ERCOT).

Yesterday, public anger focused on ERCOT as millions of Texans remained without power for a third day because vital parts of the electricity generation network were not prepared for a brutal cold wave that struck last weekend, plunging temperatures to 3 degrees Fahrenheit in Dallas and minus 8 F in Amarillo.

State officials have vowed to scrutinize ERCOT’s extreme weather preparations, as well as the readiness of the natural gas power generators and supply pipelines that provide the backbone of the state’s grid.

But the 2017 report spotlights a broader issue, said Jeff Dagle, chief electrical engineer at the Energy Department’s Pacific Northwest National Laboratory and co-director of its Advanced Grid Institute, a member of the National Academies commission.

With U.S. power networks headed toward a rapid, unprecedented transition to clean energy under President Biden, the worst-case planning must improve, he said. There’s an urgent need to figure out how to pay for defenses against extreme weather that may become the new normal, he added.

"The crux of this is to assure emergency resources are available for extreme events like what’s going on in Texas this week," Dagle said.

"One of the key recommendations we made [in 2017] was to do the visioning to really understand what’s possible with worst-case scenarios and to really make sure that we’re planning for these extreme events," Dagle said in an interview.

If grid planners assume a low of 15 degrees in emergency preparations, "and it turns out to be 5 degrees, that’s a whole different ballgame," Dagle said. "And I think that’s partly what they’re experiencing. It just got too cold."

This week’s blackout should bring more attention to strategic investments in hardening essential parts of the grid that can continue to function under even the direst weather or cyberattack scenarios, he said.

The need for such precautions will only grow as the power grid shifts increasingly to wind and solar generation that is not constantly available, and with output that can swing dramatically with the seasons, Dagle said.

That isn’t an argument against the transition to low-carbon power, he added. It’s how fast and how securely it’s done.

"The goals are laudable," he said. "We need to be careful."

A total of 210 individual generating units within the ERCOT footprint experienced an outage, a forced reduction to operations or a failure to start, according to an investigative report by the Federal Energy Regulatory Commission and the North American Electric Reliability Corp.

"The geographic area hit was also extensive, complicating efforts to obtain power and natural gas from neighboring regions," FERC and NERC concluded. "The storm, however, was not without precedent. There were prior severe cold weather events in the Southwest in 1983, 1989, 2003, 2006, 2008, and 2010. The worst of these was in 1989, the prior event most comparable to 2011."

This week’s temperatures were even colder.

The threat of severe weather has grim implications for generation plant owners and grid managers, Apt said. Carnegie Mellon researchers reviewed operating records at power plants in the mid-Atlantic and Great Lakes area and found something that surprised the industry officials who requested the analysis, he said.

The general assumption has been that individual power plants fail independently, for specific reasons.

"It turns out that’s wrong," he said. "There are times when a whole lot of generation can fail at the same time, generally because of very hot or cold weather."

On a normal day across a section of the grid, 3% of generation sources may have operating problems. "Take the temperature to 5 degrees, and 15% will fail," he said.

That evidence could add to the case for strategic investments in grid resilience that could mean the difference between rotating blackouts that only last for an hour per customer, and sustained outages that force people to flee from freezing homes, Dagle said.

But there may be public resistance to paying for insurance against threats that seem too far over the horizon.

Officials of the Southwest Power Pool, the grid operator in 14 states from the Texas Panhandle to the Canadian border, made that point this week in recounting their battles to keep the power on amid harshly low temperatures. SPP ordered rolling blackouts early this week to avoid a wider failure of the grid.

Mike Ross, SPP senior vice president of government affairs and public relations, said the National Weather Service had said temperatures Monday were the lowest for the region in 85 years. "You’ve heard of hundred-year floods. I mean, this is an 85-year event.

"So that becomes a discussion. Do consumers want to pay for generation that’s needed, you know, for a few days every 85 years?" he said.

The 2017 report tried to expand that point of view, Dagle said.

There has been more planning to cope with extreme events, he said. "Generally, there was a pretty good reaction to the report. But in terms of action based on it — tangible action — well, those things are harder to spot," he added.

On Feb. 25, the same committee will release an updated report on grid resilience, Dagle said.

He would not describe new conclusions in advance, but a National Academies representative said, "Everything that’s been happening in Texas is very much on the minds of committee members."