In 1895, Arctic explorers left their frozen ship. Now a redo 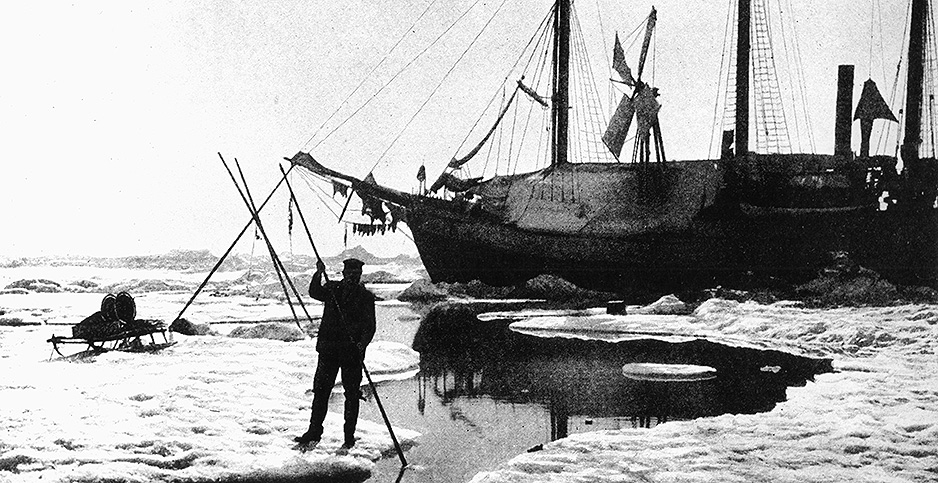 A crew member of the Fram tried spearing fish in the Arctic in July 1894. The pioneering expedition is being replicated by current-day researchers. akg-images/Newscom

Adrift on the Arctic Ocean in the midst of the dark polar winter, Fridtjof Nansen faced a dilemma.

A year and a half earlier, the 33-year-old explorer had set sail from Norway on his polar ship, the Fram, with an ambitious goal to become the first person ever to reach the North Pole. It was now the start of 1895, and Nansen was realizing that the ship might be off course and never make it.

And there was nothing that could be done about it.

Nansen’s plan to reach the pole was based around an unprecedented strategy. He would allow his sturdy wooden ship, specially built for the purpose, to freeze into the thickening sea ice as the winter set in. Ocean currents would then carry the ice, and the ship, across the Arctic Ocean — meaning the ship would be locked in place until it emerged on the other side of the sea.

Monitoring the ship’s progress, it now appeared to Nansen that the ice floe he was attached to might not drift as far north as he’d expected, dashing his hopes that the ship would cross the North Pole. He was left with a choice: Stay safely on the well-provisioned vessel and give up his dream, or risk trying to cross the North Pole on foot.

In March 1895, Nansen and companion Hjalmar Johansen loaded up a handful of dog sleds, bid farewell to the ship’s crew and set out across the ice.

He never made it. According to the Fram Museum in Norway, he and Johansen were forced to turn back after weeks of struggling to make progress. They spent the winter sheltering on a remote island in the Barents Sea and were later picked up by a British expedition, which eventually returned them to Norway.

But the Fram’s mission, on the whole, was a success. The ship emerged from the ice in 1896, after safely crossing the Arctic Ocean, and arrived back in Norway just a few days after Nansen and Johansen’s return. Word of the successful transpolar drift catapulted Nansen and his team to international fame.

More than a century later, scientists are still fascinated by the Fram’s voyage and by Nansen’s visionary strategy for getting the ship through the frozen central Arctic. So they’re giving it another shot (Climatewire, Sept. 24).

On Sept. 20, the German icebreaker Polarstern launched from Tromsø, Norway, the same town from which the Fram set sail 126 years earlier. The Polarstern will spend several weeks chugging out into the Russian Arctic. Then it will cut the engines and set itself adrift, allowing the sea ice to freeze up around it as the winter sets in. The ship arrived at the edge of the sea ice last week (Climatewire, Sept. 27).

The ship will spend the next year drifting across the mysterious central Arctic, a region scientists still know relatively little about. Along the way, hundreds of researchers will rotate on and off the ship, collecting data on everything from organisms in the icy waters to the formation of clouds high above the glittering ice.

Known as the Multidisciplinary Drifting Observatory for the Study of Arctic Climate, or MOSAiC, the project was spearheaded by the Alfred Wegener Institute for Polar and Marine Research in Germany and will involve about 600 scientists from institutions all over the world. Like the Fram, the Polarstern probably won’t cross directly over the North Pole — but it will get close, passing within 100 miles or so, the organizers estimate.

The mission’s overarching goal — to better understand the intricate Arctic climate system — may have major implications for the entire planet. Rapid melting in the far north has spurred international debate about energy production, trade routes and other international activities in the area. And many scientists believe that the warming Arctic can affect climate and weather patterns around the globe, in ways that researchers are just beginning to understand (Climatewire, Sept. 18).

The mission is touted as the biggest polar science expedition in history.

A history of Arctic drifts

But it’s not the first to build on Nansen’s idea for the sake of science. Over the past few decades, other research groups have also used drifting sea ice as an anchor for Arctic investigations.

It’s the perfect vantage point for studies of the Arctic climate system, according to MOSAiC Expedition co-lead Matthew Shupe, a research scientist with the Cooperative Institute for Research in Environmental Sciences at the University of Colorado and NOAA Earth System Research Laboratory. Sea ice is essentially the centerpiece of the Arctic climate system, mediating interactions between the ocean and the atmosphere.

By drifting with the ice for a full year, "we can really understand the life cycle of that ice as it goes through its full melt season, freeze-up season," he said. "The concept is really focused on the ice for that reason."

Since the Fram, only one other expedition has successfully crossed through the central Arctic while frozen into the ice. That was the Tara, a small Danish sailing ship that drifted with the ice across the sea between September 2006 and January 2008.

Along the way, the ship’s crew collected observations for a European research project known as Damocles, aimed at better understanding climate change in the Arctic.

Other missions have also attempted year-round drifts in other regions of the Arctic Ocean. A yearlong National Science Foundation project known as SHEBA — short for surface heat budget of the Arctic Ocean — was one of the largest undertakings of its kind when it set sail in 1997.

SHEBA didn’t drift quite as far into the central; it froze itself into the ice pack in the Beaufort Sea north of Alaska in September 1997 and ended up about 5 degrees north by the end of its yearlong voyage. Still, SHEBA yielded some of the most detailed observations of the Arctic ice pack, and its role in the climate system, for its time. The findings helped highlight the central role of global warming in the decline of Arctic sea ice and the ways that disappearing sea ice might affect the Arctic climate.

A shorter expedition, known as the Norwegian young sea ICE cruise, or N-ICE2015, provided some important updates just a few years ago.

N-ICE2015 only operated between January and June 2015, focusing on the effects of a younger, thinner sea ice cover — one of the primary consequences of warming in the Arctic. Central to the N-ICE2015 expedition was the Lance, a research vessel operated by the Norwegian Polar Institute that drifted with the sea ice during the six-month mission.

MOSAiC plans to build on the observations from these previous drifting expeditions, according to Shupe, who was present on the SHEBA mission 20 years ago. With a full-year trajectory, crossing straight through the central Arctic, and participation from hundreds of scientists from around the world, the mission promises to deliver some of the most detailed data on the Arctic climate system ever collected.

The original Fram expedition stands out as the groundbreaking mission of its time. Conducted at the height of the 19th century’s fascination with Arctic exploration, the mission captured the imaginations of polar enthusiasts all over the world. And it yielded some important scientific breakthroughs, as well.

While on board the Fram, for instance, Nansen noticed that ice floes tended to drift at something of a right angle compared with what he might have expected based on the direction of the wind. This observation would later be explained by the Swedish scientist Walfrid Ekman, who demonstrated that the spinning of Earth affects the movement of ocean water.

More generally, the expedition collected some of the most detailed physical observations of the Arctic Ocean for its time.

"We feel that it has been possible to give only an inadequate idea of the value and originality of this great contribution to oceanography," wrote Scottish geographer Hugh Mill in the introduction to a summary of the mission’s scientific findings published in 1902.

The effort to develop such scientific methods, he added, should make any future endeavor "fuller and more accurate than any similar oceanographical investigation that has gone before it."