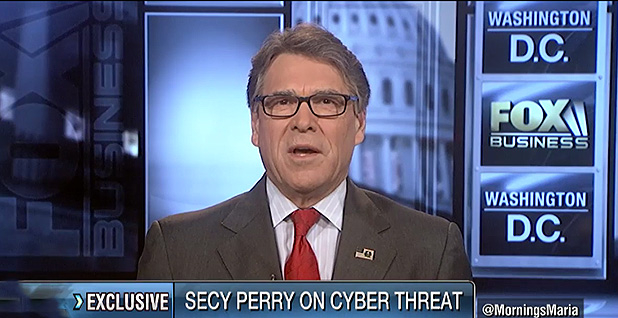 When asked about FBI and Department of Homeland Security reports about hackers attacking nuclear reactors during an interview on Fox Business Network, Perry replied, "Well, obviously it’s real, it’s ongoing and we shouldn’t be surprised when you think of the world we live in today."

When asked for details about the attacks during a White House briefing last month, Perry told E&E News, "No, sir."

While it remains unclear what organization or individuals were behind the intrusions, Perry pointed to "different groups, they may be state-sponsored, they may just be people who are criminal elements involved with trying to penetrate into certain areas."

The secretary also touted "substantial resources" at the Department of Energy being used to thwart hackers, including the Idaho National Laboratory’s
"full-out grid" effort to help detect and protect against attacks and some of the fastest supercomputers in the world.

"I want to give people comfort, this isn’t something that’s just come out of the woodwork here lately," Perry said. "We’ve been following it for a long time."

One private-sector analyst said the nuclear cyberattacks were orchestrated by a "dedicated" group of hackers "who’ve done their research" and also targeted a slew of other companies worldwide (Energywire, June 29).

It’s not clear what the hackers wanted. There is so far no evidence the intruders tried to move beyond corporate computers or cross into any of the isolated operational networks that keep the lights on and regulate the safety of radioactive material.

A spokesman for the Department of Homeland Security said the agency does not speculate on the intentions of hacking groups, noting that "our primary role is to support critical infrastructure with analysis and to provide cyberthreat indicators for computer and network defense to the community."