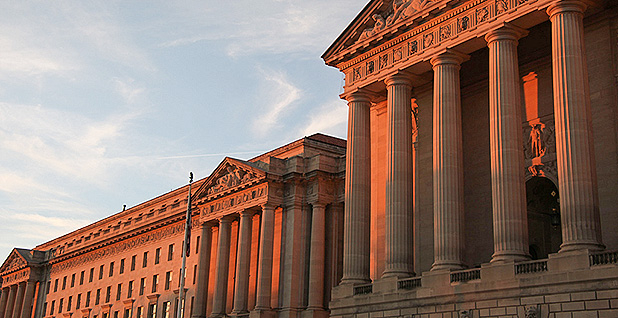 The electric power industry, which waged an epic legal battle against EPA’s air toxics standards earlier this decade, now wants the regulations kept largely intact and is urging the agency to complete a required follow-up review by a 2020 deadline.

"It is important to note that all covered plants have implemented the regulations and that pollution controls — where needed — are installed and operating," the Edison Electric Institute and several other industry trade groups said in a letter to EPA air chief Bill Wehrum released late yesterday evening.

They asked Wehrum to leave the underlying Mercury and Air Toxics Standards (MATS) in place and finish the residual risk and technology review "as expeditiously as possible."

Under a Clean Air Act timetable that EPA regularly flouts, that assessment is supposed to be done by early 2020. As part of the review, the power industry would like EPA to consider technical revisions to the standards, according to the letter.

While almost all coal-fired power plants had complied with the Obama-era standards two years ago, Wehrum in April said that EPA was "still thinking about" how to proceed (Greenwire, April 19).

The Supreme Court, ruling on lawsuits brought by utilities and Republican-leaning states, had upheld the gist of the standards in 2015.

But the court also concluded that EPA had not done enough to consider compliance costs in making its original decision to regulate emissions of mercury, a toxic metal, and other hazardous air pollutants from coal- and oil-fired power facilities. With a projected annual $9.6 billion price tag, MATS ranked among the most expensive air rules ever issued by the agency.

In a "supplemental finding" issued in response the next year, EPA officials reiterated that they had made the right decision in light of the enormous anticipated health benefits (Greenwire, April 15, 2016). That finding was also challenged in suits before the U.S. Court of Appeals for the District of Columbia Circuit.

At the Trump administration’s request, however, proceedings in the consolidated litigation have been on hold since April of last year while EPA ponders its position. As a lawyer in private practice before rejoining EPA in late 2017, Wehrum had represented utilities, but was not involved in the litigation over the supplemental finding as an attorney of record, according to a court filing. EPA is now working on a rule that will address the finding and the upcoming review in tandem, according to its latest regulatory agenda. A proposal will likely be out later this year, spokeswoman Molly Block indicated in an email this afternoon.

While power producers have long acknowledged that compliance with MATS’s requirements is a settled issue, yesterday’s letter may represent their strongest official statement to date in favor of maintaining the status quo.

The industry appears to be seeking regulatory certainty after failing to prevail in court, Richard Revesz, a New York University law professor and co-author of a book on regulation of coal-fired power plants, said in an interview this morning.

"They lost" and affected plants "have either complied or closed down," Revesz said. "I think they want to make sure they can recover their costs and probably worry that the continued legal uncertainty is creating problems on that front."

Revesz also heads the Institute for Policy Integrity, which filed a friend-of-court brief siding with the Obama administration in the litigation over the supplemental finding.

He agreed that it was also "reasonable to ask" whether a desire to see completion of the risk and technology review before the end of President Trump’s current term was a factor in the industry’s request for EPA to meet the 2020 deadline.

An Edison Electric Institute spokesman did not respond to an emailed question on that score this morning. At the National Rural Electric Cooperative Association, which also signed the letter, spokesman Dan Riedinger said the completed review would "provide greater clarity and certainty" as co-ops "continue working to provide affordable and reliable power across 56 percent of the nation."

Riedinger said the association was not aware of any prior conversations with Wehrum or other EPA staffers on completing the review by 2020 or of any commitment on EPA’s part to do so. The mercury rule was published in 2012.

Under the 1990 Clean Air Act amendments, the agency is supposed to revisit the hazardous air pollutant standards for dozens of industries within eight years after they are first issued. The ensuing reviews are supposed to determine both whether emissions control technology has since improved and whether any "residual risk" remains to public health that could be addressed by tighter standards.

EPA has routinely missed those deadlines by years. At Earthjustice, which has represented environmental groups in lawsuits aimed at forcing the agency to act on overdue reviews, staff attorney Neil Gormley said in an email this morning that he could not recall another industry asking federal regulators to meet the eight-year timetable.