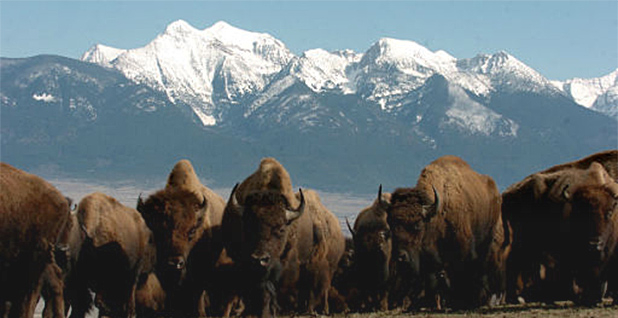 Interior Secretary Ryan Zinke has halted a plan to transfer the National Bison Range to tribal control. Photo courtesy of the U.S. Fish and Wildlife Service.

The Interior Department no longer supports legislation that would transfer the National Bison Range to the tribes whose reservation it’s located within.

"I took a hard look at the current proposal suggesting a new direction for the National Bison Range and assessed what this would mean for Montana and the nation," Interior Secretary Ryan Zinke said today in a statement. "I recognize the Bison Range is a critical part of our past, present, and future, which is why I have changed course."

Interior’s Fish and Wildlife Service last year considered backing legislation that would give the so-called crown jewel of the national wildlife refuge system back to the Confederated Salish and Kootenai Tribes (Greenwire, Feb. 8, 2016).

Then, two days before the end of the Obama administration, FWS announced in the Federal Register that it would prepare a draft comprehensive conservation plan for the range. That notice listed three alternatives, including the agency’s preferred management option: congressional transfer of land to the tribes.

A majority of comments on that proposal, however, opposed the preferred alternative, according to an initial FWS review.

Zinke cited those responses and his often-stated opposition to selling or transferring federal lands as the main reasons for the department’s change.

"That said, the Confederated Salish and Kootenai Tribes will play a pivotal role in our discussions about the best path forward," he added. "CSKT will be instrumental in helping make this significant place a true reflection of our cultural heritage."

The secretary’s statement did not mention a lawsuit Interior is facing from Public Employees for Environmental Responsibility. The department has until the end of this month to respond to a challenge from the watchdog group, which claimed the agency had failed to complete a mandated environmental review prior to proposing transfer legislation.

Out of concern about the effect such a move could have on bison or other refuges, PEER has long opposed attempts by Interior to cede more refuge management authority to the tribes (Greenwire, May 23, 2016).

The CSKT live on the 1.3-million-acre Flathead Indian Reservation that surrounds the 18,800-acre range. The refuge lands were purchased from the tribes in 1908.

But the CSKT have argued that the deal should be invalidated because at the time, such sales were often forced. The tribes also emphasize that they would maintain protections for the land and bison because of the strong spiritual ties they have to them. According to CSKT history, the bison there today descend in part from six calves brought to the area by one of the tribes’ ancestors.