In Britain, it’s nationalism minus the climate denial 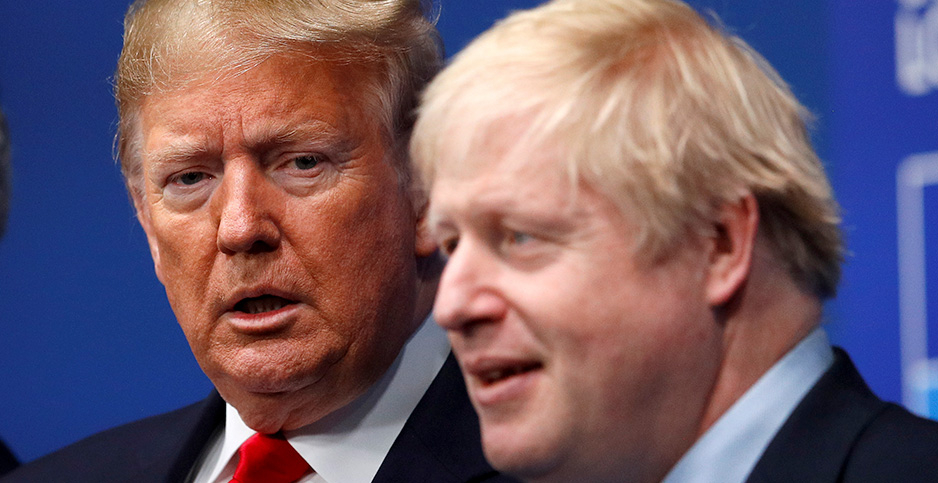 Denials of climate change have frequently hitched a ride with nationalism. Britain, it turns out, is an exception to that rule.

The British people were swept into a current of nationalist sentiment nearly four years ago when a majority of the nation voted to leave the European Union. That movement — fueled by the notion that Britain should be governed by only the British — arrived at its destination Friday with the commencement of Brexit.

Brexit occurred within a global wave of populist-nationalist attitudes that gave rise to right-wing parties in Europe and the elections of President Trump in the United States and President Jair Bolsonaro in Brazil (Climatewire, Jan. 23).

But unlike other nations, Britain’s skepticism about globalism hasn’t translated to climate skepticism.

Brexit had its roots in decades of British discontent with E.U. directives that critics saw as infringements on national sovereignty. The bloc, which until Friday united 28 countries, was a popular punching bag for British politicians and pundits who portrayed it as an expensive purveyor of unfettered immigration and onerous regulations.

"There’s not much point in having a United Kingdom if we’re governed from somewhere else," was how then-U.K. Independence Party Leader Nigel Farage put it a few months before the vote in 2016.

Brexit’s boosters stoked British discontent with the economic results of globalism while blaming immigrants for putting pressure on the availability of jobs — factors that gave rise to nationalism in other democracies.

But when it comes to addressing climate change — viewed by many as one of the most important global projects of this century, and one that both Trump and Bolsonaro have rejected — the British have shown a continued eagerness for their country to be seen as a leader.

In the same year Britain cleaved itself from its continental neighbors, it will host the United Nations climate talks in Glasgow, Scotland, in November. The conference is supposed to deliver the next round of national commitments to the Paris Agreement.

Where Bolsonaro reneged on Brazil’s commitment to host last year’s talks almost as soon as he was elected in 2018, the United Kingdom’s ardently pro-Brexit prime minister, Boris Johnson, has made the upcoming talks a priority.

Kemal Derviş, former minister of economic affairs of Turkey, now at the Brookings Institution, said the difference between Britain and other nations, like the United States, lies with the United Kingdom’s brand of nationalism. Even as it asserts greater domestic control, he said, it remains prideful of its international influence.

"The U.K. is a very outward-oriented country," he said. "The nationalism with regards to the E.U. doesn’t mean that it’s nationalist in a global context."

Research suggests that nationalist parties and politicians are more likely to dispute the facts of human-caused global warming. The Brexit Party, set up by Farage in 2018 to push for a speedy end to the nation’s E.U. membership, includes some who dispute the science. But rejecting climate change, even among the most conservative politicians, is viewed as decidedly outside the political mainstream in the United Kingdom.

"Climate contrarianism has never dominated the Conservative Party in the same way as it has in some other countries," said Richard Black, the director of the U.K.-based Energy & Climate Intelligence Unit and author of "Denied: The Rise and Fall of Climate Contrarianism." He dismissed British climate deniers as "a tiny but noisy bunch" with little influence.

It’s clear the British public believes overwhelmingly in established climate science and supports its government’s climate policies — which are ambitious by global standards.

Even as it wrangled with Brussels over the terms of departure, Britain under then-Prime Minister Theresa May raced France to become the first country committed to being carbon neutral by 2050. It won, and it remains a point of pride. A poll released last week showed that 82% of U.K. voters support the goal.

Johnson, whose untamed head of hair often draws comparisons to Trump’s coiffure, highlighted the climate goal in his postelection victory speech in December. Brexit, Johnson said, would "make this country the cleanest, greenest on Earth, with the most far-reaching environmental program."

Experts say Britain’s economy is partly why climate action is so popular. The country that started the Industrial Revolution was moving away from coal mining even before Conservative icon Margaret Thatcher angered left-leaning trade unions by closing 20 coal pits in the mid-1980s. That was followed by Britain’s "dash to gas" in the 1990s, in which newly privatized electric utilities built power plants to take advantage of British gas coming from the North Sea.

Those carbon reductions are captured in Britain’s emissions reduction commitments, which are all measured against a 1990 baseline.

"We went through the disruption of our energy system in the ’80s and ’90s as we moved from coal to gas, and that stood us in good stead for the rest of the transition," said Rachel Kyte, dean of the Fletcher School of Law and Diplomacy at Tufts University. "So it’s been possible to create a narrative around climate change which is positive."

Even measured against the European Union, the decarbonization of the British economy has been speedy and accompanied by economic growth. Black reports in his book that the European Union reduced greenhouse gas emissions 17% between 2006 and 2016, while growing gross domestic product 7%. Britain, then an E.U. member state, cut emissions 30% during that period, while its GDP grew 12%.

Green energy is now viewed as a bright spot in the British economy. The cost of offshore wind energy has plummeted. An auction held in September by the British government illustrated that the need for subsidies has effectively disappeared.

"For the first time we are not having to subsidize mainstream renewable electricity into the grid," said John Roberts, a senior fellow at the Atlantic Council, based in the United Kingdom.

And the service sector has far outstripped manufacturing as a mainstay of the British economy. The U.K. Parliament’s research arm estimates that 81% of Britain’s economic output in 2018 was from the service sector.

Britain is also an island nation, with the attendant vulnerability to sea-level rise. Plans are already underway to move the Welsh village of Fairbourne to higher ground to avoid inundation, and other communities are expected to follow.

And then there are all the ways British nationalism is different from the ideology that led Trump to flee the Paris Agreement, disparage NATO, and slap trade tariffs on friends and foes alike.

"Part of the rhetoric is actually that leaving the E.U. will enable Britain to make connections with whatever country it likes and play a role in all the multinational processes," said Black. "It’s not as simple as saying that it’s nationalist, and therefore isolationist," he continued. "In a way, it’s more nationalist, but therefore more internationalist."

Britain is proud of its foreign aid budget, which is frequently the largest in the world on a per capita basis. Britain is often the only nation in the Group of Seven that allocates 0.7% of its gross domestic product to foreign aid — the U.N. standard for the G-7, a club of major developed countries. In 2017, the United Kingdom spent approximately $18.9 billion on foreign aid, coming second to the United States at $32.5 billion, according to the Organisation for Economic Co-operation and Development. (The U.S. expenditure equated to about 0.18% of its GDP.)

"The politics of Brexit are a bit unusual," said Black. "The U.K., or this government, is determined to present itself as a responsible and active member of the international community as we go through Brexit."

Roseanna Cunningham, Scotland’s environment minister, said in a recent statement that whatever Westminster does post-Brexit, "the Scottish Government is committed to taking ambitious domestic climate action to ensure our own contribution to climate change will end within a generation and to maintaining or exceeding E.U. environmental standards."

November’s U.N. meeting in Glasgow will occur a few weeks before Britain and the European Union are scheduled to finish negotiating their post-Brexit relationship. The process is already contentious, but Black said the success of the climate conference will likely hinge on the two sides’ ability to work together.

"It’s a year of very heavy diplomatic lifting is needed, partly because the U.S. isn’t in the game," he said.

Success this year will depend on whether enough major countries step forward with new, stronger commitments to the Paris Agreement. The most important unanswered question is whether China will tighten its pledge.

Observers worry that the United Kingdom has fallen behind in its preparations for the 26th Conference of the Parties to the U.N. climate convention, perhaps because Brexit has taken up so much diplomatic bandwidth.

Johnson on Friday fired his COP president — former energy minister Claire O’Neill. In a post on Twitter, O’Neill lamented that Johnson’s Cabinet evidently couldn’t "cope" with a COP staff that wasn’t headed by a member of the government.

"A shame we haven’t had one Climate cabinet meeting since we formed," she tweeted.

Nigel Topping, the head of a pro-climate action business coalition, has been tapped to serve as "champion" for subnational and business participants at the COP. Outgoing Bank of England Governor Mark Carney will advise Johnson on climate finance.

Roberts of the Atlantic Council said he expects Scotland to use the COP to audition for E.U. membership in case Scotland were ever to leave the United Kingdom.

"The local government in Scotland will roll out the red carpet for all the E.U. figures it can and will be doing everything it can to show that one part of the U.K. is deeply committed to whatever goals the E.U. espouses to in terms of climate," he said.

"Climate is the one thing that both London and Edinburgh agree on," said Heather Conley, a senior vice president for Europe at the Center for Strategic and International Studies. "They will both use this very prominently to show their credentials. But underlying that will be deep, deep tensions as the U.K. leaves the [Brexit] transition period at the end of this year."

She said those tensions could galvanize Scottish support for independence.

Despite the United Kingdom’s generally progressive climate politics, many experts say the issue is likely to fall lower on the agenda as the country grapples with the economic and geological realities of going it alone. Brexit will certainly lessen Britain’s leverage in trade negotiations. While the European Union is eyeing carbon tariffs for exports from countries lacking comparable climate policies — like the United States — no one expects London to follow suit.

Johnson has also signaled that the United Kingdom will dealign from E.U. policies on labor and trade, and perhaps on the environment. That’s more likely to mean weaker rules rather than stronger ones.

Kyte, who grew up in Yorkshire, England, said she doubts Johnson’s government will try to repeal the United Kingdom’s first-in-the world climate law or disavow the carbon neutrality commitment.

"But will that eat away at the ability of the U.K. to drive fast towards meaningful progress in the transition? Wait to see," she said.