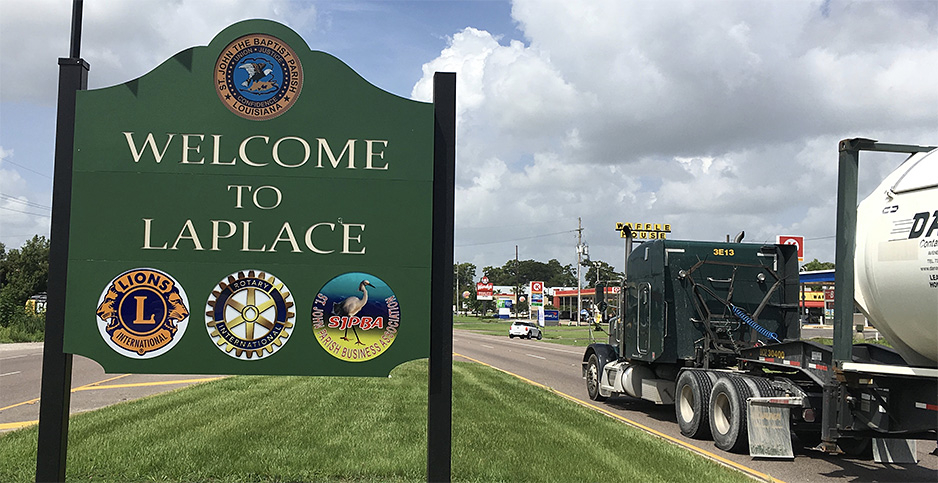 Robert Taylor feels betrayed by state and federal agencies in charge of protecting his Louisiana community from industrial pollution. So he’s trying an international approach.

St. John the Baptist Parish is the site of the Denka Performance Elastomer plant, which emits the chemical chloroprene, a likely human carcinogen that’s used in making Neoprene synthetic rubber. According to EPA, the plant is the only chloroprene-emitting facility in the country.

"No place in St. John the Baptist Parish is safe from the effects of the chloroprene and the levels of it that is dumped on us," said Taylor, who five years ago formed the Concerned Citizens of St. John, a grassroots organization dedicated to securing clean air for his parish.

Now, with the help of Tulane University Law School’s Environmental Law Clinic, Taylor and his group have filed a request for relief to the Inter-American Commission on Human Rights. They want the international body to tell the United States to halt production at the Denka facility until it can reduce emissions to a level that medical experts consider safe.

The commission can’t force the U.S. government to act. But Taylor hopes that by compelling the federal government to respond directly to his group’s concerns, the commission will apply enough pressure to convince EPA to halt operations at the plant until it can be run safely.

Catherine Flowers has experience seeking redress for environmental racism on the international stage.

Flowers is a MacArthur "Genius Grant" recipient and a member of the White House Environmental Justice Advisory Council. Since the early 2000s, she has been fighting for clean water and sanitation infrastructure in Lowndes County, Ala., and throughout the American South.

In 2011, Flowers led the U.N. special rapporteur on extreme poverty and human rights on a tour of Southern communities, which led the special rapporteur to issue a report acknowledging levels of poverty and issues like hookworm in the region that the official said he would only expect to see in developing countries, Flowers recalled.

Flowers also testified about sanitation before the Inter-American Commission on Human Rights in 2015 alongside fellow Americans from Flint, Mich., as well as representatives from communities in Brazil and elsewhere.

Following her testimony, Flowers said, members of the Brazilian contingent approached her and told her they were surprised that "what you have described in the U.S. is the same thing that we have in Brazil."

"I wasn’t surprised by it, because there are people in the U.S. that are surprised it was an issue in the U.S.," Flowers said. "People just don’t know, because they’re generally blinded by the opulence and they’re blinded by the wealth, and they don’t really see beneath that and how we have not addressed these environmental justice issues here at home."

In a phone interview, Flowers said, "Hell, yeah," residents of St. John the Baptist Parish should try to seek international recognition of their issues with the Denka facility. Her own testimony, she said, forced U.S. officials to recognize the sanitation problems directly and got her responses from the Department of State and EPA, among other acknowledgements.

Flowers points out that Japan-based Denka is a multinational corporation, so it only makes sense to her that the response to its pollution should be multinational, as well.

St. John the Baptist Parish is located in a heavily industrialized stretch of the Mississippi River often called Cancer Alley.

At least one other Cancer Alley community has also pursued relief through the Inter-American Commission on Human Rights. Residents of Mossville, La., first filed a petition with the commission in 2004 alleging that federal and local regulators had violated their right to clean air by approving over a dozen chemical facilities in their area.

Over the following six years, community lawyers parried a sequence of responses filed by the U.S. government, which argued that a clean and healthy environment is not an internationally recognized human right.

The commission ultimately ruled that environmental racism in the United States was a human rights issue, allowing the Mossville residents to proceed with their case against the federal government before the panel.

But before the groups could receive a formal hearing, chemical company Sasol Ltd., which was offered tax incentives to build a $21 billion plant on the eastern edge of Mossville, offered to buy out residents’ property and relocate them. Most of the residents agreed to the buyout, and the case was dropped.

Monique Harden, one of the lawyers who worked on behalf of the Mossville residents, said their case was still a win for human rights. She said it set a precedent that communities in the United States have a human right to clean air that the government must honor.

"What’s going on in St. John the Baptist Parish with the precautionary measures, I think, are the results of being able to blaze this trail and open this door for more people in America going to the Inter-American Commission on Human Rights for relief and remedy," Harden said.

During the time the Mossville case came to the commission, the panel was reluctant to take on U.S. cases, since the country is not a full party to the treaties governing the IACHR, said Dinah Shelton, a former president of the commission and a U.S.-based expert on international human rights law.

But President Biden, having come into office with a promise of environmental justice, may be more sensitive to criticism from the body than previous presidents.

Shelton said it’s difficult to know Biden’s approach because he hasn’t yet appointed a new ambassador to the Organization of American States, under which the IACHR operates. But Biden has nominated a U.S. national to serve on the commission for the first time since the Obama administration, a key first step in reengaging with the international body.

Sekita Grant, an environmental policy and social justice strategist with the California-based Solutions Project, said she hopes the new appeal from Concerned Citizens of St. John will be not just a moment but a sustained movement to bring acknowledgement and, more importantly, restitution for the damage caused by pollution in Cancer Alley and other environmental justice communities.

"A lot of communities across the world … are starting to step up and find connectivity with each other," Grant said. "And that kind of excites me, and these types of cases, I think, I can really support that."

Sharon Lavigne, the founder of faith-based organization RISE St. James, has also testified about her experience in Cancer Alley, or "Death Alley" as she now calls it, on the global stage. In a panel discussion in March held by a working group within the Office of the U.N. High Commissioner for Human Rights, Lavigne spoke about the pollution her parish experiences.

Lavigne, who recently won the Goldman Environmental Prize, has been fighting a proposed Formosa Plastics petrochemical complex in Louisiana’s St. James Parish for years. She said the plant would double emissions in the parish.

"It’s just like a death sentence, like we’re sitting on death row waiting to be killed," Lavigne said during the U.N. panel. "We are being a sacrifice zone for the state."

In an interview, Lavigne said she was heartened by her reception, even as she continues to press for tangible relief from the pollution.

Already, the community neighboring the proposed Formosa site is in the 86th percentile nationally for cancer risk, according to EPA data (Greenwire, Feb. 26).

St. John the Baptist Parish, where Taylor lives, is in the 99.95th percentile for cancer risk from air pollution, according to the same data.

‘What are we, guinea pigs?’

In 2016, an action plan released by EPA explained that computer modeling had found that residents near the plant were likely at a greatly elevated risk of cancer because of their chloroprene exposure.

Taylor said reading that action plan was when he realized his community is a "sacrifice zone," where residents deal with unacceptably high levels of pollution for the sake of industry.

EPA and the Louisiana Department of Environmental Quality that year started conducting air monitoring around the Denka plant. Between May 2016 and February 2018, average chloroprene concentrations were higher than 8 micrograms per cubic meter at one of the monitoring sites, on LaPlace’s Chad Baker Street.

According to EPA’s standards, 0.2 microgram per cubic meter of air is the upper limit considered safe for human health.

In March 2018, Denka added pollution controls at the plant that reduced its chloroprene emissions 85%, EPA reported. But by the end of 2020, almost half of EPA’s air monitoring samples still recorded ambient chloroprene levels greater than the threshold of 0.2 microgram per cubic meter.

In response to emailed questions, Denka spokesperson Jim Harris pointed out that EPA has never made that threshold a legal requirement. He also said Denka plans to dispute EPA’s measure of the cancer risk posed by chloroprene emissions.

Meanwhile, an EPA spokesperson said, the agency is continuing to monitor emissions in the parish.

On June 15, EPA sent an information request to Denka requiring the company to turn over its own air monitoring data and other information. EPA will use the information to determine future rulemaking on chloroprene emissions under the Clean Air Act, the spokesperson said.

Taylor and his group’s filing with the Inter-American Commission on Human Rights wants the Denka facility shut down until chloroprene emissions can be brought below 0.002 microgram per cubic meter — that’s the health-protective value established by EPA, a standard the agency uses to ensure that the pollutant in question adds only a one-in-a-million cancer risk to people breathing the air over the course of their lifetime.

Taylor has lived in the parish his whole life. He can recall when the Denka facility — then owned by DuPont — was first built in St. John the Baptist Parish in the 1960s, and white neighbors fled and sold their homes to Black families.

"When I look at all of the facts surrounding this now, you know, we were obviously the low-hanging fruit, and they decided to come in there and that the people who lived there could be sacrificed," Taylor said. "Their lives weren’t worth anything."

Taylor wants the international community to pressure the United States to stop greenlighting sacrifice zones and hold Denka and other facilities in Louisiana to account.

"This is really crazy. This has to stop," Taylor said. "What are we, guinea pigs? Or no, I think what we go back to is we’re a sacrifice zone. And I’m beginning now to understand more clearly what that means."