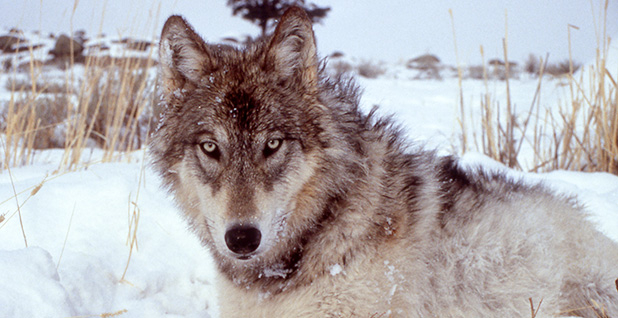 A federal appeals court today upheld the Fish and Wildlife Service’s 2012 decision to remove gray wolves in Wyoming from the endangered species list.

A three-judge panel of the U.S. Court of Appeals for the District of Columbia Circuit ruled that FWS reasonably found that Wyoming had adequate plans to ensure a healthy population.

The decision reverses a lower-court ruling that restored federal protections for the wolves.

"The record demonstrates that the Service reasonably and adequately responded to concerns about the reliability of Wyoming’s management plan," Judge Judith Rogers, a Clinton appointee, wrote for the court.

The Fish and Wildlife Service has tried for nearly a decade to turn northern Rocky Mountain wolves in Wyoming over to state control, but up to now it has been rebuffed by the courts.

FWS’s first attempt to delist wolves in Wyoming came in 2008. But after a court overturned that rule, FWS determined that Wyoming was behind in establishing the needed protections and went ahead with delisting in just Montana and Idaho.

When courts overturned FWS’s decision to delist wolves in Montana and Idaho, Congress stepped in and directed that the delisting be reinstated in the two states.

In the meantime, FWS worked with Wyoming to help the state make changes to its regulatory structure, which included the establishment of a permanent trophy game area in which wolves were managed as game animals by the Wyoming Game and Fish Department.

Wyoming also committed to maintain at least 10 breeding pairs and at least 100 wolves, not including the population in Yellowstone National Park and the Wind River Indian Reservation, within the state.

Satisfied with the improvements, FWS issued a rule in 2012 delisting the wolf in Wyoming.

Defenders of Wildlife and other environmental groups challenged the rule, arguing that FWS relied on "vague and unenforceable" promises to protect wolves. In 2014, the U.S. District Court for the District of Columbia agreed with the environmentalists, finding that FWS couldn’t rely on a nonbinding management plan from Wyoming as a basis for delisting the wolf.

FWS and Wyoming appealed the decision to the D.C. Circuit.

Oral arguments last September focused on whether FWS should have required Wyoming to ensure a buffer above a minimum population level. When it delisted the species, FWS decided against requiring a numeric buffer, reasoning that the state would maintain a buffer anyway because it’s practical (E&E News PM, Sept. 23, 2016).

At arguments, Rogers questioned Wyoming’s commitment to maintain a buffer, pointing to the state’s court briefs that argued Wyoming has no legal obligation to keep the population above a minimum level.

In her opinion today, Rogers again faulted the state’s position, calling it a "sleight of hand" that "may lend some credence" to environmentalists’ concerns.

But, she said, FWS "exercised its judgment in a reasonable way" in concluding that Wyoming’s management plan for the wolves was adequate.

In order to delist a species, the service must consider the state’s existing regulatory mechanisms and a broad range of conservation efforts. The service is allowed to consider efforts that aren’t legally binding, Rogers wrote.

The opinion also said that FWS has "years of experience in evaluating what is reasonably likely to be implemented and effective" and that it had looked to what happened in Montana and Idaho after delisting. Both states maintain populations "well above" minimum targets, Rogers noted.

The service could reasonably conclude that Wyoming’s efforts were "sufficiently certain to be implemented."

The Wyoming case is one of two lawsuits in front of the court over wolf protections. A separate lawsuit led by the Humane Society of the United States challenges the government’s decision to carve out a population of gray wolves in the Great Lakes region to remove Endangered Species Act protections.

The issue in the Great Lakes case, which is still pending, is separate and of "more consequence," Bob Dreher, senior vice president of conservation programs at Defenders of Wildlife, said last month in Washington.

"It really raises the question of how the service can go about delisting portions of a large, wide-ranging species," he said.