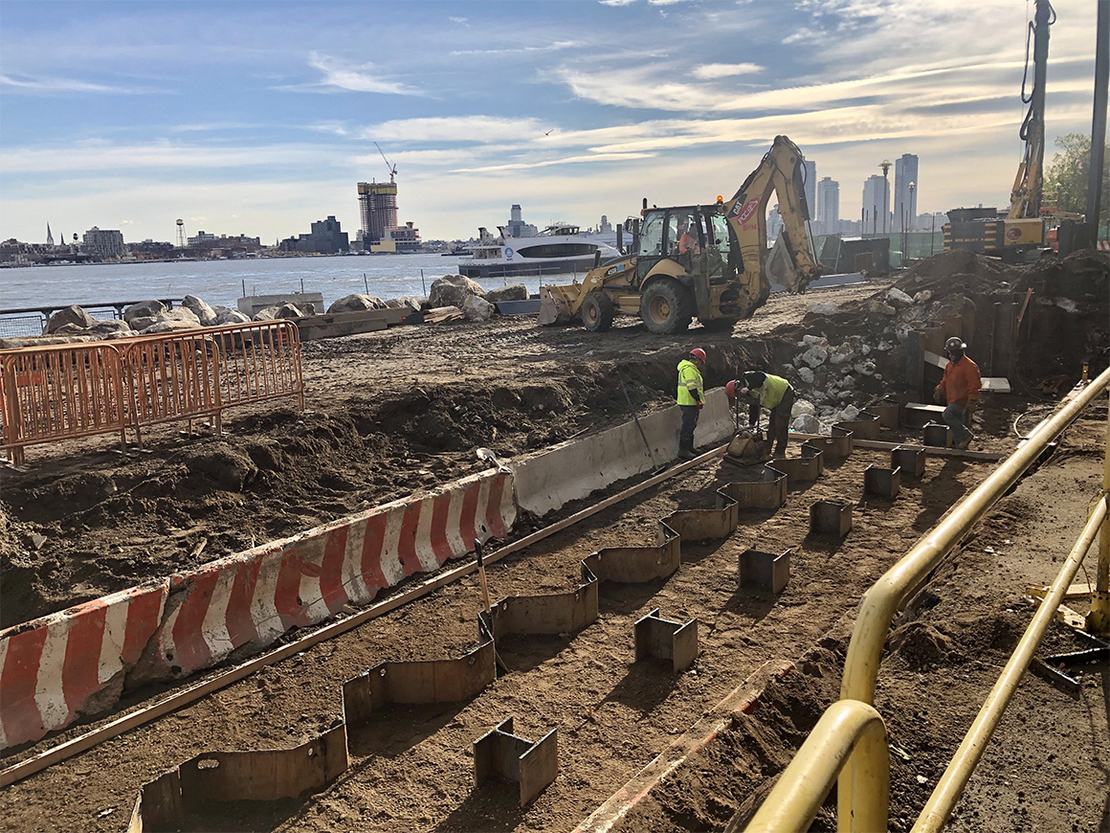 Crews pour concrete along the East River near East 20th Street for part of a new sea wall that will stretch 2.4 miles along lower Manhattan as part of the city’s East Side Coastal Resiliency Project. Rob Hotakainen/E&E News

NEW YORK — After years of planning by city officials, New Yorkers got a close-up glimpse of the trade-offs inherent in the fight against climate change when crews this month began cutting down the first of a thousand trees targeted for removal in John V. Lindsay East River Park.

Since the chain saws arrived two weeks ago, workers have moved quickly to get rid of more than 70 species of mature trees at the popular 46-acre park on the Lower East Side, including 419 oaks, 284 London planes, 89 honeylocusts and 81 cherry trees — along with eventually demolishing a running track, ballfields, lawns, picnic areas, an amphitheater and a composting center.

“What’s the point of paying a parks department that cuts down trees?” asked Karen Kapnick, one of a small group of protesters who watched in horror, peeking through a chain link fence next to Franklin Delano Roosevelt Drive as workers denuded the first dozen trees. “I’m just here because I care about the trees and the environment.”

City officials say the tree removal is just a necessary first step to creating a bigger and better park. More importantly, they say, the remade East River Park will be better able to withstand storm surge even as the waters surrounding lower Manhattan rise in the coming years. Once all the work is finished — projected in about five years — the new park will be raised 8 to 10 feet higher, with new recreational facilities and 1,800 replacement trees representing more than 50 species more suited to survive occasional saltwater floods.

The park overhaul, spurred by the destruction of Superstorm Sandy in lower Manhattan nearly a decade ago, is all part of a $1.45 billion flood protection project that backers say befits the nation’s largest city, a massive project that will include the construction of a 2.4-mile system of walls and gates along the East River.

“We’re the parks department, so we obviously are very fond of trees and plants,” said Sarah Neilson, chief of policy and long-range planning for the New York City Department of Parks and Recreation. “We also recognize that after Sandy we had to take out 250 trees that died just from that one intense saltwater inundation. They’re not species that were designed for a coastal environment.”

When Mayor Bill de Blasio unveiled final details of the plan in 2019, he called the project “a very, very big undertaking." Its outcome could be watched closely as other cities embark on resilience projects of their own and encounter the hard choices required when remaking urban landscapes in the face of global warming.

“It is audacious, but most of all, it is necessary,” said de Blasio, a Democrat.

But the city’s ambitious plan has provoked a loud uproar in the waning days of de Blasio’s term as mayor, which will end Dec. 31.

Some critics have already given de Blasio, who’s now considering a run for governor, a new nickname: Tree-Kill Bill.

Anger at the mayor hit a boiling point last week after his opponents accused him of ignoring a court order that called for a temporary stop to the tree removal. But a state appeals court judge on Thursday sided with the city and allowed the East Side Coastal Resiliency Project to go forward.

The plan has also set off a hot debate over the health of the trees and whether it has made any sense to cut them down.

“They were planted in 1939, and a lot of these trees, their life span is 80 or 100 years, so they’re already kind of starting to falter,” Neilson said.

Amy Berkov, an ecologist at City College of New York who has lived in the East Village since 1979, disputed this, saying the city’s own data showed that 92 percent of the trees were targeted for design reasons, not because of their condition. She said one of her students even measured the diameter of a sampling of trees for a class project and found they had grown by an average of more than 2 inches since 2015.

Berkov called the destruction of the trees “incredibly demoralizing” but said the city’s quick action to get rid of them as soon as possible came as no surprise to her.

‘We forget Manhattan is an island’

Wearing a white hard hat and a lime green vest during a recent visit to the sea wall construction site, Jainey Bavishi, the director of the New York Mayor’s Office of Climate Resiliency, surveyed the work underway near East 20th Street, where crews were pouring concrete for part of the wall.

“It’s actually the first flood protection project of its kind in a dense urban environment anywhere in the world,” Bavishi said, straining to be heard over the roar of construction trucks and car horns from the nearby Manhattan streets. “I think there’s a lot of planning that’s happening for flood protection projects, but nothing of this scope or scale.”

Bavishi, who is up for a climate-focused position in the Biden administration, said that planning for the project began in 2013 and that it will provide flood protection for 110,000 New Yorkers, including 28,000 people who live in low-income housing.

Bavishi said the East Side “was really devastated by Hurricane Sandy” and deserves the city’s attention.

“New York has 520 miles of coastline, so we have been working to make sure that we’re integrating flood protection into the waterfront. … And it’s a priority for us to protect this community from future coastal storm surge,” said Bavishi, who oversees a $20 billion climate resilience budget under de Blasio.

The work is welcome news to Trever Holland, 55, a former corporate lawyer whose building went dark after succumbing to the storm surge when Superstorm Sandy hit the Lower East Side in October 2012.

Altogether, nearly 90,000 buildings were flooded, 44 people died and more than 2 million New Yorkers lost power, many living without it for weeks. Total damages were estimated at a whopping $19 billion.

“It was hell,” said Holland, who decided to get involved and is now the chair of the Parks Committee on Manhattan Community Board 3. “It was pretty bad, but we all learned.”

Like many New Yorkers, he said he ignored the warnings to leave before the storm battered the city.

“We’re a bit jaded about evacuations,” Holland said. “It’s also New York City, and you think of it as being impenetrable and no hurricane is going to affect us. … I knew nothing about resiliency and flood protection and those particular issues because it didn’t affect me in my whole life, but since that point, I’ve learned a lot. We all learned. We forget Manhattan is an island.”

The park, which opened in 1939, was renamed in 2001 in honor of former New York City Mayor John V. Lindsay, who led the city during the tumultuous years in the late 1960s and early 1970s. It’s the largest open green space on the Lower East Side, sandwiched on a narrow strip between FDR Drive and the East River.

The park, which stretches from Montgomery Street to East 12th Street, served as a shipping yard in the 1800s and once was home to the city’s poorest immigrants.

Bavishi defended the plan to elevate the park, saying the new wall will provide flood protection at the water’s edge without interfering with views: “You’ll still be able to able to see the water if you’re in the park, and you won’t see the wall.”

The project includes renovations at a handful of other city parks and playgrounds as well.

In Washington, Bavishi has used the resilience project as a calling card of sorts, calling it "one of the most technically complex" ever done and citing her experience overseeing it as a qualification to land a top job at NOAA. President Biden tapped her for the post of assistant secretary of oceans and atmosphere in July. Earlier this month, the Senate Commerce, Science and Transportation Committee approved the nomination, but the full Senate has yet to vote (E&E Daily, Nov. 18).

Holland, who lives a few blocks from the park, counts himself a strong supporter of the project but said it has suffered from a lack of local press coverage in New York, with “misinformation really playing a role” in the news vacuum.

“It will actually save the park and protect a lot of tenant residents, and I think that’s forgotten,” he said.

Holland, who’s also happy the city has promised that part of the park will always be open during construction, said he regards the project as a matter of environmental justice. But while a good chunk of the new sea wall is already in place north of East 15th Street, he said he worries more court fights could delay flood protection for his neighborhood and others farther south.

“If a storm comes long in a couple years, a richer neighborhood will be protected and a lower-income neighborhood won’t,” he said. “We’re delaying flood protection for thousands.”

‘Nobody believes this is resiliency’

While Bavishi spoke to reporters at the construction site on Dec. 7, protesters gathered at the park only a few blocks away to watch the first trees come down, calling it “a day that will live in infamy.”

Pleading for the work to stop, they said de Blasio was guilty of “ecocide” by killing the trees. City workers, protected by New York City police officers who were called to the scene, put up a “No Trespassing” sign on a chain link fence to keep them away.

“I think we’ll be all right,” he replied.

One of the protesters, Emily Johnson, a neighborhood resident who called herself a “land and water protector,” said she arrived early before the work began so she could get behind the gate to apologize to the trees on the city’s behalf.

“I’m devastated,” she said, accusing city officials of advancing “a colonial and capitalist value system” over the environment. “I was able to go in here and say I’m sorry to these trees. … They have lived here and protected this neighborhood for 80 years.”

Among other things, she said she feared the loss of the trees would only worsen high rates of asthma in the neighborhood, and she criticized the city for doing nothing to reduce emissions on the busy six-lane highway next to the park.

Kapnick, a protester from a neighborhood farther uptown, said she came to the park to defend the trees, criticizing the city’s plan to get rid of them and saying it would take decades for the replacement trees to yield any results.

“Little saplings are not going to help with climate change — that’s what the whole point of this is supposed to be,” she said. “I am so disgusted by this plan.”

In an earlier interview, one of the leading opponents, Eileen Myles, a poet and writer who has lived in the neighborhood since 1977, recalled her long history with the park.

“When I was young and could not afford a gym, it was the only access to exercise I had,” she said.

Now she said she worries that the park may never come back, saying “there’s nothing green about de Blasio or the way they’re dealing with the city right now.”

“It’s a land grab,” Myles said. “This is just development. Nobody believes this is resiliency. … The joke we have is that if you can take it here, you can take it anywhere — it’s up to you, New York, New York.”