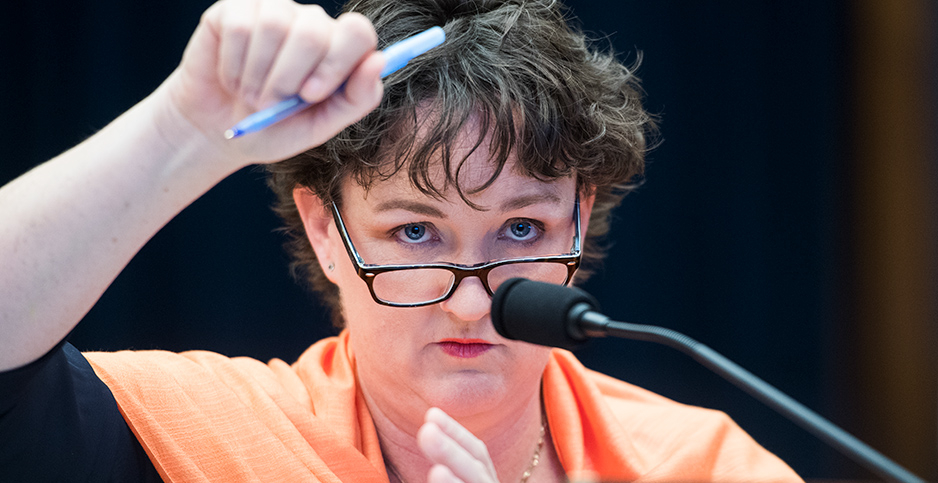 Rep. Katie Porter spent the last two years drawing out some of the most revealing, and damning, admissions from executives of major banks and pharmaceutical companies. She could now be poised to do the same with leaders of the oil and gas industry.

The second-term California Democrat is the new chair of the House Natural Resources Subcommittee on Oversight and Investigations, and she is pledging to use her platform to take on the "polluters" of public lands and expose their abuse of taxpayer dollars.

Porter also has no plans to shy away from revisiting, perhaps even relitigating, the past actions of the Trump-era Interior Department, which was run by officials with major oil and gas ties, if it could help inform the public’s understanding of the scope of the industry’s influence.

She’ll do so even as an ally, progressive Democratic Rep. Deb Haaland of New Mexico, could be confirmed as the new Interior secretary as early as next week.

"We’re trying to understand to what degree is the fossil fuel industry, either through donations to members of Congress or though controlling the administrative process," driving policymaking, Porter told E&E News in a recent interview.

"The committee’s job is not to kind of decide what is and was not good policy in the past. Really, it’s about laying that foundation for good policy going forward," she continued. "But to do that, sometimes you have to look at what’s happened in the past. … There’s a lot of work for Deb Haaland to do, and for some of it, she will need partners in Congress to help her fix."

Porter is wading into politically perilous territory. The Biden administration’s early executive actions targeting oil and gas have opened up an emotional national debate on the future of fossil fuels.

Republicans have shown an eagerness to demonize Democrats for supporting an agenda they say will destroy jobs and local economies. Democrats have accused Republicans of being motivated solely by loyalty to their industry donors.

These talking points, and finger-pointing, are likely to persist right up to the 2022 midterm elections, where Porter is among the dozens of Democrats being eyed by Republicans for defeat to take back control of the House.

Porter — who took virtually no campaign contributions, if any, from oil and gas interests in her first two years of congressional office — isn’t personally worried about making enemies there. In fact, she feels strongly that her constituents want her doing this type of work.

"I represent a Republican seat," she said. "I’m the first Democrat to represent my area in 70 years. And I’ve actually found, even before coming to Congress, that oversight and accountability for guarding against waste, fraud and abuse — guarding against special-interest influence — actually is one of the most fundamentally bipartisan kind of issues that you could work on."

She quipped, "I don’t hear people saying, ‘I’m a Republican; I like to have special interests cheating the taxpayer,’ right? Or ‘I’m a Democrat; I’m pro-letting lobbyists write policy.’"

Porter’s appointment as the chair of the Natural Resources Subcommittee on Oversight and Investigations comes on the heels of her losing her spot on the considerably higher-profile Committee on Financial Services, where her cross-examinations of witnesses often went viral.

She told E&E News she’d had to be strategic about her committee assignment requests for the 117th Congress. In asking for seats on Natural Resources and Oversight and Reform, she didn’t receive a waiver from party leadership to also serve on Financial Services, which as an "exclusive" committee requires lawmakers to sacrifice other opportunities to retain membership there.

Porter’s allies called it a slight and a lost opportunity for Democrats, as the congresswoman had become the party’s invaluable weapon for eviscerating embattled titans of finance.

Wielding props, charts and a dry-erase board, the former law professor and eighth-grade math teacher would elicit illuminating answers by asking sharp questions, all while breaking down complex concepts that got public opinion on her side.

"The tax breaks, the influence of lobbyists, etc. — these issues are important issues, and they don’t get enough attention," Grijalva said. "If Katie can bring attention to them, great."

Porter said she would be applying the same tactics to her new subcommittee leadership assignment, and the role of influence would be central to her agenda.

"The use of props, the use of simple language, mapping things out to show people — I think that’s really very helpful," she recently told E&E News of how she’ll translate her work on other committees to her new role on Natural Resources.

There are similarities, Porter added, between the rhetoric deployed by fossil fuel executives and banking leaders with the intent to obfuscate and alienate the public, namely "the use of acronyms and [saying], ‘Yeah, this is complicated, and you can’t understand it. Just trust me.’"

She said she viewed her job as "lay[ing] out for people" the facts, and taking "areas that people often think of as very technical and thinking about how to make those issues accessible."

She previewed this approach at a virtual hearing yesterday of the Natural Resources Subcommittee on Energy and Mineral Resources. She also left little room for debate about the agenda she’ll pursue on her own subcommittee (see related story).

Her H.R. 1517 — one of five measures being discussed yesterday that would address the future of fossil fuels on public lands — would raise royalties, rental rates, inspection fees and penalties on oil and gas companies that extract resources on public lands.

"Since the last royalty increase in 1920, technology has changed and become more efficient, the economy has changed, but the royalty rate has stayed the same," Porter explained in her opening statement, where she also defined "royalties" for the uninitiated.

Had the rate gone up at all over the years, she continued, oil and gas drilling "could have generated $12.4 billion in the last decade — money for schools, hospitals, rural development, conservation projects. My bill would make that happen."

But ultimately, Porter said, "we have to change the way our country thinks about energy and natural resources. We have to account for the negative externalities of oil and gas."

By the end of a tense exchange with one of the invited witnesses — Mark Murphy, the president of the New Mexico-based oil and gas producer Strata Production Co. — Porter was firing back against evasive responses and accusations that her questions were predicated on misunderstandings of terminology and tax law.

"Please don’t patronize me by telling me the oil and gas industry doesn’t have any special tax provisions," Porter told Murphy, "because if you would like that to be the rule, I would be happy to have Congress deliver."

‘We disagree on very core values’

Porter said she hopes there will be some bipartisan consensus around the issues she wants to address — if not the issue of oil and gas drilling on public lands, then at least the question of how to make sure industry players are good actors.

"Across the board, I think there’s concern about wanting to make sure that the government’s doing what it says it’s going to, that it’s efficient, that it’s using our taxpayer dollars wisely and the policy’s been made in a fair way," she told E&E News of the influence of oil and gas over the legislative process.

But she’s also prepared for her positions to not be popular with colleagues across the aisle. She got called out during yesterday’s hearing by Rep. Yvette Herrell (R-N.M.) for calling Murphy an "oil baron," a pejorative title the freshman lawmaker said was "out of line."

Earlier, when asked whether she had any hope of working well with Oversight and Investigations Subcommittee ranking member Paul Gosar (R-Ariz.), Porter said she wasn’t optimistic.

"To the extent that Mr. Gosar is opposed to public lands, that he’s opposed to protecting our environment, then it’s going to be difficult to find common ground, when we disagree on very core values like that," she said.

Gosar remarked during the hearing yesterday that Porter had little appreciation for the circumstances of fossil fuel-producing states, then noted how California was complicit in purchasing foreign oil.

"I would point out to my colleague, Ms. Porter, who just joined this committee, you may not be aware of California’s dependence on foreign oil … [but] in 2019, because of policy choices similar to some of the bills laid before us today, California purchased nearly 90 million barrels of Saudi Arabian oil … nearly $5 billion from the Saudi royal family in 2019," he said.

Porter said ultimately it was her love of her home district in Orange County that drew her to the Natural Resources Committee in the first place.

"As I made this decision to join Natural Resources, one of the really exciting things about it was that the district that I represent is 50% preserve land," she said.

"I live in a beautiful but environmentally sensitive part of the United States, an area that has seen its economy and jobs created a lot by that, by those natural resources, everything from the coast to the mountains," she said. "The opportunity to work to protect that, it was really, really exciting."