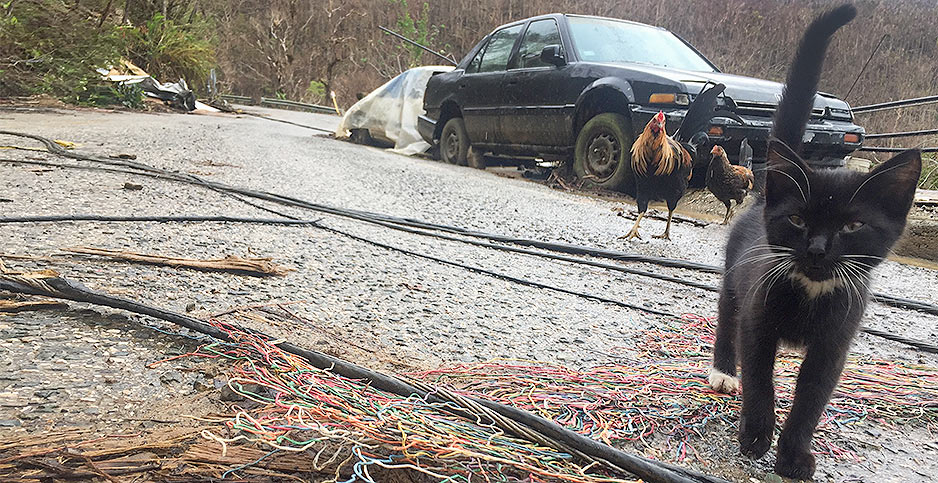 SAN JUAN, Puerto Rico — Ask Milagro Alicea what she misses most about having electricity, and she raises a hand to caress her hair, which lies limp against her ear. "My hairdryer," she says wistfully, and with just a hint of irony. With so much devastation around her, hair is the least of her worries.

Alicea, 55, is the principal of Dr. José M. Lázaro High School in the Carolina neighborhood east of San Juan. In the weeks after Hurricane Maria swept across the island, she had been in grubby clothes and her "Maria hairstyle," as she puts it, cleaning up the tangle of downed trees and branches that turned the central courtyard, and its large shade trees, into a zone of fierce tropical sunshine.

The school enrolls 730 students. Two Fridays ago, only 42 showed up. The status of many of the missing is unknown, since the phones don’t work and the buses aren’t running. These days, José M. Lázaro is more of a community center, offering free meals to anyone who shows up and accepting students from kindergarten to high school. The little kids draw with crayons, and teachers lead the bigger kids in playing basketball, or decorating the walkways with chalk, anything to distract them from the chaos. With no air conditioning, classrooms are so hot that sweat beads on your brow even if you sit perfectly still.

People in the energy industry often struggle to explain to others how modern life would simply fall apart without electricity or diesel or natural gas. Puerto Rico is offering a real-time example — or rather 3.5 million examples, since virtually every resident of the island has had his or her life turned upside down by the energy crisis, often in ways that one would never expect.

On the Milla de Oro, or Golden Mile, in downtown San Juan, traffic jams arise at any time of day, since the traffic lights are dark. Convenience stores have plenty of beer but no bottled water. When the generator cut out at the Institute of Forensic Science and visitors reported a horrible smell, the director rushed to assure the newspaper El Nuevo Día that its cadavers remained frozen.

Life has become strange. Bees drift through the open windows of people’s houses, looking for any sort of nectar, since all the flowers have been blown away. So many trees were felled that an aviary’s worth of birds, even big parrots, perch on the inert electric lines.

The power outages disempower even the powerful. Generator failures have turned the reporters and editors of El Vocero, one of the country’s main newspapers, into nomads, as they’ve moved the newsroom from the newspaper’s printing plant to the conference room of a Doubletree hotel to the cafeteria of a chemical company an hour out of town, according to its president, Salvador Hasbún. (They haven’t missed an issue.)

State senators, their offices hot and computers dead, loiter in the lobbies of fancy hotels for free Wi-Fi. José Román Morales, the interim president of the Puerto Rico Energy Commission, climbs 21 stories to his high-rise apartment via an unventilated stairway.

America has seen big blackouts, such as the Northeast blackout of 1965, which cut power to more than 30 million people — for half a day. A 1977 blackout took out New York City — for two days. Even Puerto Rico has seen its share of long post-hurricane outages. But the United States has never seen a blackout affect this many people for this long. The most conservative estimate for restoring power to the entire island is six months.

In the midst of such disorder, Puerto Ricans have regained some patterns of normalcy. San Juan hasn’t seen the looting that characterized the New York City blackout. Fuel deliveries have returned and shortened the endless gas station lines, and enough restaurants are open in some cities that people without refrigerators can find something palatable to eat. On Sunday mornings, the fitter citizens of San Juan ride their bikes in pelotons along the coast road. Young people socialize at La Placita de Santurce, among the shuttered discos, but retreat before the midnight curfew.

But it’s early. Puerto Ricans are expressing anger at the relief effort, since government aid workers have occupied almost every hotel with electricity in San Juan (Energywire, Oct. 10). The government here reports that about 17 percent of electricity has been restored, but that papers over the daily reality. The official number, expressed in megawatts of energy delivered, means that certain critical and energy-hungry parts of civilization have been restored, like hospitals, water-pumping stations and the airport. But people don’t live at the airport. Almost no homes or businesses have seen their grid power return.

In such an environment, items that had been taken for granted attain great value, like backup generators and their diesel fuel.

Generators grind throughout the crowded barrios. If a building is lucky enough to have one of sufficient size, residents can turn on the air conditioner and sleep through the Caribbean humidity. But pity the neighbors who must endure not just the sticky heat but the fumes and roar of the machine, which runs all night with a buzz like a jumbo lawn mower.

And having a generator doesn’t do any good without fuel, a fact that is hampering the recovery of communications on the island, where roughly 40 percent of telecommunications is still knocked out. Luis Morales, the owner of Signa Group, a contractor that is doing cell-tower restoration work on the island, told E&E News last week that while some cell towers are offline because of physical damage from Hurricane Maria, far more are down because their diesel tanks are empty.

That communications infrastructure, starved of diesel, warps people’s behavior. Drive for miles through darkened countryside and you suddenly find dozens of cars parked on the shoulder, their hazard lights blinking. The drivers have found a working cellphone tower. They stare at their phones, idling their engines to run the air conditioning while also burning gasoline, another fuel so precious it is still rationed.

At Farmacia 129, a pharmacy across the street from the main hospital in the city of Arecibo, customers can buy prescription drugs. But since the business’s internet is down, it can’t contact insurance providers. "What might have been your $10 prescription becomes whatever it costs," explained Jeff Counts, a Missouri disaster-management volunteer helping out at the hospital.

"The hardest part is sleeping in the dark. And the heat. And bathing," said Mariela Reyes, 41, who is sitting with her feet immersed in the Río Mamayes. To the west rise the mountains of El Yunque National Forest, which is normally a riot of green but is now so uniformly brown and stripped of leaves that it looks like a wildfire torched it.

She is wearing a pink-and-blue bikini top and is washing clothes. Normally, she would just throw them in her washing machine and the dryer, but with both her power and the water out, she is spending two hours here, creating suds with a blue scrub brush and adding detergent to the jungle river. She pulls back in fright when a couple of fish flop right in front of her.

"Look, where I live, there no water, no light, no telecommunications. There’s lots of things I can’t find at the store. Milk, batteries, juice," she said.

Her husband, Miguel Cruz, 46, stands up on the bank by his Ford pickup, smoking a cigar. The road guardrail was bent horizontal by the floodwaters. The steel power poles on the other side of the road, he noted, have been stood up after being flattened by the hurricane, but they still don’t seem to be lighting anything.

Cruz works at the warehouse for SuperMax, a grocery store chain, "but it’s slow," he said. He looks worried. With the refrigerators down, the warehouse is moving only dried food, like rice, and anything that comes in a can. He has acquired a generator, after driving to San Juan and waiting 16 hours in line and paying a $500 markup. He and Mariela run the generator at night, but the diesel adds $140 a week to their expenses. A small bag of ice, usually $1.55, now goes for $5.

The link between electrons and employment has become apparent to Puerto Ricans.

Marilyn Lopez, 52, has a business near El Yunque making baskets from acacia trees. It has shut down, she said; the table saw can’t run, and even if it could, the stores she sells to are closed. Her six employees are out of work. In the capital district of Bayamón, the lack of electricity means that tattoo artist Omar Nieve can’t power his needles, while his neighbor, Shelia Grafal, is finding that warm beer doesn’t lure customers to her bar. Pedro Pereira, a San Juan dentist, has sent home his two hygienists and cancels 20 appointments a day because someone stole his tank of diesel.

Tourism and its jobs have also taken a hit. The waves at Piñones, a popular surf spot, are as good as ever, but the waves crash empty of surfers. On the patio of the Caribe Hilton in Old San Juan, a peacock struts with no one to admire it but a bored security guard. The adjacent Rosa Mexicano restaurant had the "X" on its sign blown away by the winds, along with the jobs of whatever waitstaff, busboys and cooks worked there.

The hunt for water dictates the day of Nereida Lopez, a mother of two, who is among the 34 percent of the island that has no running water because of the unpowered pumping stations.

On the side of a highway outside of Maunabo, on the island’s southeast side, she squats by a public water station, filling dozens of empty soda and detergent bottles. "We have to wait in lines because there are so many people," she said.

After she fills, her husband, Amado Serrano, ferries the bottles to their white Mitsubishi, where he jams the trunk full of them and puts the remainder in the back seat. This is their morning routine, for water to wash their clothes. Now they’re back in the afternoon to get the water for drinking, bathing and cooking.

Two days from now, they’ll be back to do it again.

The costs of an endless blackout mount for others in still more personal ways. Marisol Plard-Narváes is a former university art instructor who lives in the poor San Juan neighborhood of La Perla. A few weeks ago, her youngest daughter took Plard-Narváes’ two grandchildren to New England indefinitely because the mother wanted the kids to have the kind of energy and connectivity that other Americans can take for granted.

"Take away my electricity and my water," Plard-Narváes said, shaking her head sadly. "But don’t take away my grandchildren."