In reversal, court rules U.S. not on hook for Katrina damage 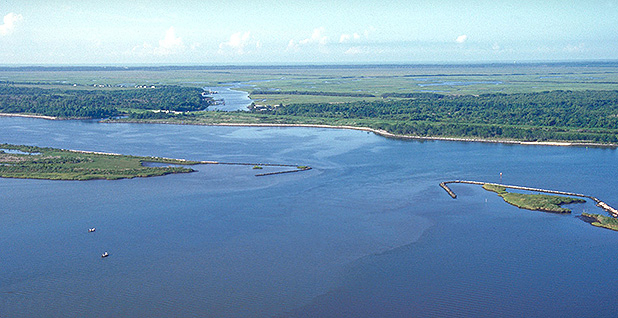 The Mississippi River-Gulf Outlet canal at Lake Borgne, a sound on the Gulf of Mexico, approximately 15 miles east of New Orleans. Army Corps of Engineers/Wikipedia

The court reversed a decision by the U.S. Court of Federal Claims that put the government on the hook for damages.

"We conclude that the government cannot be liable on a takings theory for inaction and that the government action in constructing and operating MRGO was not shown to have been the cause of the flooding," Judge Timothy Dyk of the U.S. Court of Appeals for the Federal Circuit wrote.

MR-GO is a 76-mile channel built by the Army Corps of Engineers in the 1960s as a shorter shipping route between the Gulf of Mexico and the Port of New Orleans.

During Hurricane Katrina in 2005, the breach of that channel caused major flooding. In response, Congress directed the Army Corps through the 2007 Water Resources Development Act to close MR-GO and restore the surrounding ecosystem.

The plaintiffs in St. Bernard Parish Government v. United States, who own property in St. Bernard Parish and New Orleans’ Lower Ninth Ward, argued that the government was liable for catastrophic flooding during Katrina, through both its construction and operation of the channel and its failure to address erosion issues.

Over the decades, MR-GO has increased the salinity of the water and destroyed wetlands that had previously acted as a buffer to flooding. Plaintiffs alleged the Army Corps failed to reinforce its banks or repair erosion that had caused the channel to widen and carry more water.

In 2015, Judge Susan Braden of the Court of Federal Claims sided with the plaintiffs, writing in an opinion that the navigation channel created a "ticking time bomb" that caused massive amounts of damage to landowners during Hurricane Katrina.

Braden, who was named chief judge of the court last year, wrote that that damage qualified as a "temporary taking" under the Fifth Amendment. She cited the Supreme Court’s 2012 ruling in Arkansas Game and Fish Commission v. United States, which established that temporary flooding can give rise to takings claims.

Braden also found that there was little doubt the Army Corps should have foreseen that MR-GO would cause problems.

"Certainly by 2004, the Army Corps no longer had any choice but to recognize that a hurricane inevitably would provide the meteorological conditions to trigger the ticking time bomb created by a substantially expanded and eroded MR-GO and the resulting destruction of wetlands that had shielded the St. Bernard Polder for centuries," Braden wrote. In 2016, she awarded compensation to 11 representative properties (Greenwire, May 4, 2015).

But Dyk, who was appointed to the Federal Circuit by President Clinton, faulted the claims court for basing the liability finding in large part on the government’s failure to maintain or modify the channel.

In other words, the court incorrectly based liability on government "inaction," rather than an "affirmative" act.

"A property loss compensable as a taking only results when the asserted invasion is the direct, natural, or probable result of authorized government action," Dyk wrote. "On a takings theory, the government cannot be held liable for failure to act, but only for affirmative acts by the government."

The Federal Circuit also found that the lower court, when weighing the government’s construction and operation of the channel, failed to take into account the levee system that the Army Corps built to address the flooding issues with MR-GO.

Dyk wrote that the decision was "inconsistent" with Supreme Court and Federal Circuit precedent that all government actions must be considered when weighing takings claims. The plaintiffs did not present evidence showing that flooding had been worse compared to if there had been no government action at all, he wrote.

"The result is that the plaintiffs failed to take account of other government actions … that mitigated the impact of MRGO and may well have placed the plaintiffs in a better position than if the government had taken no action at all," the opinion says.

Judges Pauline Newman and Alan David Lourie, who were both appointed by Republican presidents, joined Dyk in the opinion.

Friday’s opinion likely brings to an end the long and complex litigation saga over flooding damage stemming from Katrina. The case has been going on so long because the claims court stayed litigation to allow other lawsuits to proceed in federal district court and the 5th U.S. Circuit Court of Appeals.

The decision will also likely affect other pending litigation in the Court of Federal Claims over the government’s role in flooding events. It has been an important case testing the scope of the Supreme Court’s 2012 holding.

The ruling "represents a potential landmark precedent limiting the extent to which the government can be held financially responsible for flood damages, an already serious challenge for private landowners that will only get more serious with advancing climate change," said John Echeverria, a takings expert at Vermont Law School.

The Court of Federal Claims is currently hearing two massive lawsuits over the government’s liability for flooding last year in Houston during Hurricane Harvey and during the past decade in the Missouri River Basin.

In the Harvey case, property owners contend that the Army Corps is liable for flooding damages because of its decision to open the spill gates of two Houston-area reservoirs. The claims court is hearing dozens of individual claims and two class-action suits (Greenwire, Nov. 20, 2017).

Echeverria said the Katrina decision means the case will likely hinge on "the level of flooding [that] would have occurred if the dams had never been built to begin with."

In the Missouri River suit, landowners in Nebraska, Missouri, Kansas and Iowa are seeking damages for more than 100 flood events over the past decade that they say were caused by management changes the Army Corps made to protect endangered species.

Judge Nancy Firestone of the Court of Federal Claims in March agreed that the government is responsible for flooding. The court is now weighing the extent of landowners’ losses and whether the government has a viable defense against their claim it took private property without just compensation (Greenwire, March 14).

"An important issue after St. Bernard Parish is whether landowners along the Missouri River still enjoyed greater protection from flooding than they would have if the projects had not been built," Echeverria said.